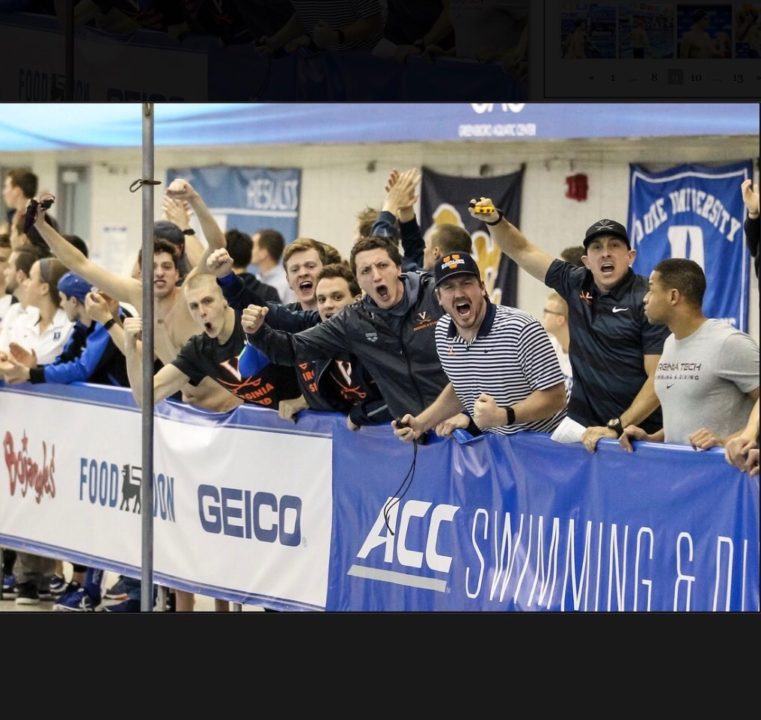 With Todd DeSorbo looking to switch things up, Auburn and Virginia will draw events from a hat on the go to determine the event order for tomorrow's dual in Charlottesville. Archive photo via Credit: Karl Moore/UVA Swimming

We all know that dual meets can sometime be a bit…less than exciting, and that even applies to dual meets in October between two storied programs.

The UVA coaching staff knows this as well as anyone, and head coach Todd DeSorbo decided he wanted to switch things up a little bit for Friday’s home meet against Auburn.

It helps that that DeSorbo and Auburn’s head coach Gary Taylor were on the coaching staff together at NC State and are “fast friends,” as Virginia’s associate head coach, Tyler Fenwick, put it, and Taylor readily agreed.

So, on Friday, the event order for the meet will be picked out a hat as the meet goes.

Swimmers will know which events they will be swimming, but won’t know until moments before the race that they’re up next, meaning they’ll have to be ready to go the whole session, or at least until their final event of the session is done.

There will be two sessions, 10am and 5pm, and all of the standard first half events will be in the morning, and all of the rest in the afternoon.  The schools will contest both medley relays and the two shorter free relays.

It’ll be just the 2nd meet as head coach for Taylor, who landed the gig at Auburn after the departure of longtime coach Brett Hawke earlier this year.  The Auburn women ranked 15th in our initial power rankings, while the Auburn men, dealing with the early losses of last year’s stars Zach Apple and Hugo Gonzalez, were unranked.  The women beat Florida Gulf Coast 163-73 last week, while the men’s team has yet to compete.

The Cavaliers, meanwhile, have gotten off to a strong start to the season, having swept dual meets against Penn State and Pittsburgh, and with the women finishing 3rd at the SMU Classic a couple weeks ago.  Megan Moroney currently ranks in the top five in the nation in two events, as do three Cavalier relays.  We ranked the women 9th and the men 12th in the first edition of our power rankings.

I attended this morning’s session and while it may have kept the swimmers engaged–not that they wouldn’t have been anyway….it was not fun as a spectator. The PA system in that building is a joke and you can’t understand anything the announcer says (garbled), so you could not tell what event was being swum until seconds before the race started and was posted on the score board.

I love the idea, but not the execution. Sounds like Auburn is looking for an excuse as to why they will lose handily to the UVA men. OR… someone lost a bar bet a few years ago in a hole in the wall drinking establishment within the confines of Raleigh, NC. I would like to see what times UVA could put up with normal rest between events, but agree that typical duel meets are getting a bit boring. Also, do they pull an event out and it says “100 Breast” so then the women swim it followed by the men? If so, then the men have a distinct advantage. Or do they say “hey its womens event time, and its…… Read more »

Men and women swam the same event, so yes, women would do the 50 free then the men would.

If they are going for the element of surprise, then that doesn’t seem fair does it? Men have time to get ready, women do not. Especially for something like say the 1000.

They did have 5 minutes between the draw and the swim, so gives the swimmers a little time.

Pure GENIUS what an exciting and creative methodology!!!

Sorry, I don’t think this setup brings any benefit to anyone. That much more difficult for coaches to strategize and for swimmers to be fully ready mentally and physically.
Any way- Good luck to all. Exciting close meet to follow!

I think at this time of year, you’re looking at anything you can do to keep your swimmers engaged, keep them pushing themselves, and to have a little fun. 80% of the comments after dual meets are about how much nobody thinks they matter anyway, so if you can engage your team in a unique way, why not do it?

I’m going to watch the meet, but only the first session, so what events will that cover (obviously in no particular order)?

They should fix the boring problem by putting more effort into hyping the meet up. Dramatic team walkouts, and good announcers that make the team scores exciting to follow

Sure could. Now THAT is a meet I’d buy a $5 ticket to watch.

Not quite. The normal first half events will all be in the morning, and second half events in the evening. So, don’t think you’ll end up with 100/200 of a stroke back-to-back, but you could see the 200 free followed by the 50 free.