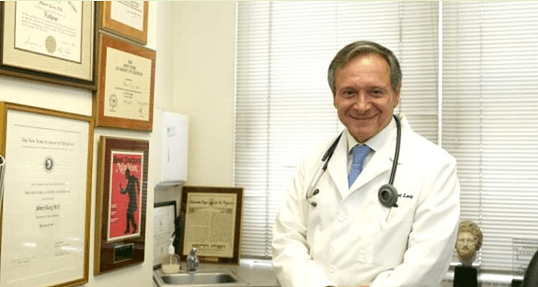 Going to Rio? Dr. Albert Levy has advice on how best to stay safe, healthy, and Zika-free during your travels. Current photo via Manhattan Family Practice Website

Note that SwimSwam is not a medical website, and while Dr. Levy is a Medical Doctor, you should consult directly with your physician who understands your specific medical conditions. This article is not intended to be patient education and does not create any patient-physician relationship.

For many athletes, coaches, and fans, the decision to attend the 2016 Olympic Games in Rio de Janeiro comes with a set of unique risks. Luckily, Dr. Albert Levy is here to help. Dr. Levy is an expert not only in the field of medicine, but also in the health and hospital systems of Brazil and Rio de Janeiro.

“Those traveling next month will have the best experience of their lives in terms of being Olympians and being in Rio de Janeiro, a beautiful city,” he said. “Unfortunately, because of corruption, disease, and violence, people will need to be careful.”

It’s more than just Zika. There are four mosquito-borne viruses you should be worrying about.

There are four blood-borne diseases transmitted by the same mosquito that Rio travelers need to be aware of. Zika, yellow fever, Dengue, and Chikungunya each can be spread from human to human by mosquitos of the genus aedes aegypti.

Although the four viruses will exhibit different symptoms, oftentime the result is flu-like: headache, nausea, joint pain, fever, skin irritation and rashes, vomiting. Symptoms for all four usually last from a few days to a couple of weeks. However, such symptoms can and will spell defeat for athletes needing to compete at top form.

“If you have symptoms [of the Zika virus], literally, you will be underperforming” ” said Dr. Levy.

If you have flu-like symptoms, do not take aspirin!

According to Dr. Levy, the most important thing to remember about Zika, Dengue, and Chikungunya is that they deplete the red blood platelets from your blood stream. These are needed for your blood to coagulate. Medications that also deplete platelets include anti-inflammatories like aspirin and ibuprofen (Advil).

“One of my patients here in New York, a 31-year-old woman, contracted the Zika virus, was prescribed Advil at an urgent care center, and almost died,” he said. “She was bleeding from every orifice.”

Medicines that contain acetaminophen, such as Tylenol and Paracetamol are better alternatives.

Doctors in Brazil may prescribe a medicine called Novalgina. Stay away from it!

Here are Dr. Levy’s 7 ways to avoid bites from the disease-carrying mosquitos.

Although Zika is most commonly known for being transmitted by mosquitos, it can also be transmitted by all types of sexual contact. Using condoms and other types of barriers can reduce the risk of spreading the virus.

In the same vein, Zika causes microcephaly and other severe birth defects and may also cause Guillain-Barré Syndrome or Landry’s paralysis in men and women.

“If you’re pregnant or planning to be pregnant, Brazil is not the place to go,” says Dr. Levy.

It’s also important to remember that couples should wait at least eight weeks after the return of either partner from Brazil before trying to get pregnant.

Vaccines to Get Before You Leave

There is no vaccine for Zika, Dengue, or Chikugunya, but there are still vaccines that you need to get before you travel to Brazil.

Advice on the Rio Hospital System

According to Dr. Levy, travelers in Rio are best off using the private hospital system rather than the public ones, which aren’t up to international standards. His hospital recommendation?

In case of emergency, here are the numbers to call:

Dr. Levy also has tips and tricks for tourists to avoid the violence of Rio de Janeiro, especially during the hustle of the Olympics. Many of these are common sense for travel, but they’re worth the reminder.

The Rio 2016 Olympics will be an incredible experience for athletes and spectators alike. However, it’s important to do your research before embarking on any international travel. For more information, check out your country’s Brazilian embassy or consulate website (for Americans, look here).

Albert Levy, MD, was the U.S. consulate doctor in Rio de Janeiro from 1982 to 1986. Dr. Levy received his MD from the Federal University of Rio de Janeiro, and he often returns to Rio to do research with the medical community. He currently lives in New York, practicing medicine at Manhattan Family Practice on Park Avenue in New York and holding academic appointments at the Mount Sinai School of Medicine, the New York Medical College, and the Albert Einstein College of Medicine. For several consecutive years, Dr. Levy has been featured on the list of Top Doctors in the United States and in New York. He will be on site at the Olympics next month.

He didn’t point out that since it is winter in Brazil, the chances of a mosquito born illness are low. Good article, but feeds into media hysteria on Zika.