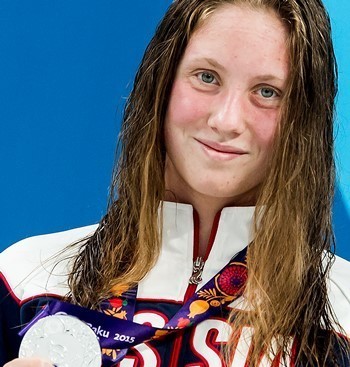 During the first session of Short Course Euros, Kirpichnikova managed to shave 2 seconds off her own former Russian record in the event. Archive photo via Andrea Masini, Deepbluemedia

During day 1 prelims at the 2021 European Short Course Swimming Championships, Russian swimmer Anastasiia Kirpichnikova posted an event-leading swim of 8:08.44 in the women’s 800 freestyle to set a new Russian record.

The swim by Kirpichnikova constituted an improvement upon her own national record in the event, which previously sat at an 8:10.62. She set that former mark back in 2019 at the short course Russian Championships.

You’ll note in her splits that beginning with the first 100 of her swim in 2021, she was nearly 2 seconds ahead of her 2019 swim and held that margin fairly consistently throughout the race. Kirpichnikova’s quick start gave her the early lead in her heat at 2021 Euros as she was the only swimmer in her heat under 1 minute at the 100-meter mark. Isabel Gose was second at the 100 with a 1:00.19 split, followed by Imani de Jong (1:00.39) and Martina Caramignoli (1:00.61).

As the event continued, Kirpichnikova only extended her lead over the field and ultimately touched in an 8:08.44, which was more than 8 seconds quicker than second-place finisher Caramignoli’s 8:16.80.

Across both heats, Kirpichnikova was still in first place after prelims as Simona Quadarella posted an 8:14.35 to win heat 2, trailing her own entry time of 8:10.30, which she swam 2 years ago to win the Short Course Euros title. Quadarella’s lifetime best, however, is an 8:08.03 which she swam back in 2018 at the World Short Course Swimming Championships.

Quadarella is the 12th-fastest performer in history in the event and Kirpichnikova now sits at #17 behind Katinka Hosszu’s 2014 swim of 8:08.41.