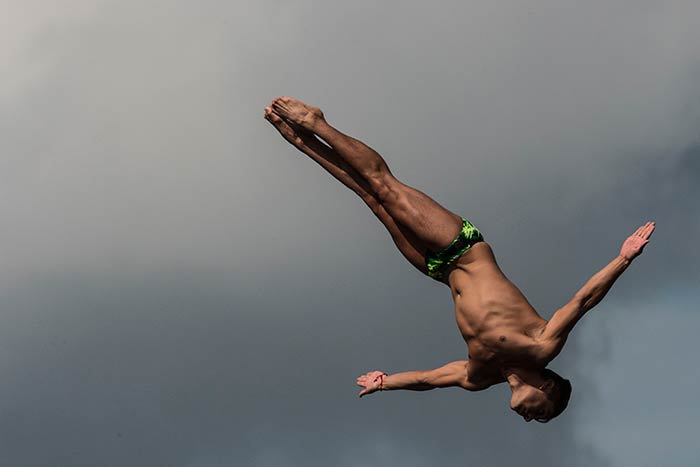 The final two rounds of the men’s 27m high diving took place today from Budapest, as the 2017 FINA World Championships come to a close.

In the end it was American Steve LoBue who won gold, posting a final score of 397.15 points. The silver medal goes to Michal Navratil of the Czech Republic with a score of 390.90, and bronze was won by Alessandro Da Rose of Italy (379.65).

LoBue formerly competed for Purdue University in the NCAA, and now trains in Fort Lauderdale. Coming out of the opening two rounds in 4th, LoBue moved up to 2nd after his third dive, and performed the dive with the second highest degree of difficulty in the competition on his last dive to wind up with gold.

Great Britain’s Gary Hunt is the man who attempted the most difficult dive of the competition, which he ultimately missed, falling to 5th after leading through three rounds.

I would not want to miss a dive from that height. I’d end up in the city morgue. 27 meters is 88.56 feet above the water. You likely hit the water at around 60 mph. Thanks, but no thanks!

Launch at a wrong angle or have a little slip up, and you’re going to be KO’d immediately upon hitting the water

How do they train. By jumping out of 10 story buildings into the water? I’d only do that if I was Superman or Clark Kent, mild mannered reporter for the Daily Planet.

No doubt. Jumping off the 10 Meter feels like hitting a wall…………”take me home in a shoe box”
Pretty crazy height. What is the concussion rate in this spot or can they wear helmets?