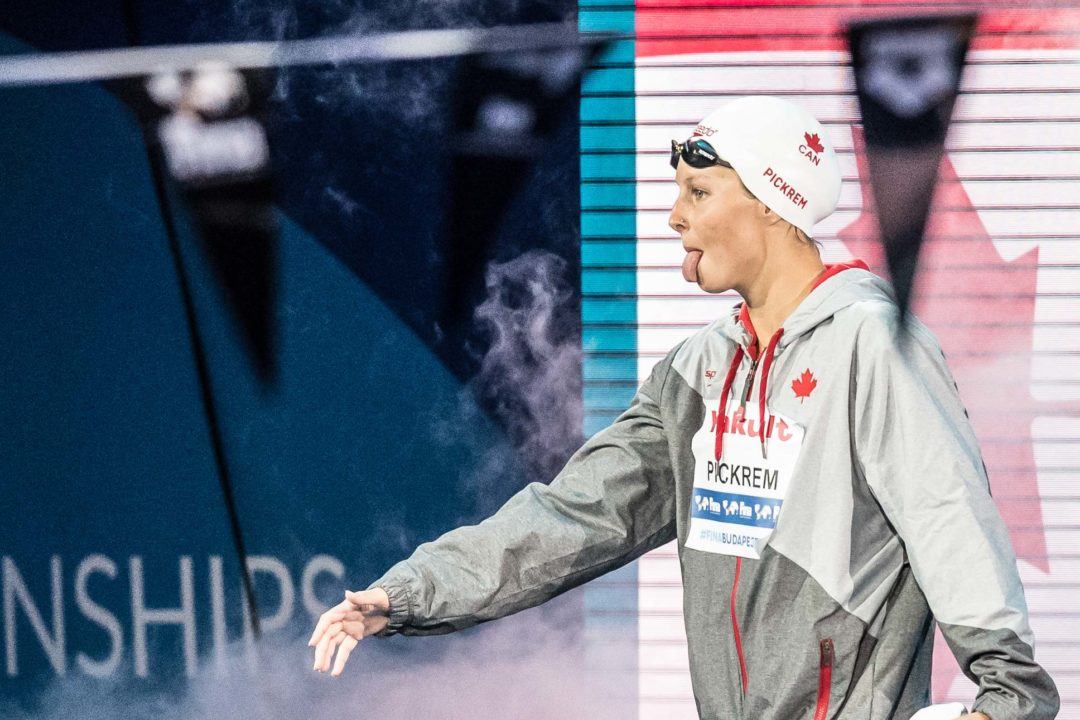 Sydney Pickrem rebounded with a 400 IM bronze after being forced to stop during the 200 IM final. Current photo via Mike Lewis/Ola Vista Photography

Sydney Pickrem had set herself up perfectly for her first World Championship medal. In the semi-finals of the women’s 200 IM, the Canadian broke her own national record in a time of 2:09.17, advancing into the final in 3rd place.

In the first length of the final Pickrem visibly sat in 8th place, but it wasn’t much of a surprise given she was 8th fastest out of the finalists on the fly leg in the semis. However, once hitting the 50 wall, she stopped swimming, failing to finish the race. Her semi-final time would’ve won bronze had she been able to recreate it.

After the race it was reported that Pickrem swallowed water prior to the turn, and was unable to continue. No doubt a difficult set back for the 20-year-old, she took to Instagram afterwards and vowed to come back stronger in the 400 IM.

Accidents happen and some times, things are just out of your control. Moments like yesterday really test your strength. You have to separate the successes from the failures and focus on moving forward. As disappointed as I am, I’m more motivated to come back stronger, and make Canada proud! 5 days to gear up & get ready to race again. Can’t wait to see what Canada has in store for the rest of this meet! Go Canada Go!

Pickrem did just that, advancing through to the finals 4th in 4:36.25, less than a second off her best time.

In the final, she steadily made her way through the field, moving up from 6th at the halfway mark to 2nd at the 300m wall with the fastest breaststroke split in the field, 1:16.17.

Pickrem battled with Spain’s Mireia Belmonte for the silver behind Hungary’s Katinka Hosszu. Belmonte pulled ahead on the freestyle leg to win silver, with Pickrem picking up the bronze in a very impressive bounce back swim. Hosszu won gold for the third straight time, much to the delight of the hometown crowd.

Coming into the meet her best time stood at 4:35.43, set at the Canadian Trials in April. She got all the way down to 4:32.88 to win the bronze medal, narrowly missing Emily Overholt‘s Canadian record of 4:32.52, set at the last World Championships when she also won bronze.

Pickrem adds her first World Championship medal to her international tally which includes silver and bronze at the 2015 Pan American Games in the 400 and 200 IM, along with a bronze from the 2013 World Junior Championships in the 200.

The Americans added four gold and seven total medals during the final session of the meet that included eight finals. They dominate the medal table, with 18 golds toppling over the next highest (GBR – 4). For total medals, Russia, China and Australia each got ten to their 38.

This is a massive 180 from where the Americans were in Kazan, winning ten more gold medals and 15 more medals total than they did just two years ago.

The Canadians finish with the same total as two years ago, 4, but improve with 1 gold and 3 bronze as opposed to 4 bronzes last time. Their official finish is 11th on the medal table, up from 20th.

Can we not forget the fact that she got out of the final at the second largest meet in our sport because she choked on water?

Move on…. she caught water, didn’t let it ruin her meet and came back with a PB. That’s what shouldn’t be forgotten!

She took up a spot in a World Championship final, a spot someone else could have taken, and got out after choking on water. I wouldn’t necessarily say her meet was a success either. #notsummerleague #neverforget

Well I forgot when I got distracted by that heavy bronze glimmering around her neck, in her 2nd best event where she wasn’t amongst the top 3 coming in, was 12th last year at the Olympics, produced the 2nd fastest time in CAN history, is only 20yrs old with hopefully a long career ahead of her. I guarantee she won’t forget what happened oin the 2IM. Lets give this young budding CAN superstar some support instead of ‘poo pooing’ a weird mishap that will likely never occur again (stuff happens in sport occasionally)…