Akron Wins 13 of 16 Events Against Ohio in MAC Dual 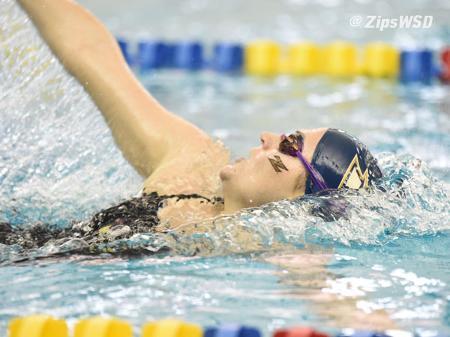 Paulina Nogaj went a season best time on the 200 free, as well as won the 100 fly and 200 IM. Archive photo via GoZips.com

The Huskies came away with 10 victories on the day to push them over the edge.

The Mean Green won all but three events and the team set seven new meet records along the way at the invite hosted by Oklahoma Christian.

Paloma Marrero took the breaststrokes by huge margins, posting some of her fastest times this season. In the 100 breast, Marrero, who leads the MAC in that event, posted a 1:02.44, which was her 2nd fastest time in a dual meet this season, only behind her 1:02.41 from the Ohio State/Denison double dual. In the 200, Marrero went 2:14.29, whcih was her fastest time in a dual meet this year, and would rank her as 2nd in the 200 breast in the MAC this year if her season best of 2:08.51 weren’t already leading the conference. Marrero leads MAC by 5 seconds in the 200 breast, and is 9th in the NCAA this season.

Ohio’s Corrin Van Lanen won the 50 and 100 free, posting her 2nd fastest dual meet time this season in both. Her 23.18 in the 50 was good to win the event by half a second, and was only .03 seconds slower than her season best time in a dual meet. Her overall season best time is 22.71 from Winter Nationals. In the 100, Van Lanen won by 3 tenths of a second over Akron’s Morgan Waggoner, 51.65 to 51.96. That time is also her 2nd fastest time in a dual meet this season, but is still half a second slower than her dual meet best, 51.03.

AKRON, Ohio- The Akron swimming and diving team won their third- straight head-to-head dual meet against Ohio with a 193-106 victory on senior night on Saturday at the Ocasek Natatorium.

The evening started with the Zips taking the top-two spots in the 200 medley relay as the team of sophomore Ellie Nebraska (Columbus, Ohio), senior Paloma Marrero Munoz (Merida, Spain), freshman Paulina Nogaj(Radom, Poland), and Franz won the event with a time of 1:43.64.

The Zips continued their fast-paced swimming in the 100 backstroke. Nebraska earned her first individual event win of the day with a 57.61 time. Nebraska also took the 200 backstroke and clocked in at a time of 2:03.54. Senior Mackenzie Vargas (Roseville, Cali.) won the 200 butterfly with a time of 2:02.

On the boards, Akron’s diving took both the one-meter and three-meter events. In the one-meter, junior Karly Crail (Edgewood, Ky.) took the top spot with 265.65, followed by freshman Andrea Bugariu (Troy, Mich.) with 228.75. Crail won the three-meter event with a total score of 270.15 which added nine points to the Zips’ total.

The Zips are back on the road next weekend as they travel to the University of Notre Dame for the Shamrock Invite at the Rolfs Aquatic Center.  Action begins Friday, Jan. 26 with prelims at 10 a.m., followed by finals at 5 p.m. The invitational wraps up on Saturday, Jan. 27 with competition beginning at 11 a.m.

AKRON, Ohio – The Ohio swimming and diving team wrapped up a weekend dual against reigning Mid-American Conference Champions, Akron, on Saturday (Jan. 20) where the Bobcats fell to the Zips 193-106. The Bobcats recorded four first-place finishes throughout the meet.

“This was a tough meet for our ladies after not competing since November, but I thought they did a great job,” said head coach, Rachel Komisarz-Baugh. “We had some close races that just didn’t go our way. The result isn’t what we were looking for but we will learn from this and move on to be better next week and for MACs.”

Diving Events
The Bobcat divers kicked off the diving events in the 1-meter dive where junior Nicole Hughes (Cleveland, Ohio) placed fourth with a score of 215.02 just ahead of sophomore Ryleigh Tuck-Macalla (Bay Village, Ohio) in fifth with a score of 200.92.

In the final diving event of the afternoon, the three-meter dive, Hughes and Tuck-Macalla placed third and fourth with scores of 244.13 and 202.88.

In the 1000-yard freestyle, Ohio secured another second-place finish from freshman Hannah Schlegel (Birdsboro, Pa.) posting a time of 10:14.79.

In the 200-yard free, Zimcosky finished first for the ‘Cats taking second and clocking in at 1:51.39.

Sophomore Annie Gosselin (Naperville, Ill.) recorded a fourth-place finish in the 200-yard backstroke after posting a time of 2:06.67.

In the 200-yard breaststroke, Lahtinen was the first Bobcat to touch the wall taking third place with a time of 2:21.39.

Zimcosky added another win in the 500-yard freestyle after recording a time of 5:02.09.

Van Lanen placed second in the 100-yard butterfly with a final time of 55.01.

The final event of the day was the 400-yard freestyle relay where the Bobcat team of Mikesell, Henderson, White, and Hornstra placed second with a time of 3:36.61.

UP NEXT
The Bobcats will compete again next weekend where they host back-to-back duals against Marshall (Jan. 26) and Bowling Green (Jan. 27). Friday’s meet is scheduled to begin at 5 p.m. while Saturday’s meet will begin at 2 p.m. and will serve as Bobcat Senior Day.