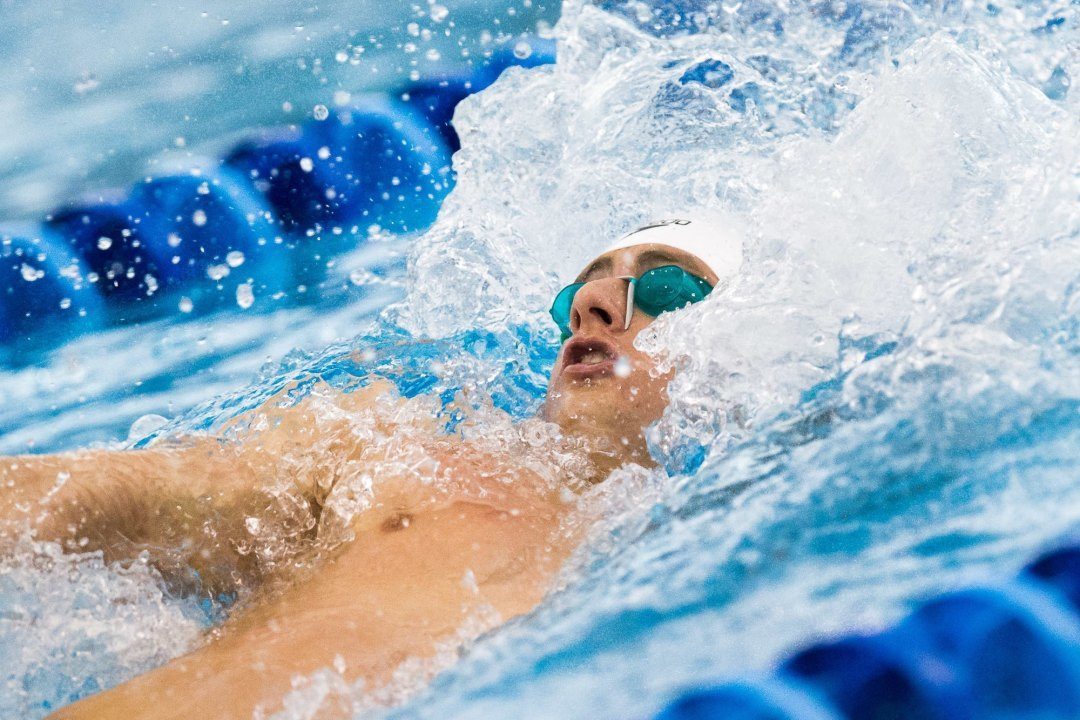 The Aggies are now undefeated on both the men's and women's side, as they beat Incarnate Word and Miami (FL) on Friday in College Station. Archive photo via Tim Binning/TheSwimPictures.com

Surprisingly, in the midst of the Texas A&M win, the Aggies only had one double winner on the day in the form of junior Sarah Gibson.  Gibson won the 200 freestyle in a time of 1:49.19 and followed that up with a 500 freestyle victory in a time of 4:53.85.

The Aggies’ star Beryl Gastaldello was held to just two individual events with one of those being an exhibition 200 backstroke and the other being the 50 freestyle, an event she won in a time of 22.84, now the NCAA’s 10th fastest of 2015. In her absence, Miami’s weapon, Angela Algee, took charge of both butterfly events. Algee registered a winning time of 2:02.16 in the 200 and a to-the-wall-first time of 54.85 in the 100, highlighting the Aggies’ need for depth in the event.  With Gastaldello absent, the highest 100 fly finisher for the 12th man was Laura Norman’s 56.21.

The Aggie women were able to step it up, however, in the 100 breaststroke race, where Sycerika McMahon topped the field in a winning time of 1:01.48.  She was followed by teammate Jorie Caneta who touched in 1:02.70 to give Texas A & M a 1-2 finish.  That bodes well for the Aggies, seeing how their top breaststroker, Ashley McGregor is delaying her senior season in favor of training solely for the Olympics.

Colleen Konetzke and Caitlynn Moon formed another pair of Aggies who packed a 1-2 punch, touching first and second in the 1000 freestyle.  Konetzke’s time of 16:58.72 logged the only sub-17-minute swim of the morning, while Moon scored a mark of 17:14.02.

Lisa Bratton nabbed an NCAA top 20 time in the 100 backstroke with her time of 54.44 and was followed by Miami’s Christina Leander, a former NCAA qualifier who transferred from Tennessee, who clocked a time of 55.93. Leander also logged a runner-up result in the 200 backstroke, touching in 2:02.27 to Aggie Claire Brandt’s 1:58.36.

An off-the-record battle ensued between two Aggies, Bethany Galat and Meredith Oliver, both of whom exhibitioned the 200 IM event.  Galat ultimately snagged the in a time of 2:03.23, while Oliver finished in 2:03.91. Relatively even after butterfly portion, Galat made her move during the breaststroke leg, out-splitting Oliver 35.11 to 36.93.

With their win today, the Aggie men improve their record to 2-0 on their young season, but it’s been several years since the squad from College Station has looked this good this early.  Winning 15 of the 16 events on the day’s meet, four Aggies would end up winning 2 individual events over the course of the competition.

Of note, Miami and Texas A & M house two of the top diving squads in the nation and it showed in yesterday’s scoring.  Sam Thornton scored 375.20 in the men’s 1 meter for the win, while Carolyn Chaney from Miami registered the win for the women in 311.80.  The 3 meter for women was won by Aggie Madison Hudkins in 362.35, while the men’s 3 meter also saw an Aggie win, with Tyler Henschel finishing in a remarkable 386.50.