After Relay “A” Cut on Friday, Auburn’s Logan Tirheimer Goes Best Time in 100 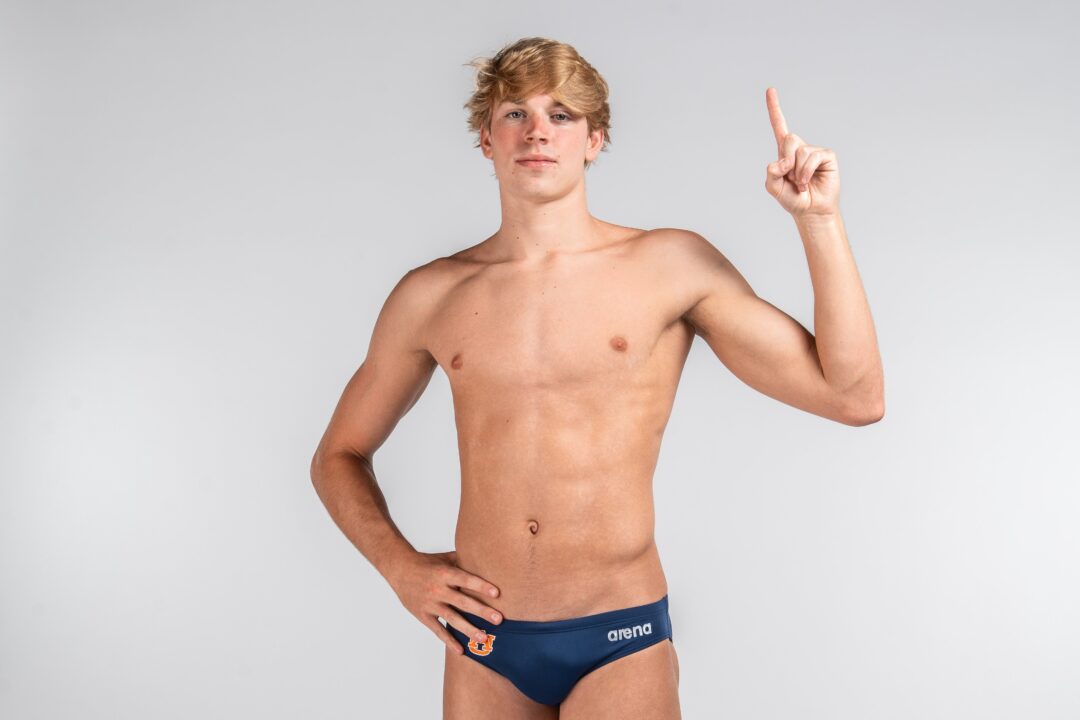 Tirheimer, who is the top 50/100 freestyle swimmer for Auburn this year, is going into conference championships with 3 individual NCAA "B" cuts. Current photo via Auburn Athletics

After Auburn scored an NCAA “A” cut in the men’s 200 yard freestyle relay on day one, they rode off their high and proceeded to win seven out of the twelve events contested on day two the Auburn Invite. This puts them in good shape for conference championships, which happen in about two weeks.

Logan Tirheimer, who was part of the aforementioned 200 free relay, swam a personal best of 43.12 to win the 100 free. His previous best time was a 43.32 set at the mid-season invite, and he is almost eight-tenths faster than the 43.99 that placed him 16th at SECs last year. His time today, in contrast, would have finished 7th at SECs last year.

Danish swimmer Mikkel Gadgaard, who swam the 200/500 freestyle at NCAAs last year, had a shot at the 100 breaststroke in a time trial. He swum a 53.64, which is a personal best for him. This is second time swimming the event, going a 54.36 at the mid-season invite this year. Despite his seemingly lack of experience in the event, his time today would have put him in scoring position at SECs last year.

Mykenzie Leehy, who transferred from Houston this fall, kicked things off for the Auburn women and won the 100 free in a season-best time of 48.86. Her time is only 0.06 seconds off her finals time of 48.8 at NCAAs last year, in which she placed 16th.

Russian swimmer Anastasia Makarova backed up her 100 breast win on day one to win the 200 breast in a personal best time of 2:11.47. Her time was also 10th-fastest time in Auburn history in the event. Makarova, who arrived at Auburn mid-season, is the first woman from Auburn to under the one-minute mark in the 100 breast since the 2017-18 season and looks to be the Tigers’ primary breaststroker.

The Auburn men and women finished 8th and 9th respectively at SECs last year, and look to improve upon those results under new head coach Ryan Wochomurka this year. The Southeastern Conference championships will be held from Feburary 15 to 19 this year for both men and women.

He is so fine

Didn’t Nate Stoffle lead off the relay with a 19.6?

Maybe. The touchpads went haywire in that relay, so it’s unclear if Stoffle’s time is legit or will be accepted.

Did him swim dat 43 in jammer?

He has the 14th fastest time in the 200, and is the fourth fastest performer.

1
0
Reply
The Weez
Reply to  PVSFree

One would think…but then go look at those teams, closely. I had a few friends and club Teammates on those late 90’s / early 2000 AU teams (men’s teams in particular). They are, almost without fail, exclusively sprint based. 50’s, 100’s.

It’s my recollection that those Marsh teams didn’t really care about the 200’s on up. When recruiting, if the person wasn’t a pure sprinter (keep in mind too, that at that time, there weren’t too many who would final in both the 100 and 200 of a given stroke), they wouldn’t really be recruited.

You can still see this phenomenon in today’s college swimming. Think Conger, Townley, etc. at Texas…great 200 / 500 swimmers out of HS, but… Read more »