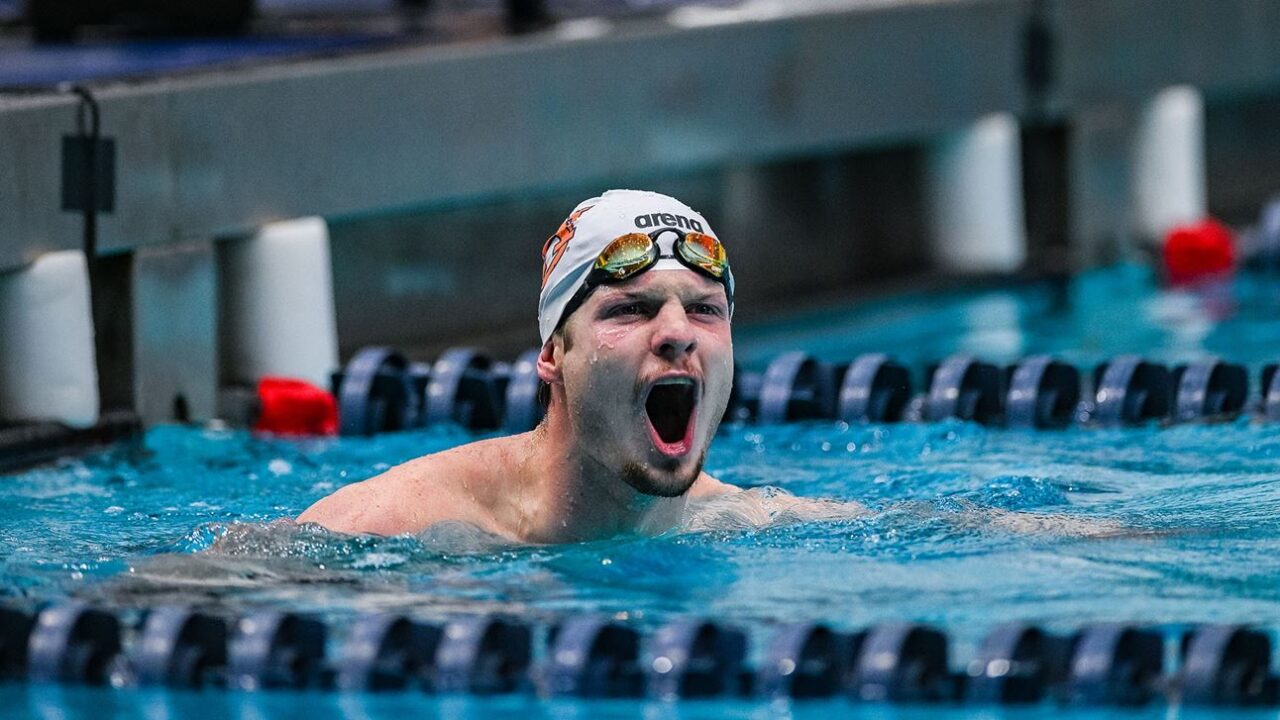 The Auburn men and women scored no points at last year's NCAA Championship meet, but earned themselves a lot of opportunities to change that on Friday. Current photo via Grayson Belanger/Auburn Athletics

A year ago, the Auburn Tigers sent two individual men to the 2021 NCAA Championships, who scored no points, and no relays.

But first year head coach Ryan Wochomurka is sharing the very large ship in a hurry on The Plains, and on Friday, the Tigers locked in a men’s relay qualification for the 2022 championships, which is a significant turnaround from last season.

The Auburn relay of Nate Stoffle, Aidan Stoffle, Logan Tirheimer, and Matthew Yish combined for a 1:16.82 in the 200 yard free relay.

While a touchpad error means that we don’t know the middle two splits of the relay, it appears that Nate Stoffle opened in 19.67, Aidan Stoffle and Tirheimer combined for a 38.14 on the middle two legs, and Yish anchored in 19.01.

Last year, Auburn’s season-best in the 200 free relay was 1:18.55, which ranked them 8th among 10 SEC teams. Their time from Friday ranks them 2nd behind only the 9-time defending conference champion Florida Gators.

Wochomurka was a member of the Auburn team in the 2000s, when the program was built around a dominant core of sprinters. His hiring brought with it not only the pressure to rebuild the program as a whole, but especially to rebuild the sprint group, and early returns are a positive sign.

By comparison, three of those four swimmers (Yish, Tirheimer, and Aidan Stoffle) were on the team’s best 200 free relay last year, combining with the freshman Nate Stoffle now for a much faster result.

The Tigers already had an “A” standard in the 200 medley relay from the mid-season invite, but previously did not even have a “B” standard in the 200 free relay. Because of their “A” standards, they’re now able to enter at NCAAs all relays where they have at least “B” standards (Provisional Standards). That means they are now eligible to swim four of five relays, with the exception being the 800 free relay.

Auburn opened the evening with this time trial swim, and they swam a different foursome in the scored portion of the event, and they still managed to beat Florida State, showing off some depth.

The meet included contingents from Alabama, Florida, Florida State, and Emory with different levels of participation.

The women’s 200 medley relay of Florida State likewise locked up an NCAA Championship invite with a Qualifying Standard time of 1:36.37 on Friday. That sneaks under the standard of 1:36.40. They now sit .01 seconds behind Louisville as the 4th-best relay in the conference so far this season.

The team of Tania Quaglieri, Nina Kucheran, Jenny Halden, and Rebecca Moynihan knocked .63 seconds off their previous season-best time, which happened to be last weekend against Tampa. They were just 1:37.43 at their mid-season Invite.

The Seminoles have been as hard-hit as anybody by COVID and flu cancellations this season, but they’re now locked in to a spot at NCAAs. So far, they don’t have any other Provisional Standards, but they’re likely to claim at least one more relay spot before the NCAA qualifying deadline.

My family is so happy for the Auburn Tigers to have Coach Ryan there on the pool deck. We are cheering for the Tigers except when facing Florida. His work with our swimmers here at the University of Houston was a pleasure to behold because you knew his goal was to help those ladies to pursue their very best in swimming, academics and life. We are forever grateful for the four years our daughter swam for with Coach Ryan and for his impact on local swimming in our Houston area. Duty, honor and integrity while striving for the highest standards in swimming while caring for his athletes were his trademark signature and I know those are his principles anywhere coaching… Read more »

The WOCHO Madness is pushin’ 🅿️

That caption 🤯
How is it possible that a program can go from winning back to back titles (for both men and women) to scoring 0 points at NCAAs in 15 years?

Brett built the anti-culture. Gary just finished the journey. Auburn women were 16th and men were 12th in the season before Brett “resigned.”

He could at least recruit enough sprinters from the 2000s legacy to keep the team afloat, even if he wasn’t really doing a great job as a coach, I guess.

Gary & his staff inherited a dumpster fire, and worked hard for three years to build it back. I’m not denying that last year was awful results wise, but Gary left that program in way better shape than he found it…

Not fair, and not true. Look to your own alumni (swimmers & coaches) if you want a scapegoat.

just like any other program that has won, times change people change, something that worked is not working like before…. Maybe bagmen left and it was harder to recruit…. who knows, all programs have up and downs

I would love to see how the new coach managed to turn the team around so fast! Have been a little concerned about how fast they’ve swam in season but we’ll see if they can keep it up come SEC and NCAAs

No knock to the current staff, but this year was going to better regardless. Taylor and his staff told the Auburn swim alumni this a year ago.

The wocho era has begun😳

oh the preseason hype still living strong in you, young one, learn you will….

All the way to 6th place at SECs!