What Will It Take to Qualify for the 2022 NCAA Division I Championships? 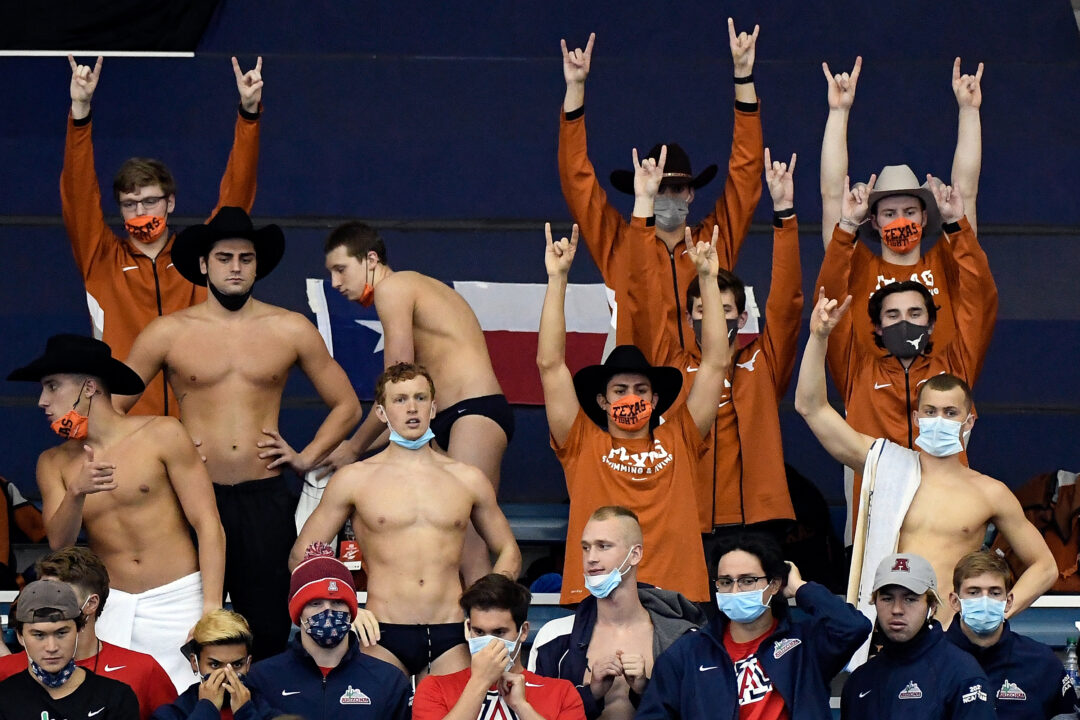 The University of Texas Longhorns (above) qualified 18 athletes for the NCAA Championships and won their 15th NCAA Team Title in Greensboro. Stock photo via Photo by Mike Comer/NCAA Photos via Getty Images

The NCAA allows 235 spots (men) and 281 spots (women) for individual events at the NCAA Division 1 Swimming & Diving Championships. These numbers don’t include relay-only athletes. In addition to this rule, each team’s roster is capped at 18 athletes, which includes both swimmers and divers. If a team qualifies more than 18 athletes, they will have to cut athletes in order to meet that rule.

In individual races, all swimmers that achieve an NCAA “A” Cut will automatically qualify for the NCAA Championships. Once all athletes with “A” times have been entered, the NCAA can invite swimmers who have an NCAA “B” Cut, which is used for consideration. These athletes are chosen until the meet fills.

Of note, several of the events got “slower” invite times than previous seasons, which is very unusual. One reason for this could be due to the COVID-19 restrictions that made it challenging for athletes to train. There were also several athletes that took a redshirt or deferred their enrollment to their universities for the Olympics.

We expect to see athletes return from major universities that redshirted the 2020-2021 NCAA Season. The Ivy League and Arizona State University didn’t compete in any NCAA meets during the season due to COVID-19 concerns. We expect that the NCAA Championship Division 1 invite times will lower next season as these athletes return, not to mention that there are at least 20 NCAA-qualifying caliber athletes from each gender that are expected to take advantage of their 5th year of NCAA eligibility.

Below are the Top 10 Teams with the most individual swimmers qualified for the 2021 NCAA Division 1 Swimming & Diving Championships.

*Not all qualified athletes competed at the NCAA Championships due to the 18-athlete roster rule that applies to individual swimmers, divers, and relay athletes.

With the incoming freshmen class and all the fifth years, this year’s season will be nuts!

Dont forget we will probably see some mid-year international additions who can have impact! Oh yea it will be epic

Great overview – getting pumped already for the MEN’S NCAA GREATEST SWIMMING MEET in the world! People ask “When will the swimmers be unable to swim any faster?” Answer: We will find ways to continue to drop records for as long as we swim! The human spirit triumphs!