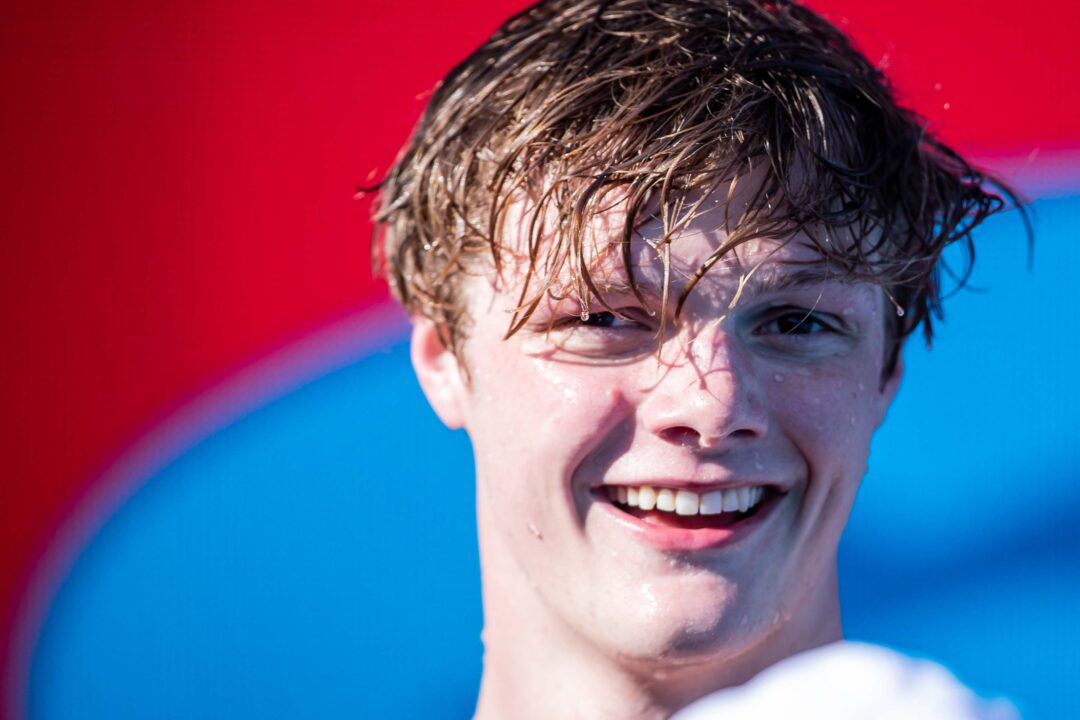 A day before the defending college football national champion Georgia Bulldogs beat the Florida Gators in Jacksonville, the two teams squared off in the renewal of their annual dual meet in Athens. There, the Florida women rolled through the Bulldogs by almost 50 points, while the Georgia men pulled off an upset of the #2 Florida men 156-144.

While Florida dominates the all-time series on the men’s side (61-20-3), Georgia has won two of the teams’ last three matchups. The women’s series now stands at 16 Florida wins and 20 Georgia wins all-time.

The Florida men were without Josh Liendo, who was back home in Toronto competing at the FINA World Cup Series meet.

The meet opened inauspiciously for the Bulldogs. After Florida owned the diving portion of the meet on Thursday in Gainesville, the Bulldogs opened the swimming events on Friday with a disqualification in the 400 medley relay.

Georgia’s “A” relay touched first in 3:10.37, but butterfly Wesley Ng left early (-.09) seconds, which tipped Florida into a 1-2 finish. The Gators’ “A” relay finished in 3:10.53, and had the fastest splits on the last three legs of the race. Luca Urlando, the fastest swimmer in history in the 100 yard backstroke, gave Georgia an early lead with a 46.50 leadoff leg.

Georgia star swimmer Jake Magahey, healthy again after dealing with some injury last season, clawed the Bulldogs back into the meet in the first two individual races, though. First, he won the 1000 free in 9:01.35. That’s his season-best by 14 seconds. He finished first, with Tommy-Lee Cambalong backing him up by finishing 2nd in 9:05.60 – also easily his best time of the season. That’s Cambalong’s personal-best time that wasn’t a split en route to a tapered 1650 free.

They both held off a furious closing kick from Open Water National Champion Brennan Gravley of Florida, who touched just .09 seconds behind Cambalong after closing a full second in the last 50.

Magahey later added a 3rd individual win by leading the 500 free in 4:18.59. He ended his day with a 19.81 split on the closing 200 free relay. That split was .04 seconds faster than the Bulldogs’ worst split on the “A” relay, a gap that would’ve changed a Florida win in that relay into a tie.

Georgia kept their early-meet roll going with a win in the 100 back by Ian Grum in 47.16. Both teams’ best 100 backstrokers didn’t swim the event: Adam Chaney for Florida and Luca Urlando for Georgia; but Grum’s winning time was actually faster than Florida’s Chaney swam on the leadoff leg of Florida’s 400 medley relay.

The 100 backstroke is a weakness for an otherwise deep Florida team. That was exposed by the fact that without Chaney in the event, Georgia took the top four spots on Friday.

Florida struck back in the 100 breaststroke when Lithuanian freshman Aleksas Savickas won in 53.78. That’s the fastest time by a freshman in the NCAA so far this season.

Out of the first dive break, Florida’s Julian Smith got one back for the Gators, winning the 100 free in 43.65. Smith is one of the interesting stories for Florida this season: he was primarily a breaststroker to this point of his college career, but is making a big shift to freestyle races this season.

Savickas gave the Gators back-to-back wins to put Florida back out in front, but the Georgia men won the last three individual events of the day (Magahey’s 500 free, Urlando in another season-best 46.19 in the 100 fly, and Grum grabbing another win in the 400 IM in 3:49.26).

That put the meet out-of-reach headed into the final race, though the Gators got the final strike in with a winning 1:18.83 in the 200 free relay. That included a 19.33 anchor split from Macguire McDuff.

Besides Liendo, Florida was also without Kevin Vargas, who won the US National Champion in the 400 IM in long course over the summer.

If one were to focus solely on the wins, then the women’s meet felt a lot closer than the final score indicated. In fact, the Georgia women won the first five events of the swimming portion of the competition – sometimes by wide margins.

In the opening 400 medley relay, for example, Georgia clocked a 3:35.80, with Florida placing 2nd in 3:38.49. Georgia’s relay included a season-best of 53.09 from Marie Schobel on the backstroke leg and a huge anchor leg of 48.74 from Eboni McCarty – which is almost a second faster than her flat-start lifetime best.

A 2-3-4 finish almost negates a win in a college dual meet: when Florida goes 2-3-4, that means Georgia only gets a +1 scoring margin.

That meant that Florida remained in striking distance, and in the women’s 200 fly, they began to make their move.

The wins by the Gators, but also the 1-2 finishes, started to add up.

After Georgia dominated in the opening relay, the Florida women won the closing 200 free relay, finishing in 1:30.24, thanks in part to a 21.96 rolling-start split from Mack. That time ranks them 7th in the NCAA so far this season.

Both teams have some very good swimmers at the top end of their roster, but Florida’s team depth is what made a meet that felt close into 47-point victory on Friday. That included the diving portion of the meet, where Florida won both events and went 1-2 on 1-meter.

Georgia is off until they host the Georgia Invitational on November 17. Florida has another big SEC matchup next weekend when they host Tennessee.

Magahey pulling that 1000/200 free double with only the women’s 200 between them is impressive without even considering he threw in the 500 too.

Big omission in article: Josh Liendo was at World Cup and missed the meet.

It’s literally mentioned in the article. Thrice. Including in the excerpt, the very first sentence of the entire thing.

I did say in power rankings that people were jumping the gun on Texas.

Florida is unproven, and the fact that a freshman who’s never swam yards is the face of their team is not ideal imo. I’d go as far as saying that without Liendo, they lack identi

All credit to UGA though, they have absolute studs that can potentially see them jumping Stanford into the top 7 at NCs.

Florida is unproven? They’ve been perennially in the Top 3 at NCs, their sprint relays have become supercharged in the past few years, and they swept the men’s freestyle events at the Olympic Trials (and World Trials this year) and nearly at the Olympic Games as well. Their identity is now the University of Freestyle. From the 50 to open water, they’re unbeaten in the US.

Liendo wasn’t the only big absence. 400 IM National Champion Kevin Vargas was also missing, and even though they swept the boards anyway, UF’s top two male divers (Garcia, Svirskyi) have yet to compete this year.

Florida leeches off the Dressel era too much. In losing Finke and Smith, their identity is a few great freestylers. Wouldn’t be surprised if NC state jumps them. Yes, their sprint relays are insane, but what happens if Liendo doesn’t work out? Liendo is the most hyped recruit since Daddy Seliskar or Hoffer.

I mean I guess dual meets don’t matter? But at the same time, they do, and are heavily indicative of a teams form (unless it’s Cal who only swims fast at NCs). Losing to a Sate-less UGA team is not a good look and I can’t imagine Nesty is thrilled

Yeah. And neither Seliskar nor Hoffer worked out at Cal. Great examples to really bring credibility to your point.

That’s not even my point. My point is that Liendo has as much hype around him as Seli or Hoffer and it could potentially backfire if he doesn’t hit these absurd times that everyone is expecting. There is real pressure for him to perform at an NCAA level.
Even if he goes 18 something, 41 high and 43 high in 50/100 free and 1 fly, Texas is still leaps and bounds ahead of Florida come time for NCs

Liendo has already gone 19.2 in an October dual meet UNSUITED. He’s already “working out” – even a mediocre NCAAs would put him in multiple A-finals

None of the swimmers that swam with Dressel are on the college team now, so I’m not sure how exactly UF “leeches” off the Dressel era, especially considering they’re winning more relays now.

Eric Friese has one of the fastest fly splits in history.
Kevin Vargas finaled in four events at Summer Nationals and won the 400 IM.
Brennan Gravley is the top overall male open water swimmer in the US.
Adam Chaney has been top 3 at NCAAs in the 100 back.
Dillon Hillis was a runner-up at NCs in the 100 breast.
UF isn’t JUST a great freestyle team. They just have lots of great freestylers.

Also, since dual meets matter to you,… Read more »

Most multi time World Champ finalists struggle when they get to college. False, they do not. Liendo was a stud before college, and will mroe than likely be phenomenal in college.

Yeah that killed me logically to