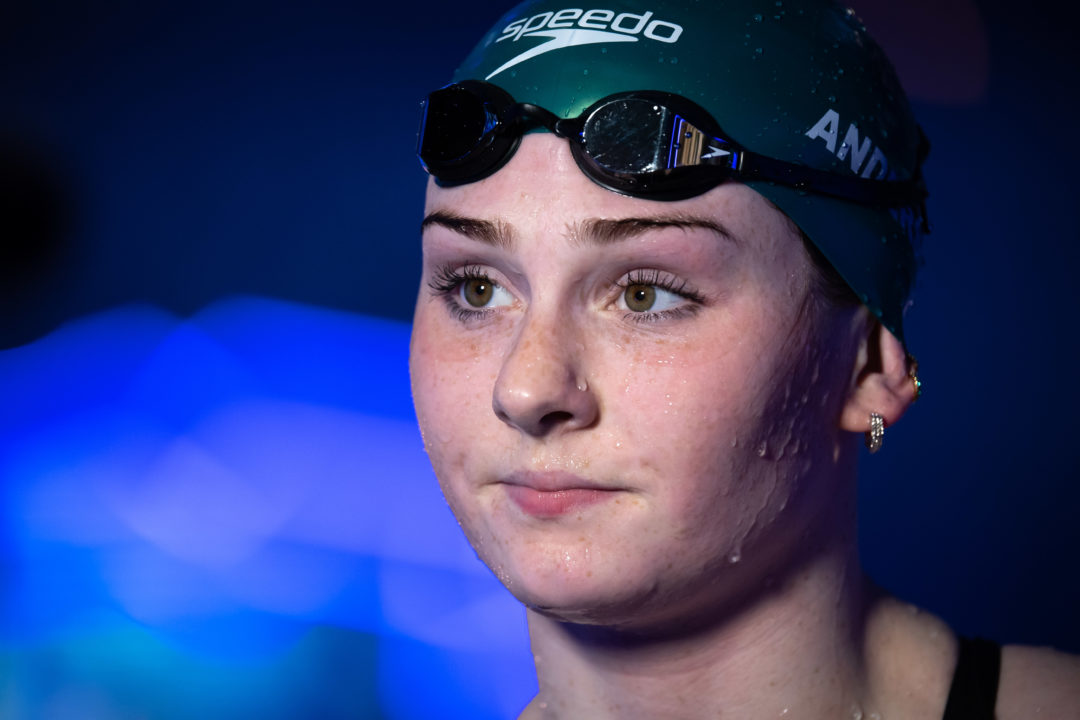 85 English swimmers have been named to the first-ever England Swimming Team, giving a glimpse into the type of talent that may represent the nation in 2022. Archive photo via Mike Lewis/Ola Vista Photography

Huske discussed started to use sox, parachutes, and racks in her training, which she said she enjoyed but did make her a bit sore heading into the meet.

Last week Swim England announced that an enlarged national squad would be supported with an eye towards the Birmingham 2022 Commonwealth Games. Just today, a roster of 85 English swimmers have been revealed as the first-ever England Swimming Team, giving a glimpse into the type of talent that may represent the nation at the home-based Games.

As we reported, English elite swimmers such Adam Peaty and Freya Anderson are included in the squad for the first time. These World Class Pathway (WCP) athletes will still be managed by British Swimming but will be involved in England Swimming Team camps in the run-up to the Commonwealth Games. Training camps are also part of the squad’s package.

Based on performances pointing to medal potential in Birmingham, as well as podium prospects for further down the road in Paris 2024, the England Swimming Team’s composition includes a spectrum of age, talent and promise. Swim England says the enlarged squad’s aim is to cultivate an England Swimming Team identity ahead of what promises to be an ‘exhilarating experience’ of a home Games.

Grant Robins, Swim England Head of Talent, said of today’s announcement,“We’d like to offer our congratulations to everyone who has been named in the first England Swimming Team – we hope it will lead to a real team unity that will deliver the best games ever.

“Obviously there is still some time until the Commonwealth Games and there will be a selection policy that gives a period for performances once we are back in the pool for swimmers to demonstrate their potential.”

Isabella Hindley is where on this list? Top 3 GB 50 Free and top 4 100 free. Guess this is how you get treated when you choose to balance academics and swimming in the NCAA instead of dropping out of school and hanging out in Loughborough.

It is easy to pick out names not on the list but i will say i do agree with this, especially after coming out of an ISL season with Iron where she swam decently.
With Hopkin, Anderson and O’Connor it does seem odd to leave out a 100 Freestlyer but i guess Wood and Van Selm would be around her times, if not faster judging by Wood in the ISL.

I would also say that Emily Crane is also not on the list and has PBd the same time as Hindley last year. Think she has moved into the NCAA this year aswell so may do a hopkin and greatly improve soon

That’s a bit harsh I’d say. Not all of those swimmers “have dropped out of school and are hanging out in Loughborough”. Some are still at school and others are at other Unis very much balancing academics and swimming. I’d also imagine that anyone not on the list comes out and produces a swim at trials that is better than others, then they would be picked. I don’t think it’s said that anyone not on the list will not be picked.

Where is Matt Richards? Am I just missing him or is he actually not on the list?

Oh that makes sense.
Thanks

So does this mean that only these swimmers can qualify for the commies? Or are other swimmers allowed to try and get the times and what happens if someone beats one of these swimmers and qualifies instead of them, heaven forbid!!! what would British Swimming/Swim England say to that!!!