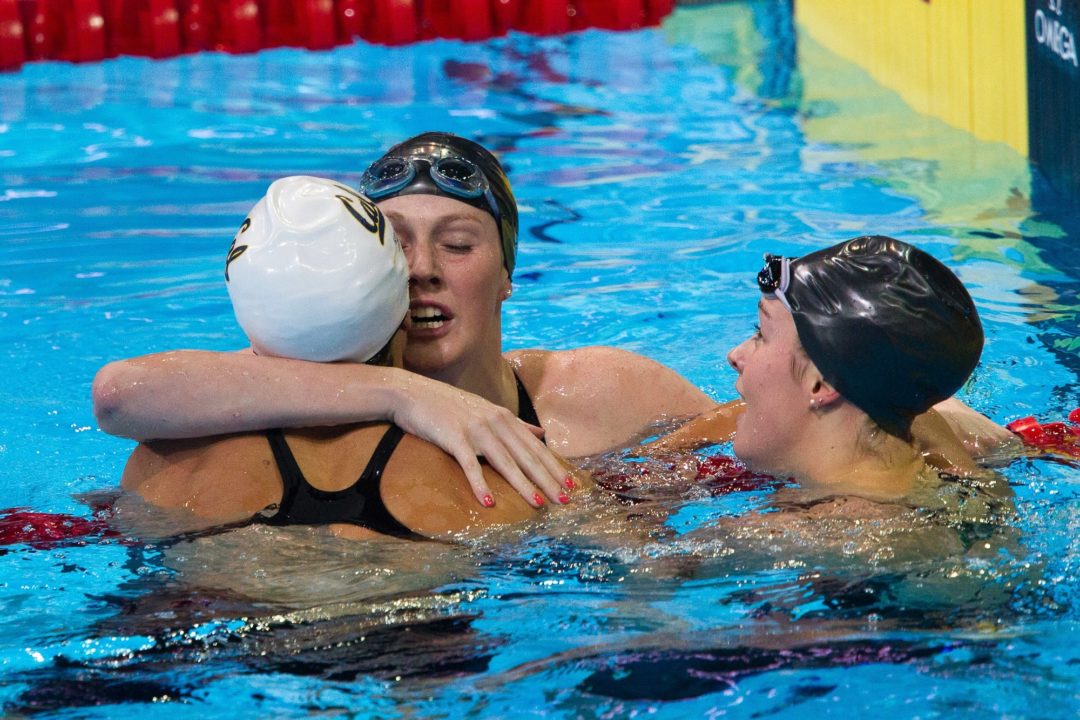 Do you ever get sick of swimming, just over it–chlorine-saturated and water-logged to the point you don’t even want to...

Arkansas Governor Asa Hutchinson announced that youth sports, including swimming, can return in the state beginning June 1, with safety restrictions in place.

Do you ever get sick of swimming, just over it–chlorine-saturated and water-logged to the point you don’t even want to hear the word swim?

That was me,  last Sunday in New York City, the night before the 2014 Golden Goggles.  I was scheduled to attend the NYC premiere of the documentary film Touch The Wall, starring Missy Franklin, her parents, Kara Lynn Joyce, Todd Schmitz, and David Marsh, and I simply could not muster any excitement.

Walking into the theater, I was thinking, “I don’t want to sit through a two hour film about swimming…  Then I started coaching myself. “Stop it. Smile. You’re with friends and swimming family. Be respectful. No one cares if you’re in a swimming-funk.”

In other words, the emotional swimming-well was dry…or so I thought.

Here are the five reasons why you will cry watching this film.

ONE – The First Five Minutes

The first five minutes hook you. They grab your heart-strings, pulling them tighter than you can possibly imagine, then let them go in a way that makes the water-works gush.  Call it filmmaking voodoo, but the momentum starts building around the three minute mark in a rush of swim-atmosphere and rapid-fire plot points. As a swimmer or just a sports fan, you’re absorbing tastes of what the film has to offer. You get caught up in it, until the final shot,  Missy Franklin, from the bottom of the pool, swimming to wall, and you realize it’s the ONE-SHEET (aka poster of the film). Missy touches the wall, and the title of the  film comes up… I’m crying right now thinking about it.  It’s difficult to explain, but sitting there in the theater I found myself thanking Grant Barbeito and Cristo Brock, the filmmakers.  They did it, I thought. They captured the essence of what it means to be a swimmer, and why we all love it.

After the first five minutes, the film settles into story, setting up Missy as a kid with braces, and her parents.  If you’re a swim-parent, this is going to get you…in your heart or your throat. The Franklins courageously allowed the filmmakers into their personal lives. It’s intimate, raw and real. Through the Franklin’s eyes we see Missy’s swim-genesis and we glimpse her talent, foreshadowing her rapid rise to fame.

It’s the Franklin’s frailty that’s touching. We’ve all witnessed swim-parents struggle, learning the ropes as they dive into swim culture. Richard, Missy’s father, keeps it close to the vest, but it’s there. You hear it in the pace of his breath, the subtlest expression. DA, Missy’s mother, is strong as well, but her face is no mask. Every fear, doubt, and slightly potential regret is etched there. Parents worry for their children, and strive to hide it from them. All of these nuances play out onscreen. You live it with them. I found myself crying at odd times, when Missy’s a child, 7 or 8 years old, fiercely racing with an ugly age grouper stroke, or during the predawn blackness as the garage door opens and car departs for morning practice.

Kara Lynn Joyce enters the story as the old veteran, hanging on, hoping for one last crack at an Olympic experience. Most athletes face this moment  in their careers. Few depart early or at the top of their game. They stay because sport is pure, black and white, so familiar and understandable. You win or you lose. There is immense comfort in that. Most cling to it.

For Kara, she’s still got the magic. She believes it, knows it, but for much of the film her body isn’t cooperating. She joins Missy’s team, the Colorado Stars, training under head coach Todd Schmitz with a pool full of teenagers. Kara’s open about her reasons–fleeing a post grad program that disintegrated into chaos. While in Colorado, Kara comes across a little afraid, isolated at times, even lonely. Kara and Missy get along well, but it’s Kara playing the big sister. Kara’s career, her world as she knows it, is winding down, ending. Choosing the Colorado Stars with precious time left until the Olympic Trials comes across as an enormous gamble. Conversely, the filmmakers give you whiplash chronicling Missy’s rise. Missy is the sun, burning brighter and brighter.  Kara’s compassionate, giving, her praise for Missy geniune as the young star achieves each milestone, but the filmmakers capture Kara in the background, struggling. Much of Kara’s emotion is internal, but it manifests on her face in fleeting moments, and it it heart-wrenching to see.

Head Coach Todd Schmitz is young, early thirties, but clearly among Team USA’s biggest talent in the coaching ranks. He oozes passion on deck, commanding practice like a conductor leading an orchestra. At the pool, being a coach, he is in his element, completely at ease and confident.  Schmitz and Missy are locked in orbit. What they’re doing is working and working well.  However, Schmitz struggles with Kara, knows she doubts her choice to train with the Colorado Stars.

Tension mounts on a training trip to Florida. Schmitz leads the team on deck and lays out the big set of the day. Kara’s trashed, broken-down. She does NOT want to experience another grinder. There’s a confrontation. Harsh words are exchanged, and the filmmakers capture it all. Then there’s a hard cut to Schmitz on camera explaining what happened, explaining how much he understands Kara’s situation. Emotion wells, Schmitz starts to cry,  and he launches into why he does what he does. I heard snivels and nose-blowing all over the theater. This scene will reach into your chest and pull your heart out.  You need to see it. Ideally every swimming coach in the world needs to see this moment in a theater with Schmitz’s face 8 feet tall as he delivers this moment. If you’re a swimming coach, and you’ve ever doubted yourself or your profession, Schmitz will make you believe again.

The last act of the film is built around the US Olympic Trials, aka the meet of tears. Yes, we all witness swimmers on TV making the Olympic Team, but that’s only what the camera focuses on. US Trials is mostly about those who don’t make it and are in the large majority.  This tension infects the arena, and the filmmakers capture it expertly, putting you there, making you squirm in your seat. 99% OF SWIMMERS KNOW WHAT HAPPENS IN THE END OF THE FILM, but that doesn’t matter. You will relive this drama in a very palpable way.

Missy obviously makes the US Olympic Team in many events, but it’s the first time she does it that makes the tears flow. It’s not when she touches the wall in the arena or raises her fist in victory. It’s when she returns to her hotel to celebrate with her parents. It’s the hug, that long hug with mom and dad.

Kara obviously makes the team in the 50 free, and this moment is all in the pool, Kara’s expression, the complete surprise and elation.

SIDE NOTES, NON-CRYING REASONS WHY YOU SHOULD SEE THIS FILM:

Franklin’s parents got it right. They didn’t hover. They didn’t control. They just loved her.  If you’ve ever wondered whether or not the care-free, fun-loving Missy was an act for the camera–just too good to be true–this film proves she is 100% authentic. Her parent’s created an environment where a kid could live in the moment, respect and appreciate the moment, and be free to succeed without any baggage. Bravo! (Swim-parents should get medals too.)

SwimMAC Coach David Marsh is a star. The Marsh-Man missed his calling. He should’ve been a leading-man. The screen loves him… Marsh takes Kara 7 to 8 weeks before US Trials and we see her start to shine again. The Marsh Magic is real, but we merely glimpse it as much of the story is character-driven, focused on Kara’s internal journey. Also the filmmaker’s narrative is Missy and Schmitz-focused as we near the media madness they experience on the runup to Trials.

The filmmakers didn’t miss a beat in the story. It’s all there. My 5 Reasons do not do the film justice. If I have any criticism, it would be that I would liked to have seen a swimmer fall short of their goal. Failure is not a negative. It is absolutely essential, a huge part of why the sport of swimming teaches us so much. But, this one critique feels hollow. The filmmakers had no clue what would happen.  They followed their subjects, and both of them soared to London.  Maybe we can convince them to produce more swimming documentaries.

GO SEE THIS MOVIE! That’s my recommendation, and see it in a theater, with your team, and your parents. To sum the film up in a sentence, it is a love letter to our sport.  You don’t want to miss it.

To attend or schedule a screening of the film in your town, go here.

The swimming book “Gold in the Water” should be made into a movie….. Just need the right actor to play Jochums.

You should look up the Film-in-the-making “The Water is My Sky”. Very exciting!

You’ve sold me on it. I was gonna take a pass on it after reading the New York Times review, which made it sound pretty meh. I knew the Franklins were for real, they’re Canadian, and well, you can just tell. That part sounds fine, but I’m intrigued more by the story of Joyce and Schmitt, the gambles they both took, and how they worked through adversity and conflict together. Surprisingly, it’s going to be shown in a lot of local theaters here in L.A. on January 4th and it’s cheaper than the $20 to pre-order the DVD so I’ll be going to the theater to see a movie, for once. Looks like it will probably have limited mainstream appeal… Read more »

Hi, when will “Touch the wall” be available in the UK?
Thanks
Linda