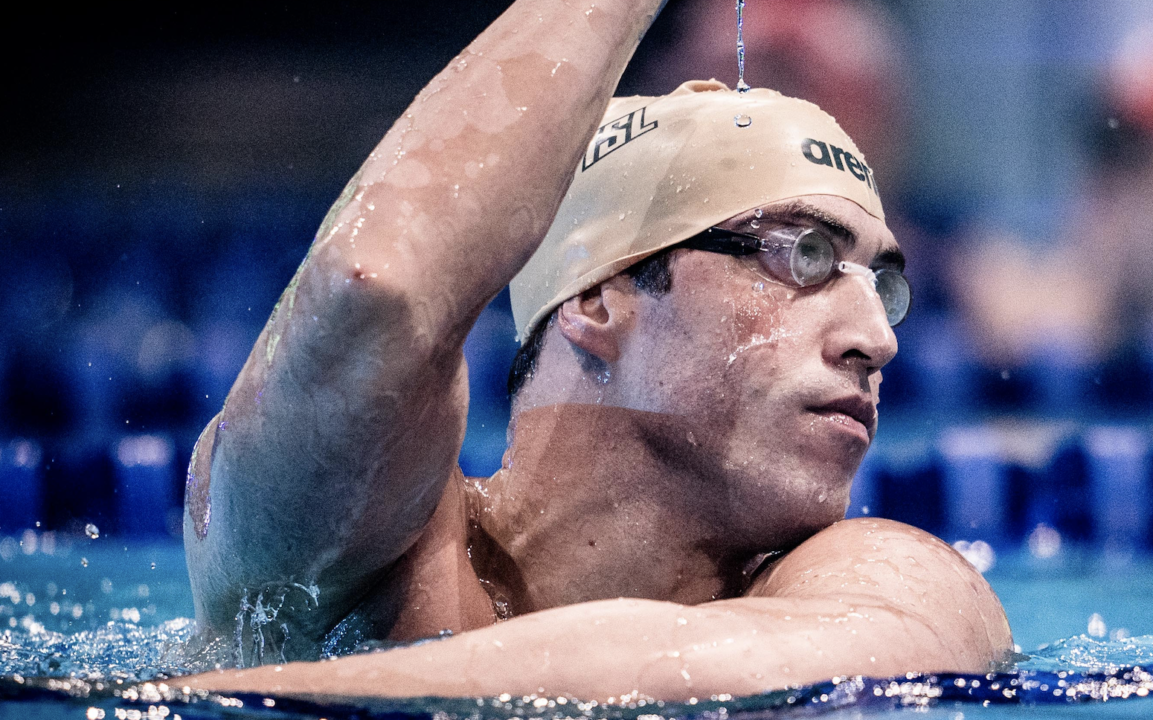 London's Guilherme Guido won two key battles between a stacked backstroke field in the first of two ISL semifinals this postseason. Archive photo via Mine Kasapoglu

The 2020 ISL postseason has officially begun. Here are five big storylines coming out of day 1 of semifinal #1:

London held star breaststroker Adam Peaty out of last week’s regular season finale. The rest appears to have paid off, as Peaty was on fire today as part of a London team that really showed up to compete.

Peaty beat Energy Standard’s Ilya Shymanovich in the 50 breast, hitting a career-best time and moving to #2 in the league this year. Peaty was 25.50 there. But probably his biggest swim was an unthinkable 54.84 split on the men’s medley relay. That beat Shymanovich (who had a great split himself at 55.1) by three tenths of a second, helping London win that key relay by .05 seconds.

London’s breaststrokers look awesome – Kirill Prigoda won the 200 breast in a major upset, handing Marco Koch his first loss this year in the 200 breast. And London will likely follow that on-fire streak into tomorrow’s skin race. With the medley relay win, they get to pick the stroke, and breaststroke is probably the most favorable to the London men.

The women’s 4×100 free relay was the fastest swim in the history of swimming. Energy Standard’s 3:25.82 goes well under the world record in the event – though FINA rules stipulate that all four members of a relay must be of the same nationality for world records to count. Energy Standard did the same thing last year, hitting the fastest time ever without an official world record, but last year they did it by hundredths. This year, they did it by almost a full second.

Then, in the medley relay, the team of Emily Seebohm, Benedetta Pilato, Maddy Banic and Sjostrom went 3:45.58 for the win, smashing the ISL record and coming within three tenths of a second of the fastest time ever.

Energy has a shot to win both relays in next week’s final. That would hand the Cali Condors their first medley relay loss ever. With Energy breaking Cali’s ISL record today, the potential for that streak to end has never looked so strong.

For the second straight year, a London Roar backstroker was the first swimmer to break an official world record in the ISL.

Last year, it was Australian backstroker Minna Atherton. Today, it was Dutch backstroker Kira Toussaint, who went 25.60 to break a six-year-old world record in the 50 back. Toussaint entered the league with a career-best 25.75 from the 2019 European Championships. She matched that time exactly last month in ISL competition. But today, Toussaint busted that 25.60 to slide under Etiene Medeiros‘s world record of 25.67 from 2014.

The London men have struggled mightily in the 400 free this season. They went 6th and 8th in their season opener. Then, despite adding James Guy and Tom Dean to the roster, they went just 5th/6th and 6th/7th in their next two matches.

Last week, Dean started to heat up with a 3rd-place finish. But today, he exploded for a four-second drop, winning the race in 3:37.87.

Dean’s win was the first time all year that anyone has beaten Energy Standard’s Danas Rapsys. It also gave London its first win in the event for 2020, and shored up what used to be a major London weakness heading into next week’s final.

In our meet previews, we noted how good the backstroke fields were set to be on the men’s side. Today’s meet gave us three head-to-head showdowns in the field.

London’s Guilherme Guido was the big winner. He took home the 50 back title in 22.89, leading a 1-2 with teammate Christian Diener. Then, he returned to beat all swimmers on the 100 back leadoff leg of the men’s medley relay, improving his season-best to 49.40 and beating league record-holder Kliment Kolesnikov (49.63) head to head.

The whole gang should reconvene tomorrow for the individual 100 back, where Guido and Kolesnikov get to tangle again, with Diener and Irie likely in the field along with Energy’s Evgeny Rylov or Matt Grevers.

A propos of nothing, but really looking forward to the men’s 200 free today. Scott and Dean dropping a lot of time from group stage matches, up against Rhapsys and Matsumoto. Should be a cracking race.

I’m not sure who they’ll choose between Vekovishchev and Dean. Dean looks ripe for a big PB but Vekovishchev has been 1:41 in the last year too.

The women’s 400 free is still a big issue for London. If the scheduling was different and the 400 free wasn’t the event before the medley relay then I am almost certain that Freya Anderson would be swimming the 400 free. It’s a shame we’ll never see that as I think she would definitely be up there for London and could bring in a few much needed points.

Agreed. I wonder if it might make sense to do it anyway. On today’s evidence I’m not sure London are a match for ENS or Cali in the women’s medley relay even with Freya. They’re leaking a bit too much on the other three legs. So you could conceivably stick Hopkin onto the A relay (with Kameneva taking over free on the B relay?) and put Anderson in the 400 instead. You might lose say 0.5-0.7 on the medley relay, but I don’t think it would effect the placing (probably third), and there’s a potentially quite good gain on the 400 free?

I don’t expect London to do it: the value of winning the medley relay is far too high… Read more »

Roar already has a faster best time this season than Cali.

Well I feel like a pillock now. I was probably thinking about Cali beating London H2H twice, and forgot that London’s women had smoked the medley relay in their previous match.

Anderson onto the 400 free makes sense. Given the likely finalist lineup I am not sure picking womens skins benefits London too much anyway. They dont have two top swimmers in any 50m strokes or any strokes they really have to avoid.

London seems to have treated this series more like a traditional season, training through the early meets and then peaking for the bigger ones. Most of the other teams have treated it more like a World Cup season, trying to garner as many paydays as possible. Not saying one or the other approach is better, but what a difference for London today.

Well last year quite a few of their swimmers peaked too early and were slower in Vegas. So it’s a nice change.

It was a great first day of swimming. Considering we were supposed to be coming off Olympics high, I’m so grateful to have the ISL.

Excited for day 2, and ofc the next semis

Guido time is a new SA record improving his previous 49,45

I guess Guido’s consistency during the pre season was affected by training and last year he was probably having a little rest before each match with how spaced out they were.