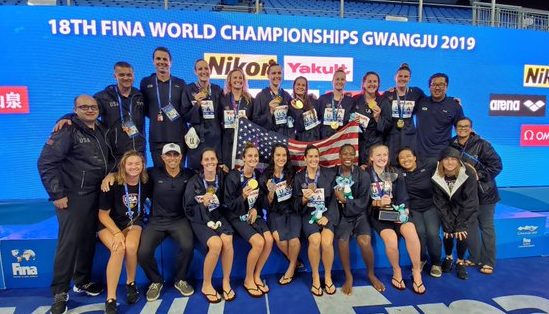 Australia rounded out the podium with the bronze medal, topping Hungary 10-9. It was Australia’s first Worlds medal since a runnerup finish in 2013.

Spain punched its ticket to the 2020 Olympics, despite finishing second, as the United States already earned their place with a gold medal at the World League Super Final in June.

The USA bested Spain 11-6 in the championship match in a repeat of the 2017 World Championships final standings (13-6 USA).

The Americans grabbed a 3-1 lead in the opening stanza and poured on four goals in the third quarter to pull away for the 11-6 victory. Maggie Steffens, Paige Hauschild and Stephanie Haralabidis got the scoring started for the USA, but Roser Tarrago I Aymerich knotted the score at 3 for Spain with an action shot and extra-player goal in the second quarter. Team USA ended the first half with extra-player goals by Makenzie Fischer and Melissa Seidemann to lead 5-3.

The Americans continued their rally with four more goals in the third quarter, including a counter attack and an action shot by Kiley Neushel. Spain got a penalty goal from Tarrago I Aymerich just 27 seconds in the final period, but the USA countered. Judith Forca Ariza put in an extra-player goal (6:27), but again the United States answered. Spain scored one final goal, an extra-player try by Beatriz Ortiz Munoz, but it was too little too late.

The USA scored on 11 of 25 shots, including 5 of 7 extra-player tries. Neushul led the way with three goals, while Steffens added two. Six other players got in on the scoring. Goalkeeper Ashleigh Johnson saved 74 percent of the shots she faced (14 of 19).

Tarrago I Aymerich logged a hat trick for Spain and Ortiz Munoz scored twice as Spain made just 6 of 28 shots, including 3 of 10 extra-player chances and one penalty. Goalie Laura Ester stopped just 5 of the 16 shots she faced (31 percent).

Australia grabbed a slight 7-6 lead at the half and held on for the victory to claim the bronze medal, marking its first podium finish since 2013 (silver).

The Aussies jumped out to a 3-0 lead, including a penalty goal by Zoe Arancini, only to see Hungary storm back with four straight scores in the next six minutes, an action shot, two extra-player goals and a counter attack. The teams tied at 4 and 5, before Greta Gurisatti put Hungary up one final time at 6-5 (1:52, 2nd). Bronwen Knox put in an extra-player goal and Hannah Buckling scored in a driving situation with eight seconds left in the first half to give Australia a 7-6 lead.

Hungary tied it at 7, but the Aussies scored three in a row to make it 10-7 with 5:11 left in the game. An extra-player goal by Amy Ridge and action shots by Bronte Halligan and Rowie Webster accounted for the scores. Hungary battled back with an extra-player goal by Dorotiya Szilagyi (4:34) and a penalty by Rita Keszthelyi (2:52), but had its last three shots stopped, one saved, one that hit the post and a final six-meter direct shot blocked, to seal the Australian victory.

Arancini scored three times to lead Australia, while Buckling and Knox each added two scores. Australia made 10 of its 28 shots, including 3 of 7 extra-player tries and its lone penalty.

Keszthelyi notched a hat trick for Hungary, while Gurisatti scored twice among six scorers. The Hungarians made 9 of 25 shots, including 5 of 13 extra-player tries and one penalty. Starting goalkeeper Alda Magyari stopped just 1 of the 8 shots she faced (13 percent). Edina Gangl took over in the second half and made 7 saves in 10 attempts (70 percent).

A five-goal third quarter lift Russia past Italy for a 10-9 win in the fifth-place match.

Russia trailed 5-4 after 16 minutes, after three Italian extra-player goals, two by Izabella Chiappini. The Russians opened the second half with five straight goals to take a 9-5 lead, bookended by an action shot and a counter attack by Ekaterina Prokofyeva.

Italy ended the third period with scores by Chiappini and Giulia Emmolo (9-7) and continued the rally in the fourth quarter with two more by Roberta Bianconi to tie the game at 9 with 3:07 to play. Russia had a shot blocked and a second saved, before Alena Serzhantova found the back of the net with the game-winner, an action shot with 31 seconds left. For its part, Italy took four shots in the final three minutes, one hit the post, one was blocked and two were saved.

Prokofyeva, Anastasia Simanovich and Anna Timofeeva put in two goals each to lead seven Russian scorers. Russia made 10 of its 31 shots, including 1 of 4 extra-player tries, and missed its lone penalty.

Italy got hat tricks from Bianconi and Chiappini as the team made 9 of 35 shots, including 3 of 5 extra-man tries and 1 of 2 penalties.

A 6-3 first half lead gave the Netherlands enough cushion to withstand a second half surge from Greece in an 11-9 victory for seventh place.

Greece grabbed an early 2-1 lead with an extra-player shot by Alkisti Avramidou and a center shot from Eleni Xenaki, but the Dutch countered with five of the next six goals in the second quarter. Sabrina Van Der Sloot put in an extra-man goal and a center shot in the first minute of the second period to put the Dutch on top 3-2, giving them a lead which they would not relinquish.

Simone Van De Kraats, Maud Megens and Dagmar Genee finished the half with goals to give the Dutch a 6-3 edge. Greece erased the deficit, tying the score at 8 as five different players found the back of the net. Two center shots, two action shots and an extra-player goal leveled the score at 8. The Netherlands responded with a center shot and a counter attack by Maartje Keuning to push ahead 10-8. Christina Kotsia had Greece back within one as the third quarter ended, scoring an action shot with two seconds left.

The teams combined for 12 shots in the fourth quarter, but just one made it onto the scoreboard, an extra-player goal by Genee with 36 seconds remaining. The Dutch had four shots saved and two blocked, while Greece had two saved, two blocked and missed one shot.

Megens and Keuning led the Dutch with three goals apiece, while Genee and Van Der Sloot added two each. The Netherlands made 11 of 29 shots, including 5 of 13 extra-player tries.

Kotsia led Greece with a hat trick, while Xenaki chipped in two scores. The Greeks made 9 of 32 shots, including 2 of 4 extra-player tries.

Ol’ Longhorn will find something wrong with this….

Now this women water polo is the best water sport for California since most of the team is from California.