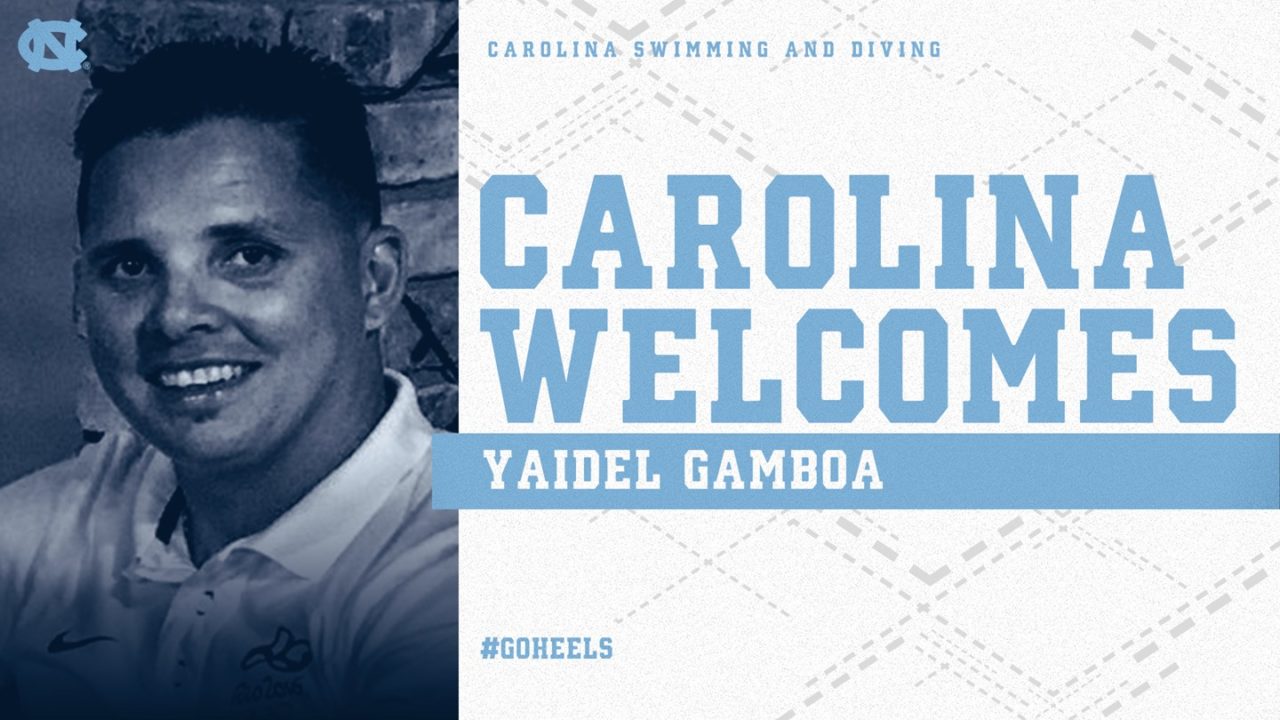 “Yaidel Gamboa is a world-class diving coach and I am honored that he is eager to join the Carolina staff,” Gangloff says. “I have watched him coach for a year and in that time it has become clear that he is motivated and disciplined; he wants to work with the best divers in the world and trains his athletes to become just that. He is a technical expert and a good colleague. Athletes want to dive for him and coaches want to coach with him. Together, we are excited about the future of Carolina diving!”

“I am extremely thankful to Mark Gangloff and UNC for giving me the opportunity to join the swimming and diving coaching staff,” Gamboa says. “UNC has one of the best academic programs in the country and it’s also known for its success and culture of excellence on the athletic side. I know Mark is a great person with great values and a unique competitive character that will bring this program to its best. This opportunity means the world to me and I am planning on using it to the best of my capabilities. I cannot wait to see what we can do together! Exciting times, Go Heels!”

Gamboa coached a trio of NCAA Championships qualifiers last season at Missouri. On the men’s side, senior Kyle Goodwin earned honorable mention All-America honors with top-16 finishes in both springboard events, while freshman Isaac Khamis competed in the platform diving event as the Tigers finished 11th in the team standings. Senior Payton Conrad qualified in the women’s platform event.

Gamboa coached one World Cup and two Junior World qualifiers as the assistant diving coach for City of Midland Aquatics in 2018 following a stint as the head diving coach at Florida Atlantic. He earned C-USA and Coastal Collegiate Sports Association (CCSA) diving coach of the year honors after coaching FAU’s Victoria Moretti to a pair of NCAA Championships berths and Ryan McIntire to two CCSA titles.

While in south Florida, Gamboa also served as an assistant coach for the Fort Lauderdale Diving Team. One of his divers claimed the 2016 USA Diving Winter National Championships synchronized men’s platform title, while another took home bronze in the synchronized men’s 3-meter at the same meet. Gamboa also guided eight divers to national titles at the 2016 YMCA National Diving Championships.

Gamboa also spent time with the Zulia diving team in Venezuela and the YMCA of Central Florida. In Venezuela, he coached one diver who qualified for the Junior World Championships and three that made the Venezuelan National Team.

An accomplished diver in his own right, Gamboa was a member of the Cuban National Team from 1993-2001 and won 10 national titles, all at the junior level. Gamboa then moved to coaching, where he coached in Cuba from 2003-07, guiding his divers to four national team titles.

Gamboa earned a bachelor’s degree in physical education and athletic training from the University of Habana (Cuba) in 2005.

In addition to the Gamboa hire, Gangloff also confirmed that current assistants Christy Garth and Michael Baric will remain part of the Carolina coaching staff.

“Perhaps equally as exciting as Yaidel’s announcement is that the UNC swimming and diving staff is now complete,” Gangloff says. “This staff, which is comprised of both new and returning coaches, will take Carolina swimming and diving to the next level.

“Christy Garth and Michael Baric are returning from last year’s staff. Christy, a Tar Heel through and through, is an excellent recruiter and a great role model for our student-athletes. Michael demonstrates the ability and desire as a young coach to become an expert in our industry. Jack, Christy, Allyson, Michael, Yaidel and I look forward supporting our current and future student-athletes as they strive for excellence in and out of the pool. Go Heels!”

Another solid hire for the Tar Heels! Great opportunity for up and coming divers to join the success train at UNC.