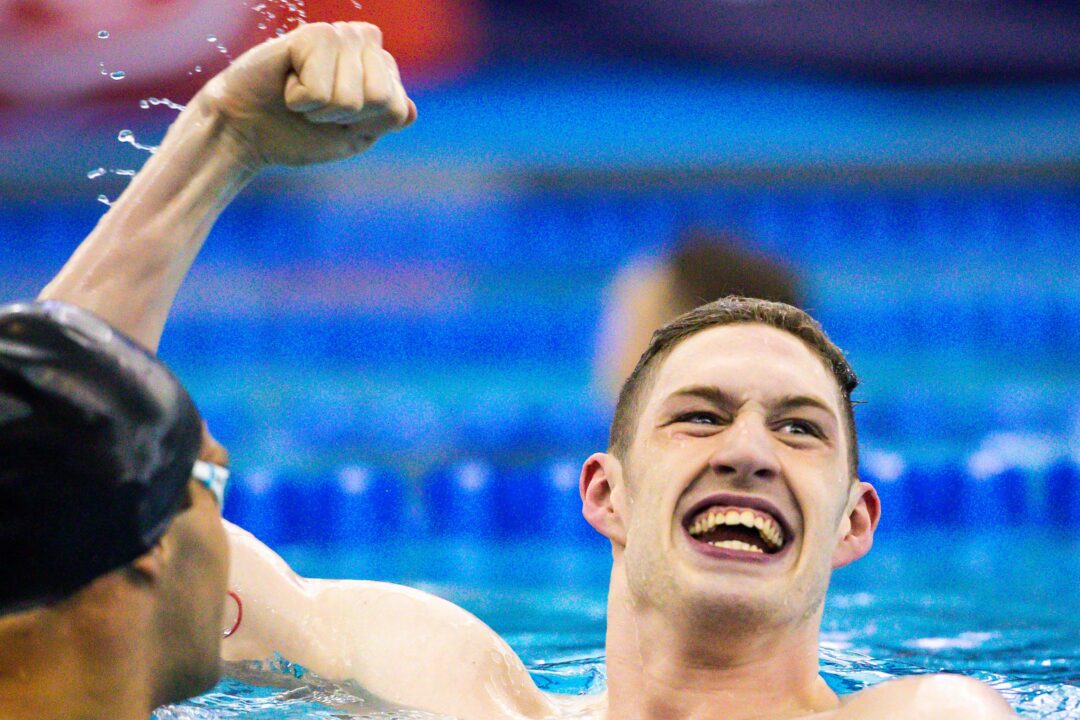 Hunter Armstrong and Ryan Murphy are on the verge of another 51-second performance in the 100 backstroke, but it's the rising star versus the veteran. Current photo via Jack Spitser/Spitser Photography

The men’s 100 backstroke is always a thrilling race, but this year it is missing Russian duo Evgeny Rylov and Kliment Kolesnikov. Rylov claimed the Olympic gold medal in both the 100 and 200 backstroke last summer in Tokyo, with Kolesnikov a mere 0.02 behind in the 100 to earn silver. Due to the current ban on Russian athletes, two men who would otherwise be podium favorites are out of the conversation entirely. For reference, Rylov won in a 51.98 while Kolesnikov put up a 52.00 for silver with Murphy touching 3rd in 52.19. Italy’s Thomas Ceccon placed 4th in 52.30, the current Italian Record, with 2016 silver medalist Xu Jiayu of China taking 5th in 52.51. It’s worth discussing the 4th- and 5th- place times from Tokyo 2020 since Rylov and Kolesnikov are out of Budapest 2022.

American Hunter Armstrong has become one of the most talked about swimmers of 2022 following his World Record performance in the men’s 50 backstroke at the 2022 U.S. National Championships. Armstrong lowered Kolesnikov’s former mark of 23.80 to a 23.71, claiming gold in a packed field that turned out the 1st-, 3rd-, and 4th-fastest performers of all time in the race. Armstrong turned heads again when he upset Ryan Murphy to win the 100 backstroke in a time of 52.20, making Armstrong the fastest in the world this year and the 10th-fastest performer all-time. Armstrong tied for 9th last summer in Tokyo, swimming about 0.8 slower than he did at U.S. Trials in Omaha. Now, Armstrong is more experienced and a World Record holder. His chances of getting under the 52-second barrier in the 100 backstroke seem very high, though he’ll have a larger program than he did in Tokyo where he only raced the 100 backstroke and 4 x 100 medley relay.

World Record holder Ryan Murphy had somewhat mixed results at U.S. Trials. Murphy won the 200 backstroke, took 2nd in the 100, and placed 4th in the 50. Murphy produced a 52.46 in Greensboro which ranks him 2nd in the world behind just Armstrong. These results are by no means bad, though it was not as dominant of a showing on the national stage as we’re used to seeing from Murphy. For instance, at the 2020 U.S. Olympic Trials Murphy won both the 100 and 200 backstrokes, and at the 2018 U.S. National Championships he won the 50, 100, and 200 backstrokes. Even so, Murphy placed 3rd in Tokyo in the 100 and 2nd in the 200 last summer and he will be a threat to win his first individual world championships titles in Budapest next week.

China’s Xu Jiayu stepped up as one of the greatest backstrokers in the world in 2017, the last time the World Championships were held in Budapest. In 2017, Jiayu won the 100 backstroke, besting both Murphy and American teammate Matt Grevers. Jiayu repeated as world champion in 2019, setting the current Championship Record of 52.17. At the 2020 Tokyo Olympics Jiayu placed 5th, though he was well off of his lifetime best of 51.86, the 2nd-fastest performance of all time, done in April of 2017.

Australia’s Mitch Larkin is the co-7th-fastest performer all-time in the 100 backstroke with a 52.11 from 2015, though he placed just 7th in the Olympic final in Tokyo last summer with a 52.79. Larkin is slightly better at the 200 backstroke, being the 2016 Olympic silver medalist in the event and 4th-fastest performer all time, though he elected not to swim the race at the Tokyo 2020 Games. Without the Russian contingent, Larkin could find himself back in the hunt for a medal, though he’ll likely need to be under 52.50 in order to get on the podium, based on Tokyo 2020 results. Larkin has been exactly 52.50 or faster 9 times, though only faster than Armstrong’s 2022 world-leading 52.20 once in 2015.

Spain’s Hugo Gonzalez had an amazing 2022 NCAA season, as well as a rather stellar 2021 long course season. Gonzalez won the 200 IM at the 2021 European Championships, as well as placing 2nd in the 100 backstroke to Romania’s Robert Glinta, touching in 52.90. Gonzalez also has speed, having taken 3rd in the 50 back at Euros in 2021 with a 24.47. Gonzalez placed 6th in the 100 back in Tokyo last summer with a 52.78. While he’s better known in the US as the defending NCAA Champion and fastest-ever in the 400 yard IM, internationally he has really been shifting his focus to the backstrokes and the shorter 200 IM. Given how good he was during the NCAA season, it doesn’t take a huge leap to see him improve from his Olympic best time, which would probably get him into the final.

Japan’s Ryosuke Irie has been a staple of the backstroke since breaking his first World Record in the 200 backstroke in 2009. While Irie has had more success on the international stage in the 200 back, he has swam under 53 seconds in the 100 back an impressive 28 times, the latest coming in April when he delivered a 52.88 at the Japan Swimming Championships. Irie tied for 9th with Armstrong last summer, just missing the final. At 32-years-old, Irie is one of the oldest swimmers in the meet.

France’s Yohann Ndoye-Brouard and Mewen Tomac aren’t quite the backstroke duo that Camille Lacourt and Jeremy Stravious were in 2011 and 2012, but either one could slip into the final in Budapest. Tomac placed 14th at the Tokyo Olympics, while Ndoye-Brouard was disqualified in the semifinals for an illegal turn after miscounting his turn and crashing into the wall. He posted a 53.13 in prelims, qualifying 5th. Ndoye-Brouard swam a 53.15 at the Canet stop of the Mare Nostrum tour, ranking him 8th in the world this season, while Tomac has a season best of 53.72 from the French Elite Championships in April, good for 18th in the world this year. Granted, these rankings shift going into Budapest in that 4 of the swimmers ranked ahead of Tomac are Russian, 6 are American, meaning 4 of them will not compete in Budapest, and the other is South Africa’s Pieter Coetze, who has pulled out of the meet. Therefore, Tomac may as well be ranked 7th in the world as far as the competition in Budapest is concerned.

Greece’s Apostolos Christou lowered the Greek National Records in the 50 back, 100 back, and 100 free last summer at the 2021 European Championships, though he missed out on the Olympic final in the 100 back in Tokyo last summer. Christou has been 53.59 this season, almost a second above his lifetime best yet still fast enough to rank 13th in the world and 6th on the psych sheets.

Dark Horse: Luke Greenbank has been Great Britain’s go-to backstroker since Chris Walker-Hebborn retired in 2018, though backstroke is still by far Britain’s weakest medley relay leg. Britain did upset the USA at the 2019 World Championships, though Greenbank was the 2nd-slowest in the field. Greenbank improved a lot over the following two years, rising to win a bronze medal at the Tokyo Olympics in the 200 backstroke, though he would only place 17th in the 100 backstroke. However, with a thinned-out field, Greenbank will likely get a 2nd swim and maybe even a 3rd.

Two time defending world champion, and second best all-time… but only predicted for 8th? Is there an injury, or just purely because he hasn’t raced a lot? He’ll be in the hunt for 3rd.

Swimswam has been low on just about every Chinese swimmer not named Zhang Yufei.

Yep zhang yufei and Wang shun are the only ones from the predictions winning.

To be fair it’s hard to know what to do with them after their trials were cancelled.

Irie also technically never broke the 200 back WR in 2009, FINA making some undue fuss apropos of the suits.

Irie’s season best is in the wrong column. His lifetime best is also a supersuited 52.24.

Which brings the thought, how many active swimmers today have a supersuited best time? Must be very small. Hosszu in the 200 fly is one, can’t think of anyone else as Cseh and Pellegrini have retired.

I’m not sure if Anastasia Fesikova (Zueva) is still swimming or if she retired after Tokyo, but her best times were from 2009. That was the only other swimmer I could think of.

I’m saying it’s a 3 way fight for Gold with Armstrong just winning out and Ceccon beating Murphy for Silver.

My username says it.

I tend to think that, indeed, this will be a Murphy vs. Armstrong set of events all the way thru the World Championships. Of course, I prefer to look at this competition as a classic Enthusiasm vs. Experience set of races. For me, Enthusiasm/Armstrong is a great story, but, in the end, I think Murphy’s vast experience will literally win the day.