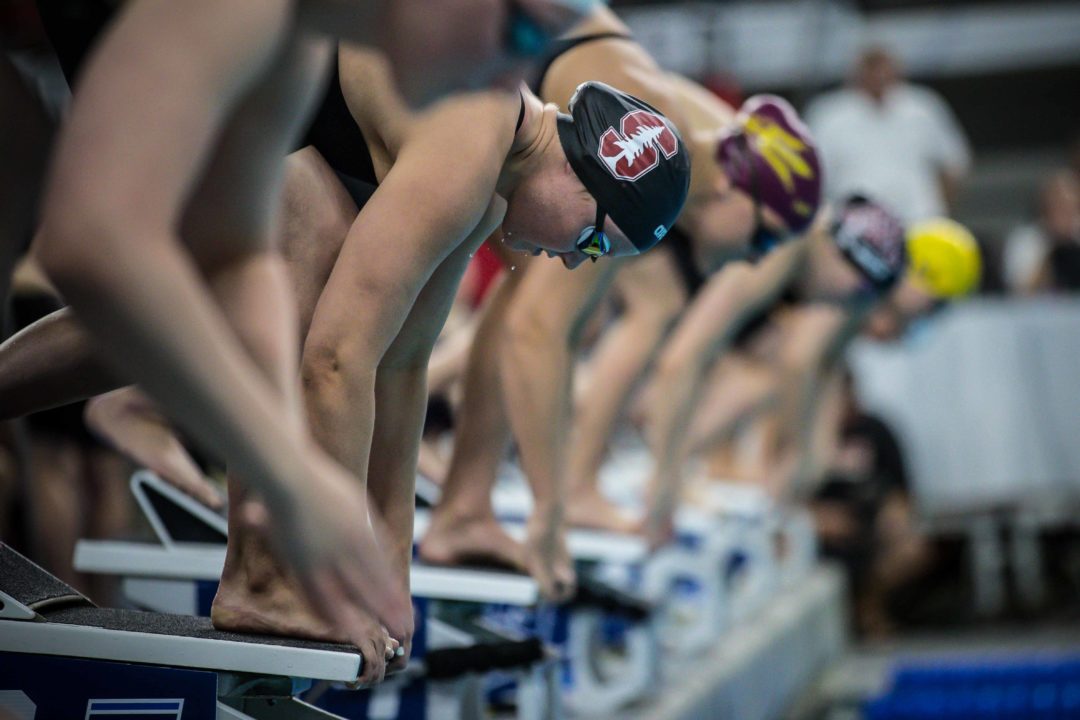 Senior Morgan Tankersley is one of eight Stanford swimmers who qualified for an 'A' final on Day 2, as she claimed the top seed in the 500 free. Archive photo via Jack Spitser/Spitser Photography

Before getting into the prelim numbers, here’s a look at how the team scores currently stand after Wednesday’s relay and diving events at Pac-12s:

After claiming the team lead on Wednesday night with two relay wins and a pair of top-five diving finishes, the Stanford women carried that momentum forward Thursday morning by putting eight swimmers through to tonight’s ‘A’ finals.

The Cardinal own the top time from the prelims in the 500 free from senior Morgan Tankersley, the top two in the 50 free with Taylor Ruck and Anya Goeders, and sit 2-3 in the 200 IM with Torri Huske and Brooke Forde trailing USC’s Calypso Sheridan.

The Cal women matched that total with eight ‘A’ finalists, including four moving through in the 200 IM. However, the team’s highest seed coming out of the heats is fourth (Izzy Ivey in the 200 IM).

With an additional seven swimmers moving on to ‘B’ finals, the Bears are projected to outscore Stanford tonight in individual swimming events. However, Cal was already down 88 points to Stanford before the first relay hit the water yesterday after 1-meter diving, and the boards will continue to be a hindrance to the Bears for the entirety of the meet.

Even if Cal outscored Stanford by the 58 points they’re projected to tonight, they would still be down 48 to the Cardinal (not even factoring in tonight’s 3-meter diving final).

USC had a strong morning as well to score a project 202.5 points with five swimmers moving on to ‘A’ finals.