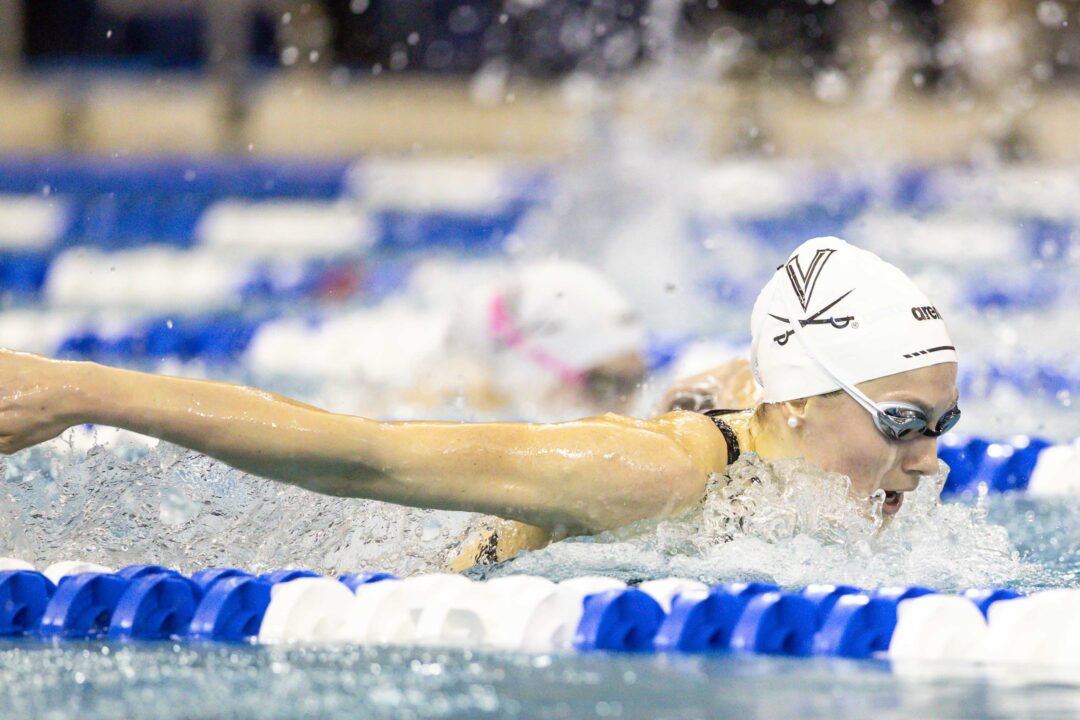 Alex Walsh's field-leading 49.45 butterfly split was crucial for Virginia to close the gap between them and NC State to take the win in the 400 medley relay. Current photo via Jack Spitser/Spitser Photography

In the women’s 400 medley relay, Virginia tied their own NCAA, US Open, and American Record in a time of 3:22.34 to take the NCAA title. They used the same quarter of swimmers that they used at ACCs when they set the record, which included Gretchen Walsh, Alexis Wenger, Alex Walsh, and Kate Douglass.

NC State’s Katharine Berkoff had the fastest backstroke split with a time of 49.25. Her leadoff was a bit slower than her 48.74 NCAA record set a few hours ago, but good enough to give the Wolfpack the lead. Three swimmers were under 50 seconds, and they included Berkoff, Virginia’s Gretchen Walsh (49.44), and Stanford’s Regan Smith (49.81).

On breaststroke, Sophie Hansson extended NC State’s lead with a 56.67 breastsroke split, the fastest in the field and the only time under 57. Her split is the ninth-fastest 100 breast relay split of all time, and only Lily King and Anna Elendt have been faster on this relay. Kaitlyn Dobler, the newly crowned indivdual 100 breast champion, split 57.04 for USC in the B-final. Her split was the second-fastest behind Hansson, and helped her team finish seventh.

Alex Walsh was able to make Virginia even with NC State with her 49.45 fly split, which surpassed the rest of the field by over half a second. Her split was 0.56 faster than the second-fastest swimmer on fly, which was the widest margin for a top split across all the strokes. She was the only woman under the 50-second barrier. Stanford’s Torri Huske, who flat started a 49.17 in the individual 100 fly, went signifcantly slower on this relay with a 50.01.

Finally, to close things off, Kate Douglass sealed the win and widened the gap between Virginia and NC State with a field-leading 46.18 freestyle anchor. This split was slightly faster than the 46.25 that she swam to anchor at ACCs this February.

Take a look at all the ranked splits here:

I note that Huske’s medley relay splits here and at the Olympics were a bit slower than her individual. In my opinion, she will break the WR before Paris but the US crucially needs her to hit a fast (faster than individual) relay split.

Torrie picking up a full second in the 4 medley will be what’s looked at at the pivotal moment in this meet should Stanford not win. Hansson dropping over 1 second is impressive. Difference in someone who delivers their best for team vs individual

Good relay swings are 1/2 second per fifty, how are people only going their flat start times? That’s bad coaching, right?

fatigue maybe? lots of young people also had omicron in the last few months and long covid isnt very uncommon. i have lots of peers in their 20’s who say they can feel lung capacity effects from covid months later still

1/2 per fifty is a bit much.. maybe 1/2 for a relay Vs flat start.. Depending on number of swims in a session, at least being your best flat start time is expected.

10
-3
Reply
What do you Finke this is, some sort of joke?
Reply to  Braden Keith

Sounds like you have never ridden the hype train

Exactly. If you’re a 1:33 200 freestyler the expectation should be 1:31 on a relay when you factor in the swing, the hype, and the hype machine (which, like Santa Claus, is real).

I’ve had conversations with power 5 coaches who sheepishly agree they ask backstrokers if their PRs are on relays or not. I’ve also had those coaches quietly admit they don’t spend enough time on exchanges.

Yeah, that checks out.