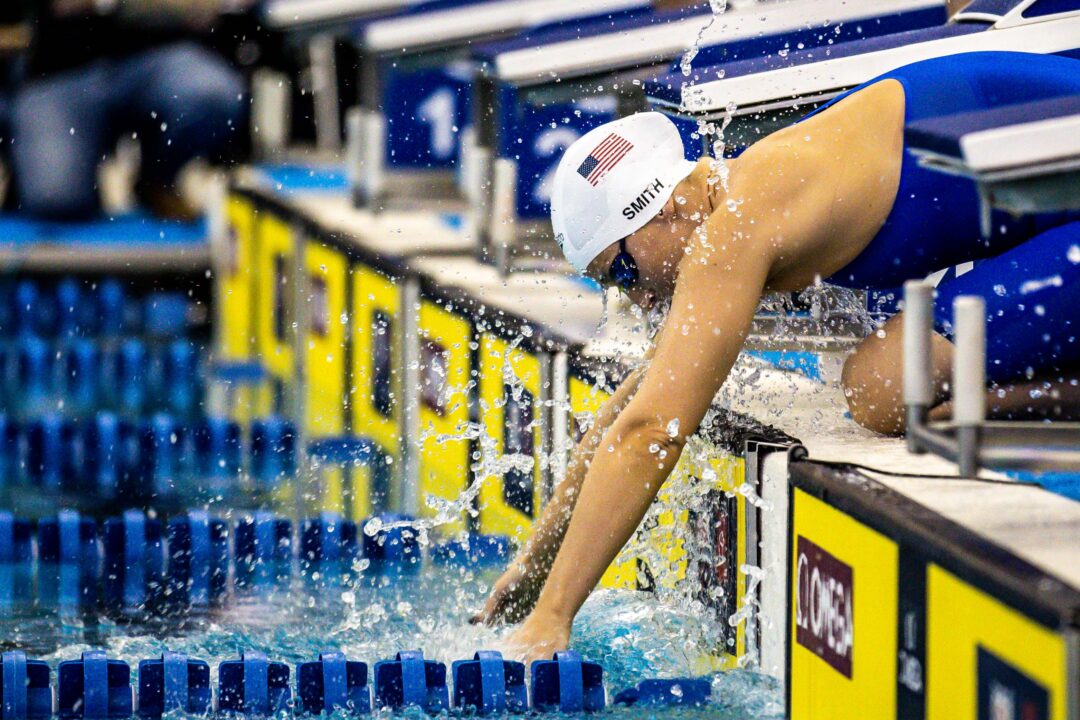 After likely qualifying for Worlds in two events, Leah Smith has scratched the 400 IM where she was the #3 seed, for Day 3 prelims. Current photo via Jack Spitser/Spitser Photography

There are a number of scratches for Thursday morning’s day 3 prelim session. The most notable of these is Leah Smith in the 400 IM, who would have been the number three seed.

Smith has been on fire through the first two days of the meet. On Day 1, she finished second to Katie Ledecky, swimming 8:17.52 in the 800 free to come within a second of her lifetime best and most likely qualify for the Worlds team.

She officially punched her ticket to Budapest by finishing third in the 200 free with a 1:57.44 to secure a spot on the 4×200 relay. Her scratch in the 400 IM makes the event even more of a two person race between Emma Weyant and Hali Flickinger, as #4 seed Justina Kozan sits almost seven seconds behind #2 Flickinger.

After he broke the American Record in the 100-yard backstroke last month at NCAAs, many were excited to see what Luca Urlando would bring to the 50 backstroke. The scratch isn’t a total surprise, as he has the 100 fly earlier in the session, where he is the #6 seed. He also scratched the 50 fly, indicating his focus is on other distances this week.

Notably, after entering seven events, Bella Sims chose to lighten her schedule by scratching the 100 fly.

Wanted to see Luca swim that 50 back. I know he can swim a monster 100 in yards and wanted to see how it would translate to a 50 LC

Disappointing to see Aiden scratching so many events. Has he just up and scratched the entire meet?

Leah probably wants to get ready for that 400 Free 🙂