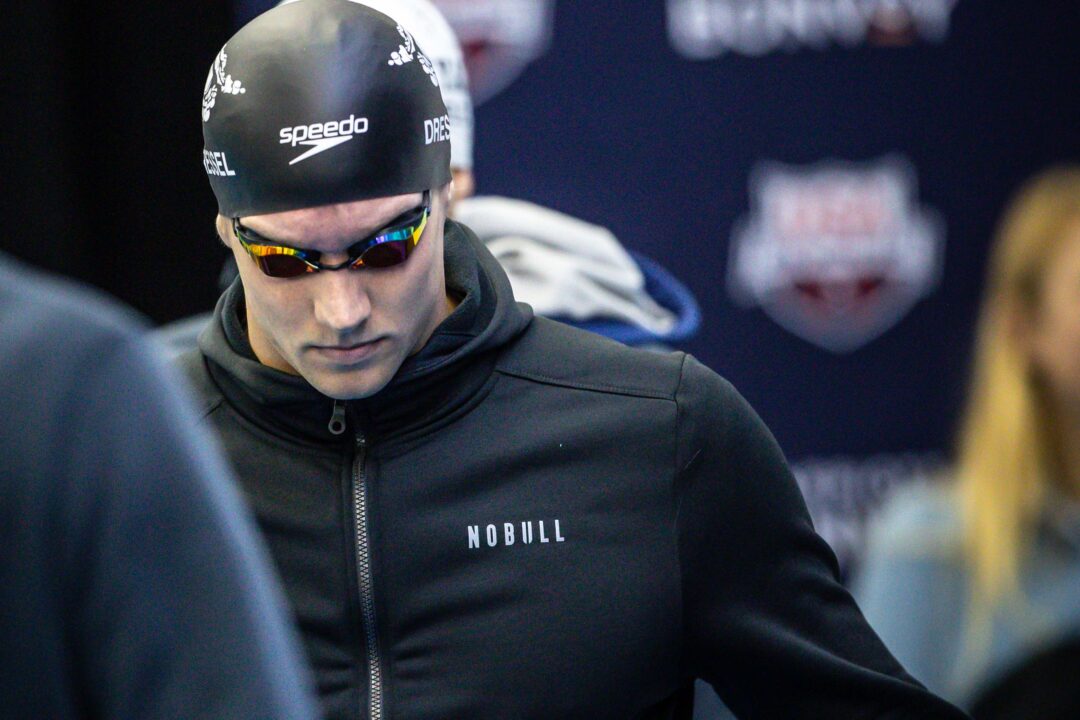 Caeleb Dressel got candid about how pressure impacted his mental health before and after his record-setting performance at the Tokyo Olympics. Archive photo via Jack Spitser/Spitser Photography

Caeleb Dressel got candid about how immense pressure impacted his mental health leading up to the Tokyo Olympics — and even in the aftermath of last summer’s record-setting performance.

In an interview with Graham Bensinger airing fully this weekend, the seven-time Olympic gold medalist revealed profanity-laced reflections in a logbook from just a month before the 2021 Olympic Trials.

“Yeah, ‘F**k me, f**king terrible. My body is done.’ Oh jeez… I know I’m laughing a little bit, but when you’re writing this, this isn’t as a joke,” Dressel said. “This is good information. ‘F**k me. F**k my body. F**k swimming.’ Jeez. Yeah there’s a totally different side of the sport that a lot of people don’t see… I try to be as honest with myself as I can in these books ’cause these aren’t for — well until now — these aren’t really for anybody else’s eyes.”

“I didn’t hit any of my goal times in Tokyo,” Dressel said. “Yeah… And that’s not fair to myself. That’s not fair at all. Like I just won five gold medals on the biggest world stage in sports, and I’m thinking about how I wish I would’ve gone faster in certain events.”

Perfectionism, it seems, can be a dangerous, double-edged sword.

“Usually you’re trying to motivate someone to be better than what they think they can be,” said his former coach, Gregg Troy, who he parted ways with amicably last November. “And now you’ve got a guy that’s as good as or better than anyone and he never thinks it’s good enough.”

“I think that’s what makes me great,” Dressel added, “but I think that can also be detrimental if I want to have longevity in the sport.”

Dressel joins a chorus of other top athletes including Simone Biles and Naomi Osaka in openly discussing mental health issues. Dressel’s family and friends recalled his first bouts with panic attacks and depression as a high school senior, which coincided with his emergence into the national spotlight as a top recruit for the University of Florida.

“I didn’t want to do anything — wasn’t going to school, wasn’t swimming,” Dressel said. “[I] was pretty much just laying in bed for all hours of the day, for a couple months.”

“[He] didn’t want to eat,” said his mother, Christina. “I was like, ‘Caeleb you have to get out of this dark room… He was just in a deep depression. He just didn’t want to be around people… I think it was just a reminder of, ‘Great, I let this person down ‘cause I didn’t get a world record.’”

With no Michael Phelps at the Olympics for the first time in decades, the stage grew to unprecedented sizes for Dressel. Troy described the months following Tokyo as “his senior year on steroids,” in terms of mental health struggles.

“Yeah, it’s brutal,” Dressel said. “I think the added attention, the monumental moment in our sport is the Olympic games, an event that happens once every four years… my longest race is lasting 49 seconds, my shortest is lasting 21 seconds.”

In his first major meet under new coaches Anthony Nesty and Steve Jungbluth, Dressell won the 100m free in 47.79 at U.S. trials on Tuesday, qualifying for June’s world championships. He’s looking to capture his third straight world title in the showcase sprint. Dressel was a no-show for the 200m free prelims on Wednesday morning. He is slated to compete in the 50m fly finals on Wednesday night, the 100m fly on Thursday and the 50m free on Saturday. He is the defending world champion in each of those three remaining races.

I think there’s a quote from Vince Lombardi (famed football coach) that said, “Perfection is not attainable, but if we chase perfection, we can catch excellence (or greatness).”

I think what anyone at Dressel’s level needs to remember is that first part of the sentence. Perfection is NOT attainable. If Dressel had a goal of 46.80 100 free, and goes 47.01 or whatever he went, he’s got to realize that perhaps the 46.80 was perfection…but 47.01 was excellence/greatness. We don’t live in a world of perfection…we can live in a world of excellence if we are willing to accept that we humans are imperfect. Look, I was never at his level so what do I know, but I hope he’s… Read more »

Well said. I always tell my high level college swimmer to enjoy every meet & every race and that our love isn’t based on a good or bad time. Why do I do this? Because when your athlete has had to deal with numerous traumas, it’s about helping your athlete keep a positive perspective. It’s important to enjoy the ride.

I’d rather have my swimmer be known for being a team player who is respected by coaches and the other swimmers. After all, records will be broken, but those relationships will last a lifetime.

We gotta start prioritizing mental health in sports if we want these athletes to be able to make it long term. Mental health IS health.

Actually funny you say that because when I met him back in 2019, Caeleb said he has 1 semester left and he put school on hold for a little while.

Thank you Caeleb for your honesty about your struggles. Sports in general have glossed over athletes struggles with mental health issues for years, so it’s good to have another Olympian be honest. It’s important for parents to put the “person” first ahead of the “swimmer”, to support and always offer options. Talent is such a small part of what’s needed to succeed at this level but rather those that have managed to survive the extreme mental and physical demands they’ve chosen to endure.

After seeing some of this I can better understand now what’s been going on in general with Caeleb. And honestly it’s relatable in regards to putting pressure on yourself. I can really respect Caeleb for opening up a bit about all of this. Also with taking a break that has been the most important thing too throughout the latter half of 2021. Makes me feel no ones alone in this.

At least this dude performed in Tokyo. I don’t get how Simone Biles can just make it to Tokyo and tap out when she’s done it all before…

Swimmers are the greatest.

This is a horrible tale

Hmm, well gymnastics is a bit more dangerous than swimming…

You have no clue. There are no words for people like you.

There are, I just don’t think we can type them on SwimSwam

they beating your ass with the downvotes bro

Because Simone Biles was smart enough and self-aware enough to tap out when she realized she had the twisties. When you are doing things no one else can do in gymnastics, it requires complete concentration, If you lose focus or get nervous for just a split second and miss your spotting, or your foot is out of place, those impact forces can injure you for life, or you can land wrong and die. That’s why.

I’m wondering whether this kind of pressure, leading to a level of depression (and other forms of mental illness, such as anxiety) is particularly an issue for athletes in individual sports, such as swimming, gymnastics, and tennis (think of Simone Biles and Naomi Osaka.) Ultimately, they are alone and all the pressure is on them. The more successful, the more pressure. It’s well past time to address this comprehensively.