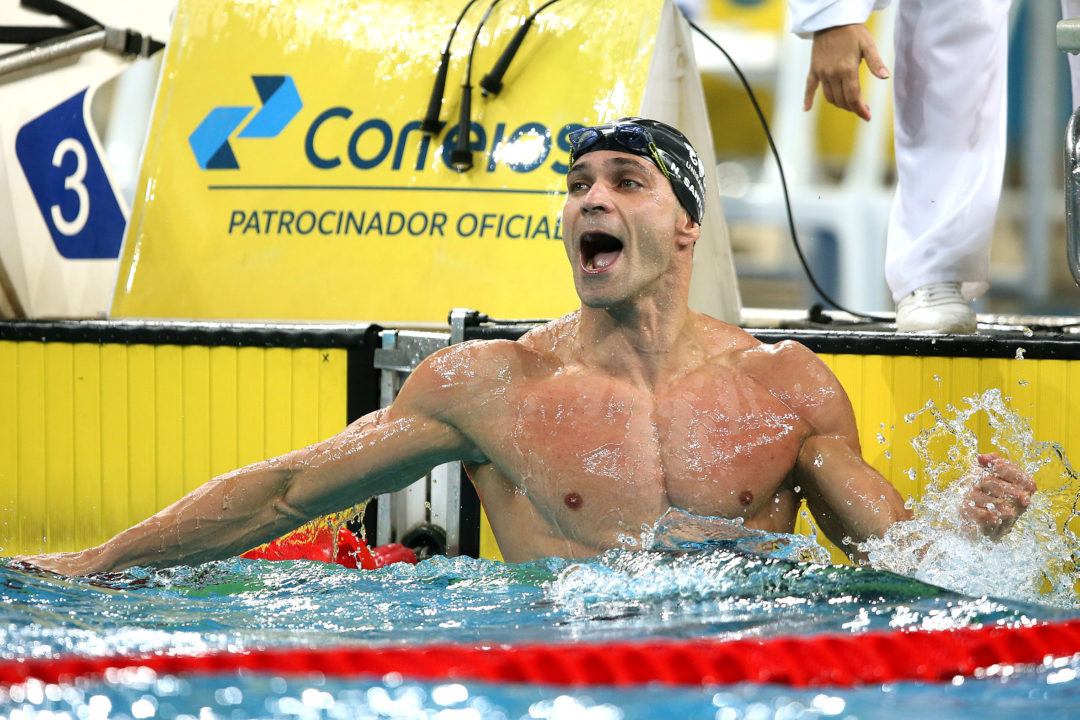 The 5-day SCM meet will feature the top swimmers in Brazil, as well as a handful of high-profile international swimmers. Stock photo via Satiro Sodré/SSPress/CBDA

The 2022 Jose Finkel Trophy is set to kick off in Recife, Brazil on Tuesday. The 5-day SCM meet will feature the top swimmers in Brazil, as well as a handful of high-profile international swimmers. Additionally, this meet will serve as Brazil’s selection meet for the SC World Championships, which will take place at the end of this year in Melbourne, Australia.

One of the highest profile swimmers in the meet is Nicholas Santos, who has found a resurgence of sorts late in his career. Now 42 years old, Santos enters this meet as the top seed in the men’s 50 fly and 100 fly, and he’s seeded 4th in the 50 free. Santos won gold in the 50 fly at the 2021 SC World Championships in Abu Dhabi last December. He’s shown no sign of slowing down since then, swimming excellently in the LCM 50 fly this spring and summer. The 42-year-old could potentially see himself on the Brazilian roster for the 2022 SC World Champs in several events. He’s the favorite in the sprint fly events, and could see himself onto the Brazilian 4×50 free relay in addition to his likely spots on the medley relay.

Caio Pumputis is another big name at the meet, coming in as a serious threat in the men’s breaststroke and IM events. Pumputis enters as the top seed in the men’s 100 breast and 200 breast, and is 5th in the 50 breast. He leads the psych sheet in the men’s 100 IM, and is 2nd in the 200 IM to Leonardo Santos.

The men’s freestyle events are stacked at this meet. Brazilian distance star Guilherme Costa is the top seed in the 800 and 1500 free. He had something of a breakthrough this summer, winning his first World Champs medal, taking 3rd in the 400 free at the LC World Champs in Budapest in June. It was a huge accomplishment for both Costa and Brazilian Swimming, which historically hasn’t been known for its distance swimmers. Costa was also 5th in the 800 free and 6th in the 1500 free, setting South American Records in both.

Also in that mix is Breno Correia, who is the #2 seed in the 200 free, #3 in the 400 free, and #7 in the 100 free. We should keep an eye on Stephan Steverink, who is fresh off an excellent performance at the World Junior Championships in Lima. Steverink won gold in the 400 free in Lima, swimming a huge new personal best of 3:48.27 in the LCM event. It may be too soon for him to stand up to Scheffer and Costa, but he could potentially make that an interesting race, along with Correia. He also swam a personal best of 1:49.02 in the LCM 200 free at World Juniors, which indicates he may be able to make a play at a relay spot on Brazil’s 4×200 free relay for SC Worlds.

Perhaps Steverink’s best opportunity at a SC World Champs roster spot comes in the distance events. He’s the #2 seed in the 800 free and 1500 free, and after strong performances at World Juniors, he could be able to make the cut.

Veteran Giovanna Diamante is one of the top-seeded women’s swimmers coming into the meet. Diamante is a South American Games and Pan American Games gold medalist, and enters this meet as the top seed women’s 100 fly, 200 fly, and 200 free. She’s also seeded 3rd in the 50 free and 5th in the 50 fly. She’s seeded low in the women’s 100 IM as well, though given her status as one of the fastest butterflier and freestylers in the meet, it stands to reason that she’ll be a contender in the event.

In the 200 free, Diamante will have a tough battle on her hands with youngster Stephanie Balduccini, who has really come into her own this year. Balduccini swam a 1:57.54 in semifinals of the LCM 200 free at World Champs this summer, which comes in just a few tenths of a second off the Brazilian Record in the event. Additionally, that time is within a second of her seed time for this meet (1:56.59), which indicates the 17-year-old should be able to blow away her seed time. Diamante is entered at 1:56.22.

After her incredible spring and summer, Balduccini should be seen as a threat in all her events. She’s also seeded 2nd in the 100 free, but was Brazil’s top LCM 100 freestyler this season, setting her up well there as well. She’s seeded 3rd in the 100 and 200 IMs, and 4th in the 400 free. With how well she did in the LCM 200 free this year, the SCM 400 free could be a great race for her.