2022 Commonwealth Games Previews: What Form Will Duncan Scott Bring to the IMs? 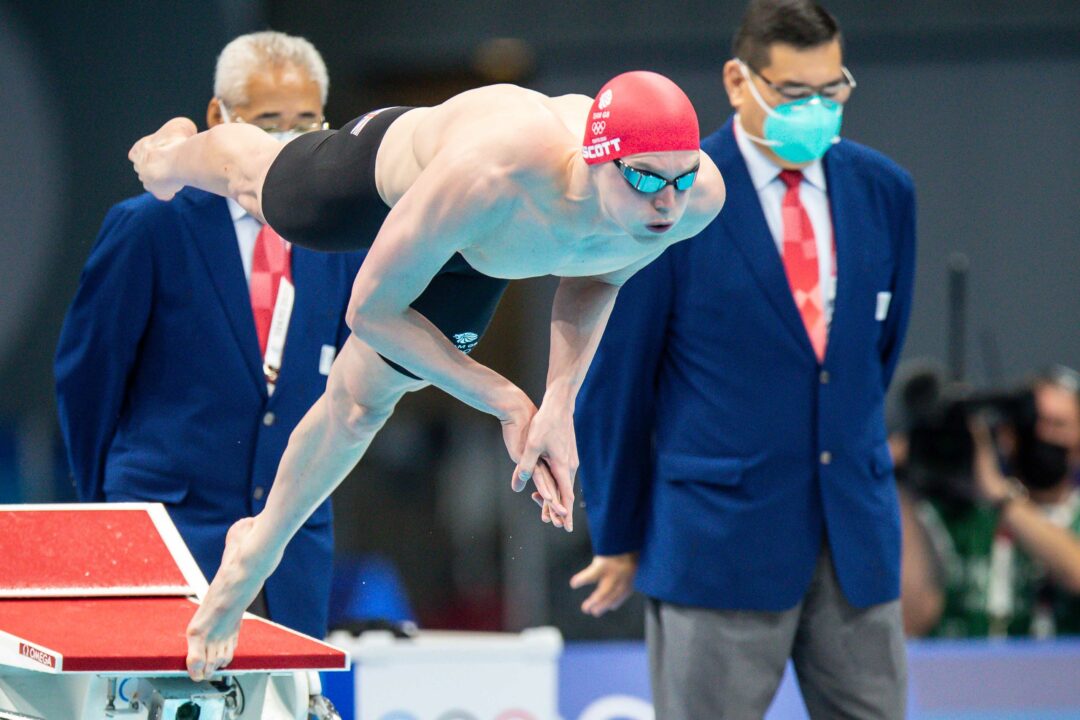 As the season's top Commonwealth performer in the men's IMs, Duncan Scott's form will be a huge determining factor for the medals at the Comm Games. Archive photo via Jack Spitser/Spitser Photography

The big question mark here (and in the 400) is Olympic silver medalist Duncan Scott. The 25-year-old looked strong at British Trials, posting 1:56.08. Then, he contracted COVID-19 two weeks before Worlds. While it originally seemed he planned to race in Budapest, he ultimately withdrew due to post-COVID training struggles. He’s raced since then, but it’s unknown what kind of form he’ll bring to Birmingham. His COVID diagnosis and subsequent training issues have cast doubt over what seemed like a lock for gold. With the men’s 200 IM falling on Day 6 of the competition, we’ll know what Scott’s form is well before we get to this event. If he’s swimming well, he could still upgrade his 2018 silver for gold.

We’ve gotten used to seeing Tom Dean and Scott go 1-2 (in either order) in the 200 free. Can they do the same in the 200 IM? Dean has been steadily improving in the 200 IM this season. He popped a personal best 1:57.18 at British Championships, then lowered that mark at Worlds with a 1:56.77 to finish fifth. Like many of the top Commonwealth athletes, this is the second of three big meets this summer, falling in between Worlds and August’s European Championships. So, it’s worth wondering how much Dean is focused on this meet, or if he’s already looking ahead to Euros. However, given the times he’s posted this season, it would be surprising if he came away without a medal.

One swimmer who is all in for Commonwealth Games is South Africa’s Matt Sates. Since turning pro this spring, the teen has been on fire, especially on the Mare Nostrum tour. Among many highlights, he set a personal best time in the 200 IM of 1:57.43. At Worlds, Sates made his first World Championship final in this event, despite coming down with an illness at South Africa’s staging camp prior to the meet’s start. Sates has been open about his focus on Commonwealth Games; if he’s recovered from his illness, not only could he drop even more time, he could be in line for a medal.

New Zealand’s Lewis Clareburt has also had to deal with illness this season, having gotten COVID-19 in the run up to Worlds. He bounced back well at Worlds, finaling in both the 200 IM and the 400 IM. In the 200, Clareburt got within a second of the lifetime best 1:57.27 he set in Tokyo, swimming 1:58.11. He has the fifth-fastest time in the Commonwealth this season, so he’ll have to do some work to medal, but it’s certainly not out of the question.

Sitting just ahead of Clareburt on the top Commonwealth times list this season is Finlay Knox. At Canadian Trials, he set a new Canadian record, hitting 1:57.50 to become the first Canadian under 1:58. He fell off that time at Worlds, adding over two seconds and failing to make it past prelims. It seemed that as a team, Canada was more focused on Worlds than some of the other big nations competing at the Commonwealth Games, so it will be interesting to see if Knox can get back down to his springtime form. If he does, he should be in the mix for a medal.

There are a trio of Aussies in this event, with Brendon Smith the fastest of the three this season. At Australian Trials, he nearly matched his personal best set in Tokyo, clocking 1:58.59. Like Knox, he was unable to repeat the swim in Budapest and didn’t qualify for semifinals. Conversely, Se-Bom Lee set a new lifetime best in Budapest, hitting 1:59.37. He’ll need another drop to enter the medal conversation, but expect him to grab a lane in the final.

Then there’s the defending champion and Commonwealth Games record holder, Mitch Larkin. Larkin hasn’t gotten close to either his Comm Games record or his lifetime best yet this season. So far, he has yet to crack the 2 minute barrier as his best is 2:01.06 from Australian Trials. He’ll need to find his form quickly if he wants to defend his Commonwealth title or even medal at all.

One constant though, is Scott holding the fastest time coming into the meet. This is a relatively new event for him but at British Championships, he blasted a British record of 4:09.18 and announced himself as a favorite for a medal in Budapest. He didn’t race at Worlds, but as his time is over a second clear of the rest of this field, he remains the favorite on paper–even with the lingering questions about his COVID recovery. One thing to keep in mind is Scott’s busy schedule. If he swims all the events he’s entered in, he’ll pull a tough 200 free/400 IM double on Day 2 of the meet. That will certainly answer if he’s on form or not in Birmingham.

Clareburt and Smith are both better at the 400 IM, so expect them to be in the hunt for a medal. Smith is the Tokyo bronze medalist and has the fastest lifetime best in the field after Scott. His season best is 4:11.36 and given that the Australians seem to have focused their attention on Commonwealth Games, he could get a lot closer to his best here. Clareburt beat Smith in Budapest, claiming fourth in 4:10.98. Like the 200 IM, that was a strong showing for the Kiwi given that he missed training because of COVID. His lifetime best is just behind Smith with 4:09.49, so we could see a battle between these two. Clareburt won bronze at the 2018 Commonwealth Games in this event, and is sure to be eager to get back on the podium.

Looking to get in on the action will be Sates. The South African set a lifetime best in this IM distance this season too, hitting 4:11.58 at the Barcelona stop of Mare Nostrum. Much of what we said about Sates in the 200 IM holds true here–he’s focused on the Commonwealth Games, so could be in line for another drop. His best is over two seconds off the trio of 4:09s from Scott, Smith, and Clareburt but isn’t too far off what Smith and Clareburt have done so far this season. The medals will almost certainly come from these four men. One thing to keep an eye on with Sates is that like Scott, he’s facing the 200 free/400 IM double.

England’s Brodie Williams has been 4:13.89 this season, about a second off his personal best 4:12.95. He’s drifting in the middle of the entry list–off the times of the four favorites but ahead of the next fastest men. That leaves him in an interesting position; he likely won’t break up the race happening in front of him, he should certainly be a factor in the final.

The other two names to keep an eye on are Australia’s Lee and Kieren Pollard. They’ve been in one hundredth off each other this season, Lee just ahead in 4:14.77. For Pollard, his 4:14.78 was a new personal best, a promising sign for him as he looks to secure a lane in the final. Lee’s mark is just off his best 4:14.16, but given his improvement in the 200 this season, he could be set for a drop here as well.

– strengthening his backstroke is a natural extension of trying to improve in the IM’s. Let’s be honest, the IM’s now look much deeper than they did in 2019, which was probably when Duncan started swimming then more. Considering he’s one of 4/5 candidates with 1:54 (or better) 200IM potential by Paris, it makes sense to train more backstroke anyways.

– the only thing he’s really missing is Olympic gold, which could come from the 200free/IM, but it could also come in the 200back considering that it’s a much weaker field internationally (esp… Read more »

This seems like a bit of an odd prediction. It’s certainly possible. But Scott has no LCM 200 back time on record. His 100 back PB is a 55.9 from 2017. He has never shown any interest in backstroke. It just seems odd to predict he might enter the 200 back when his country already has a strong 200 back contender.

I also wouldn’t say it’s a weak field. Rylov swam and the 6th and 8th fastest times ever last year.

And you suggestion that he could swim the back leg of the medley relay seems odd as well. If he’s going to focus on the 200 back, what makes you think he will have a superior 100 back… Read more »

I didnt realize how deep the commonwealth is in the IMs

Scott will show up big

I hope so and he’s focusing on the com races but just find it off he’s not listed as going to euros which makes me wonder what form he’s in as a lot of others are already listed to go.

where did you find he’s not going to Euros?

not listed on the british swimming website in the team currently. They said people could be added after com games though.

There’s no way he’s not selected. He must have turned his place down.

Finlay Knox had posted about being sick prior to worlds which impacted his performance. I would guess he would be back on form for Comms