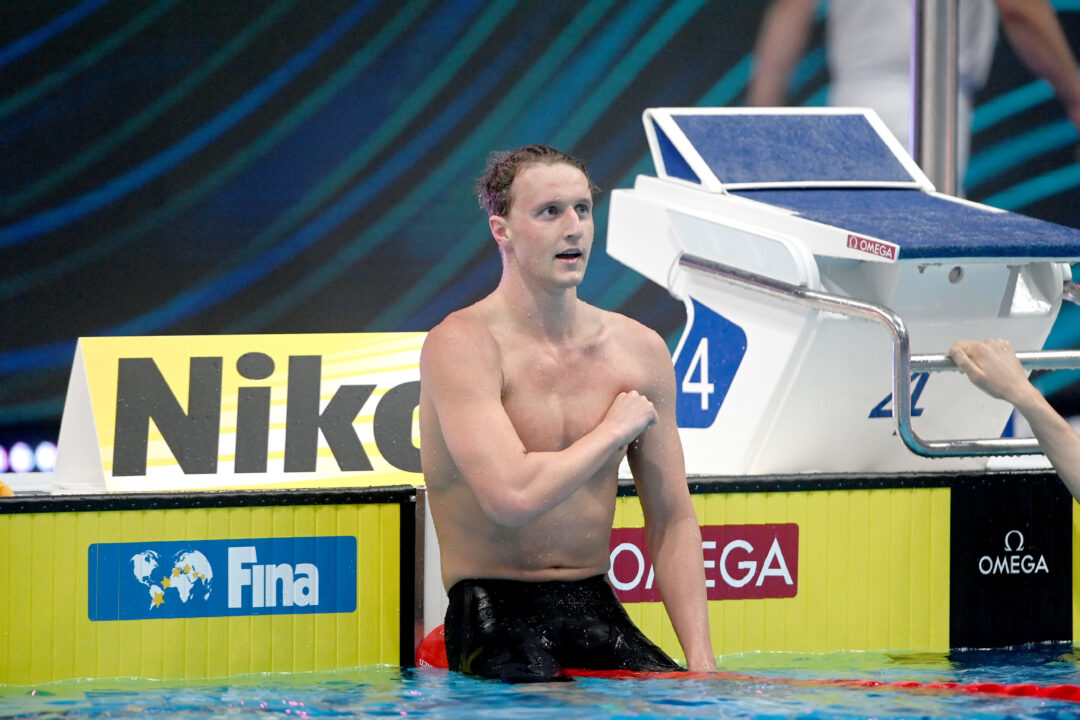 After winning World Championship gold in the 400 free in June, Australia's Elijah Winnington is poised to add the Commonwealth title to his resume. Archive photo via Delly Carr, Swimming Australia

The men’s distance freestyle events at the Commonwealth Games have historically been dominated by the Australians.

For the three editions of the Games after that, the Aussies didn’t win at all, as Scotland’s David Carry (400 free) and Wales’ David Davies (1500 free) won gold on Australian soil in Melbourne in 2006 before Canadian Ryan Cochrane swept both events consecutively in 2010 and 2014.

Australia returned to the top of the podium four years ago on the Gold Coast, with wins coming from Mack Horton and Jack McLoughlin, and now the nation Down Under appears on track to continue its winning ways in the 400, while they’ll have their work cut out for them if they are to remain at the top in the 1500.

After joining legends Kieren Perkins, Ian Thorpe and Grant Hackett and becoming the fourth Australian man to win the 400 freestyle at the World Championships in June, Elijah Winnington has a clear path to add his name to the long list of Aussie winners in the event at the Commonwealth Games.

After coming in as the favorite to win the event at the Tokyo Olympic Games and falling short, Winnington bounced back in a big way in Budapest, using a dynamite final 100 meters to pull away from Germany’s Lukas Märtens and win a decisive gold medal in a time of 3:41.22.

Winnington was the only swimmer from a Commonwealth country in the World Championship final of the 400 free, with countryman Mack Horton the next-highest finisher after placing ninth in 3:46.57.

Horton and the third Australian entrant in Birmingham, Samuel Short, were both significantly faster than Horton’s time from Budapest at the Aussie World Trials, clocking respective times of 3:44.06 and 3:44.34.

Horton is the defending Commonwealth champion, and Short is on the come-up, having made his major championship debut in Budapest in the 800 and 1500 free. The 18-year-old Short missed the final in both events at Worlds, but the 400 is easily his best out of the three, it just happens that of the six men quicker than him this year, two are from his country.

On paper, it would take something drastic for this not to be the first Australian sweep in the men’s 400 free since 1998, with the main battle slated to be Horton versus Short for the silver medal.

Behind them, the race for spots is seemingly wide open.

In 2018, it was England’s James Guy who joined Horton and Jack McLoughlin on the podium, but the 400 free is an event he has drifted away from in recent years.

The top British swimmer in this event at last month’s World Championships was Daniel Jervis, who gets better as the distance goes up, but is still strong in the 400 after clocking a best time of 3:46.44 earlier this year.

Jervis, who represents Wales, will be a frontrunner in the 1500 in Birmingham, but is the leading candidate to be the fastest non-Australian in the 400 free and potentially make his way onto the podium if someone slips up.

Another name to keep an eye on in this event is South African Matt Sates, who is the World Junior Record holder in the SCM 400 free (3:37.92) and the 2022 NCAA champion in the 500-yard free, but has yet to fully realize his potential in the long course event.

With a best of 3:49.27, set on the Mare Nostrum Tour in May, Sates should be able to lop a few seconds off of that if shows up in Birmingham in optimal form. In late May, he told SwimSwam that he was all-in on the Commonwealth Games this year.

On paper, the 1500 free should be a runaway victory for Daniel Jervis, as he’s one of only two swimmers from a Commonwealth country under the 15-minute barrier in 2022.

The 26-year-old was the silver medalist four years ago on the Gold Coast, and has been sub-15:00 16 different times over the last eight years, most recently clocking 14:48.86 to place seventh at the World Championships in Budapest.

The 21-year-old is coming into the Games on a high, having set new national records in the 400, 800 and 1500 free this year, and should be able to make his way onto the podium in the mile.

The up-and-coming Samuel Short comes in ranked third in the 1500, over 17 seconds back of Jervis this year with his showing of 15:05.55 from the Australian Championships in late May.

Short has been sub-15 before, clocking a best of 14:57.22 at the 2021 Aussie Olympic Trials, cementing his place as a favorite to get on the podium.

England’s Toby Robinson and Luke Turley, Australia’s Kieren Pollard and Canada’s Eric Brown have all been in between 15:12 and 15:18 this year, putting them in the battle to get on the podium as well.

Comm Games could be one taper too many for Horton so I could see him missing the podium in the 400.

Agree with Jervis winning 1500, not convinced about Short. May medal but think Wiffen and/or one of the English will make things hard for him.

What about Dan Wiffen Northern Ireland

Updated, thanks! (I initially failed to include the Irish athletes)

You updated to include Wiffen, but that now means that there are two swimmers under 15

why did he represent Ireland at Worlds and not GB?

Many Irish sporting teams, particularly Olympic sports but also including rugby, operate on an All-Ireland (both Republic and Northern) basis which gives Northern Irish competitors a choice of options. For many, the selection for Ireland is an easier road however the GBR infrastructure is far greater.

Whilst commonwombat is correct in writing that many sports in Ireland (the majority), are organsed on an all-Ireland basis (football would be an exception) this does have implications for ‘choice’. Commonwombat is suggesting that a sportsperson can make a rational “choice of options” if they want, however, in reality this is not true. All young promising swimmers in N.I are brought up representing Ireland from junior level onwards and this ‘ties’ them to Ireland. If they subsequently decide to switch to GB for whatever reason (political choice/better infrastructure or whatever), they have to go through the same process as any other international swimmer would have to go through if switching national alleigance and therefore it is not worth the hassle… Read more »

I thank you for the further clarification as my explanation was indeed only meant to be a generalisation.