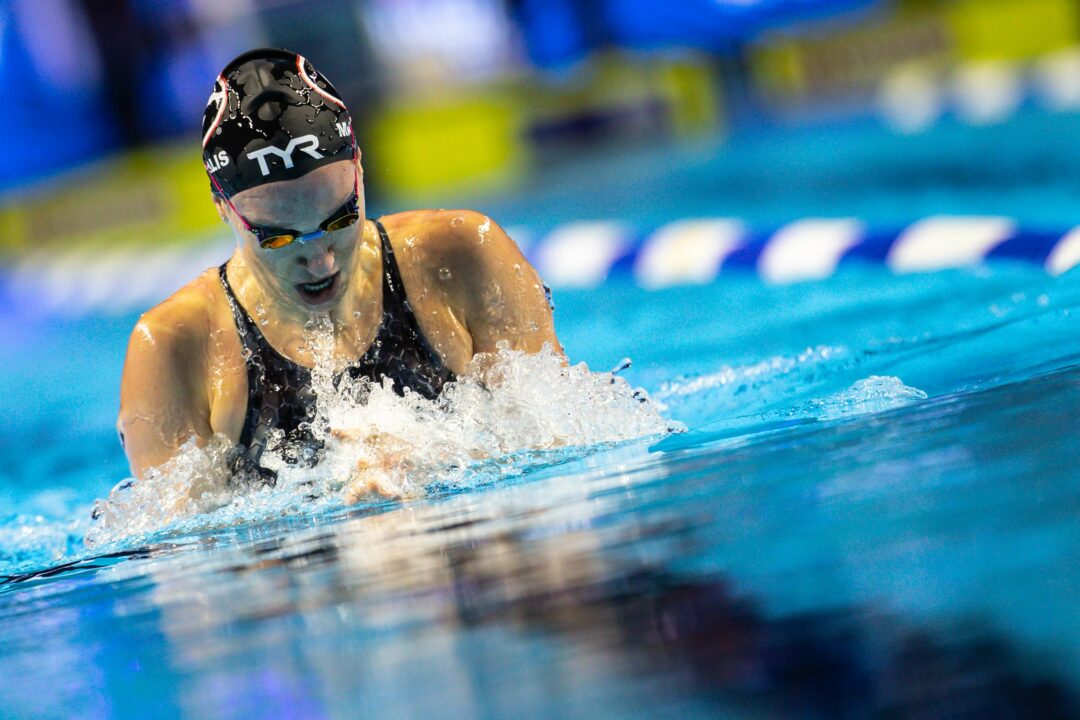 The theme of Tuesday morning will be event doubles - who is taking on two events and who scratched an event or two to focus in on a primary swim. Archive photo via Jack Spitser/Spitser Photography

The theme of Tuesday morning will be event doubles – who is taking on two events and who scratched an event or two to focus in on a primary swim.

Katie Ledecky is the headliner, with a likely 200 free/1500 free double this morning. She’s the runaway top seed in both races. Ledecky would have semifinals of the 200 free in tonight’s session, then the final of both races in another double on Wednesday night.

Alternatively, a lot of other top names who were set up for doubles scratched one event or the other. Madisyn Cox was a top-8 seed in both the 200 free (6th) and 200 IM (1st), but scratched the 200 free. Melanie Margalis was entered in the same combo, but also bowed out of the 200 free. Leah Smith would have matched Ledecky’s double between the 200 free and 1500 free, but she’s dropped the latter.

We can definitively say we won’t see any doubles on the men’s side this morning. That’s because there’s just one event. Luca Urlando leads the men’s 200 fly heats. This will be the first Olympic Games since 1996 that won’t feature Michael Phelps on Team USA’s 200 fly roster. That leaves a much more wide-open field. The 19-year-old Urlando will look to fight off Louisville alumnus Zach Harting along with Cal’s Trenton Julian. Cal veteran Tom Shields, who joined Phelps on the Olympic team in this event in 2016, should also compete as the 6th seed. He’s 29 years old and the oldest man in the field this morning.

In the 200 IM, keep an eye on Kathleen Baker, the former world-record-holding backstroker. She’s been hampered by a foot injury this year, but the 200 IM might be her best chance to make a second Olympic team after she missed the 100 back final in last night’s semis.

In the women’s 1500, we’ll get many of the same competitors from last night’s 400 free final. That includes the standout Ledecky, along with Smith, Haley Anderson and Sierra Schmidt. This will be the first 1500 free in Olympic history as a new event this year. The event will be swum prelims/finals, with heats this morning and the final tomorrow night.

Simone DFS 200 Free. Kinda disappointed she didn’t at least throw a prelims swim in there to see what she could go.

It seemed over for Lotche before it began based on the past year and this new generation, who are amazing.

It has been over since he exited that Rio gas station bathroom. Period

Off-topic, but Sierra Schmidt’s dance routine before the 400 free final was insane.

Yo she must’ve been choreographing that during the pandemic because it was strong.

Haley Anderson is such an under the radar stud. 3 time Olympian, 29 years old, swims the toughest events, goes a best time yesterday in the 400 free, has the mile today, always seems so relaxed, etc. I could go on and on. It’s been fun following her journey over the years!

It’d be cool if she gives herself a shot at doing what Mellouli did in London – medal in the pool and in the lake.

A lot of people are triggered by Michael Andrew swimming the finals of the 100 back. I think you are all overestimating how much energy one extra 100 takes. He doesn’t have any other races today. By the logic of the swim swam commenters every single person who has races later in the meet should scratch all of their finals appearances if they don’t have a realistic shot at being top two.

I’m still amazed he even made the final.

Most talented swimmer in a generation?

If only Caeleb Dressel had his physical ability

It depends how you define generation? Of the male swimmers in their 20s he’s probably top 5 for overall ability imo. Being elite in every stroke is a big deal for me when ranking swimmers. Dressel isn’t a great LCM breast, back or IM. I’d still put Dressel over MA of course but it makes it closer than it would be that MA literally won every 50 at US Nationals. That kind of stuff is insane.

You try doing all those races on a Chipoltle keto diet. At some point, the body needs some actual fuel.

I feel that these guys just want to race. And if it doesn’t create a tough double, an extra race can help swimmers calm their nerves and really get them in the racing mental state. Totally agree with you, Billy, especially for MA who’s used to the race-pace method.

New bold prediction!
In Tokyo the US prelims team in the mixed medley made up of Murphy, King, Huske, Held will break the world record, and then in finals a team of Smith, Andrew, Dressel, Manuel will win gold but not re-break the record. Don’t @ me 🤷🏼‍♂️

No way they lead a woman on backstroke.

200 IM best chance for baker? No way with Margalis and Walsh.

Agreed. Douglass is in there too after her 100 fly last night. I think her best shot is 200 back.

Bacon looked decent in the 100 back, she’s gonna make it hard for Baker to qualify in the 200. Also Rhyan White is gonna be in the mix

She and her coach have said/are saying what they have to, but it’s clearly affecting her. Wish her the best.

Non zero chance they go 1-2. Douglas is swimming very well. Remember – she hasn’t swum breaststroke since the fall NCAA meet, but in that moment she nearly broke the 200br AR. Or it could be Cox & Margalis. It will be a real tight race tomorrow nite, assuming all the players advance.

Never said 1-2, however, I feel Walsh will be a big surprise!

Agree, unfortunately she would need to be 100% to make any of the events and she’s simply not there.

Sophie Lindner will be up there too in the 200 back. Had a very strong back half in the 100 last night.