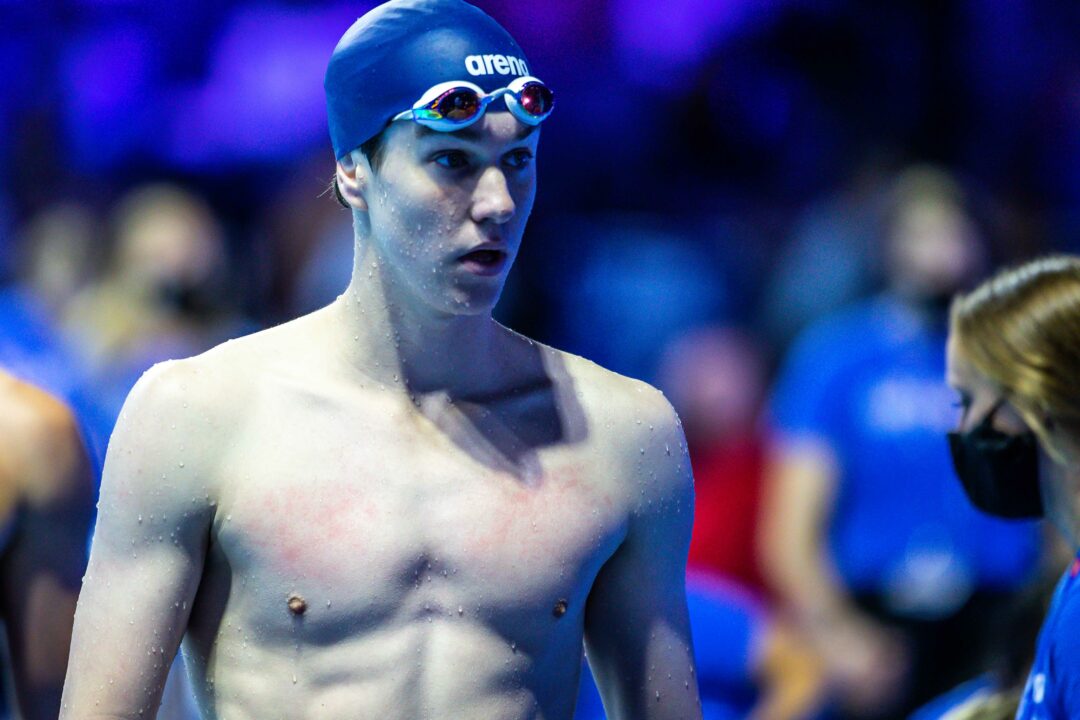 Jake Mitchell finished in 2nd place in the men's 400 free final with a time of 3:48.17, about 1.4 seconds off the FINA A cut needed to make the Olympic team.

There will be two men’s 400 free time trials during the 2021 U.S. Olympic Trials Wave II, USA Swimming announced Monday night. The first is scheduled for Tuesday night and the second will take place on Friday night. Both will start after the finals session.

Kieran Smith was the only swimmer to get under the FINA A cut in the men’s 400 free final on Sunday night. We broke down what that means and the rules regarding the A cut (Olympic Qualifying Standard) versus the B cut (Olympic Selection Time) here.

Since the only other U.S. swimmer who has achieved the A cut during the qualification period, Zane Grothe, placed 11th in the event, the time trial will be between swimmers who finished 2nd through 10th place. They won’t have to beat Grothe’s time (he went a 3:45.78 at the 2019 World Championships), they only have to attain the A cut (3:46.78) since they have already placed higher than him at Trials.

2nd place finisher Jake Mitchell is excited about the time trial. “I know as the meet goes on I normally feel a lot better. Especially [after] I got my first race jitters out … There’s gonna be a lot less nerves, I know that I’m swimming fast,” he told reporters on Monday after there were some plans in motion for the time trials. Mitchell finished with a time of 3:48.17.

Ross Dant, who placed 3rd, also has a solid chance to break the A cut. He touched the wall at 3:48.30, right with Mitchell.

Not only will 2nd through 10th place be eligible for those two time trials, USA Swimming stated that “all athletes who finished 2nd through 10th in the men’s 400m Free will have until June 27 to achieve an A time (at a FINA approved meet) and be considered for nomination to the Olympic team.”

There are a few FINA approved meets before that time: a meet in Mission Viejo June 26-27, a meet in the Bahamas June 24, and technically the Sette Colli Trophy in Rome.

USA Swimming clarified that 2nd through 10th place finishers in the 400 free can also time trial the event on their own any day during the meet. “If more than one athlete makes the FINA A time standard in Omaha, they will be ranked in finish order, based on the June 13 results,” they said.

I’d love to see them have someone else hop in and swim the first 200 of the race as a rabbit the way they do in track meets. Talk to Mitchell and see what he thinks he needs to go out in for the first 200 to get the standard, and get a 100/200 guy who is confident he can hit that time to volunteer to take it out and help Mitchell along.

They do this is track all the time. I don’t know why we don’t do it.

If ANYTHING, this is not unfair to Grothe

How is that unfair to Grothe? He didn’t place 1st or 2nd. With your logic, we shouldn’t have Olympic trials, just rank swimmers by their best QTs.

I mean I don’t see why they provided a time trial. The final WAS the time trial. So glad for Mitchell though, that was a great swim

No no that can’t be right.

Bobby finke should hop in for fun, or to pace the others

I do wish they would make it open to other swimmers. Some of the folks in the 400IM Final might have a shot at this. Also does anyone else want to see Katie Ledecky get in on this time trial 😃

Any of the 4IM swimmers can do a 4Free but even if they go 3:39 they aren’t going to Tokyo becuase they didn’t swim the event at trials.