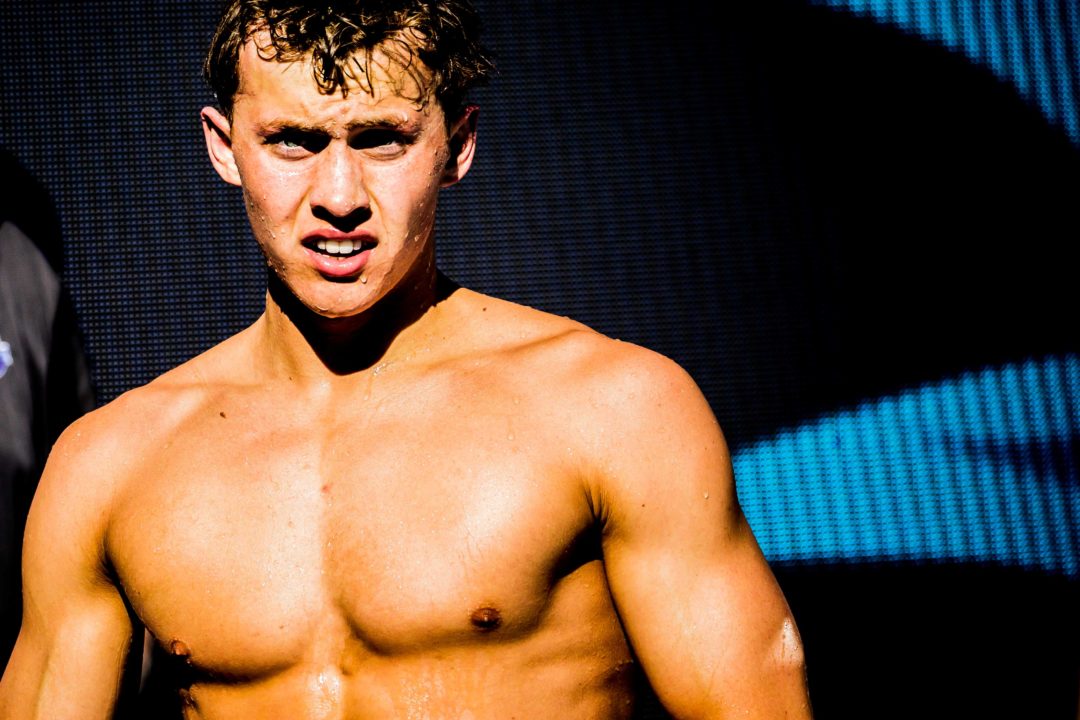 After taking silver in Gwangju, Jay Litherland comes in as the top 400 IM contender. Can an eager 19-year-old Carson Foster knock out Chase Kalisz in Omaha? Stock photo via Jack Spitser/Spitser Photography

At the 2016 U.S. Olympic Trials, 22-year-old NBAC protegeé Chase Kalisz stole the show easily punching his ticket to his first Olympics at 4:09.54. Behind Kalisz, 31-year-old defending Olympic champion Ryan Lochte got run down by 20-year-old UGA Bulldog Jay Litherland for the second spot on the Olympic team. At the Games, Kalisz settled for a silver medal at 4:06.75 behind Japan’s Kosuke Hagino. Then, at the 2017 World Championships and 2018 Pan Pacific Championships, Kalisz sealed back-to-back event titles on major international stages with efforts of 4:05.90 and 4:07.95.

But Kalisz has cooled down some since that dominant run. At the 2019 championships in Gwangju, Kalisz placed 10th in prelims and failed to advance into the final and defend his 2017 title. After placing third in prelims, all eyes were on Litherland to give Team USA another IM World medal. With his best finishing efforts, Litherland took a tight runner-up finish behind Japan’s Daiya Seto, 4:08.95 to 4:09.22.

Even as Litherland overtook Kalisz as the top-finishing American on the international stage, up-and-coming talents were rising in domestic competition.

Shortly following 2019 Worlds, 17-year-old Carson Foster had his senior national breakout at that year’s US National meet, leading the men’s 400 IM final heading into the breaststroke. During the freestyle leg, Florida distance ace Bobby Finke propelled towards Foster, catching him under the flags to nab the national title at 4:13.15. Foster settled for second with a then-World junior record of 4:13.39. Texas Longhorn to-be Jake Foster placed third behind brother C. Foster and Finke at 4:15.03 in a tight race ahead of rising Florida sophomore Kieran Smith (4:15.17) and rising Cal junior Sean Grieshop (4:15.50). Meanwhile, Charlie Swanson put up the second-fastest American time of 4:11.46 to win the 2019 Pan Am title in Lima.

Entering the 2019-2020 season, Foster and Finke had solidified themselves as heavyweight matches against Rio Olympic event representatives Kalisz and Litherland. At the 2019 U.S. Open in Atlanta, Kalisz swam beside fly/back specialist Foster during the 400 IM championship final, putting himself in position to take over the lead heading into his best stroke. Following the breaststroke, Kalisz had the 3+ second lead over Foster, sealing the U.S. Open title at 4:13.07. Foster settled for second place at 4:14.76, almost four seconds faster than third-place finisher Litherland (4:18.58). Finishing in fourth place was Lochte at 4:19.72, holding off the most recent U.S. national champion, Finke (4:20.84).

One year and a pandemic later, the world hit the reset button entered Olympic year 2.0 in preparations for the Tokyo 2021. During the first-ever virtual U.S. Open meet across the country, now-Texas freshman C. Foster put up the top time of 4:16.51, kick-starting his Olympic qualification potential. Florida junior Finke, who beat C. Foster for the 2019 national title, picked up a runner-up finish at 4:18.08.

At the first meet of the 2021 Pro Swim Series, Kalisz put up his first LCM time of the season at 4:17.26, momentarily ranking second behind C. Foster in the nation. Fast forward PSS Mission Viejo, former world junior record-holder Grieshop then swam the top US time this season at 4:16.14.

Looking at the potential Trials finals from a bird’s eye view, C. Foster will most likely be in the lead pack during the fly/back portion of the race. Kalisz has the strongest breaststroke of the entire field, yet has been spotted with the front-half lead pack in competitive finals. Meanwhile, Litherland’s lethal freestyle has earned him his first Olympic berth and World silver medal. Grieshop and Finke have equally strong freestyle legs while J. Foster and Swanson are known breaststrokers.

Sanders and Vargas both are part of Florida’s top-tier distance training program, yet Smith is the No. 1 American in the 400 free this season. At the same time, fellow Gator Finke is the No. 1 seed in the 800/1500 free on the predicted Wave II psych sheets and the No. 4 seed in the 400 free. The men’s 400 free and 400 IM finals fall in the same session, and are only separated by the women’s 100 fly semi-finals, leaving Smith and Finke with some potential finals decisions.

The outcome of this race could very well take many different paths. One outcome is resembling the finish at the 2012 U.S. Olympic Trials final between Michael Phelps, Ryan Lochte, and Tyler Clary. During the race, the trio were clearly neck-and-neck through the front-half of the race. However, Phelps’ and Lochte’s massive IM racing experience gave them the advantage over fly/backer Clary. At the finish, ’04 and ’08 Olympic representatives Phelps and Lochte sealed their 3rd 1-2 finish at Trials. Despite this, Clary was able to earn his first Olympic berth in two events: 200 fly and 200 back, where he won Olympic gold.

C. Foster could very well be in the same position as Clary against veterans Kalisz and Litherland. While Litherland’s desperation allowed him to surge past Lochte in 2016, C. Foster will have to switch on a different gear on the freestyle leg if he were to break up Kalisz/Litherland.

Not sure when this article was written, but why wasn’t Carson’s 4:11 in the rankings and article? That is a huge difference and at Trials, every little difference is huge!

….because this article was written (and published) before his 4:11.

It’s right up there at the top, the date it was written.

So does Carson’s 4:11 change any minds here?

Not even a mention for Gunnar bentz? He was 4th at trials in 2016. I can understand not talking about him as a contender, but not even a mention of him? Personally I think, AT LEAST, he could final

My hot take/prediction is that Foster gets top placement, with Litherland just narrowly running Chase down and out touching him at the finish.

So Chase then puts more effort into the 200 IM race and takes the top spot there. The failing to qualify his best event (400 IM) pushing him to greater heights

Chase not making 4IM is a bold prediction

Carson’s SC 400IM has improved 5 seconds since he hit the LC PB. Strong chance he’s under 4:10 and he’s better in the big pool

Litherland and Grieshop are both underrated studs in this event

Regardless of who gets the berth, it’s just very exciting to see a U.S. Olympic Trials event preview in print.

We’ve waited such a long time for this!

Of course Wave 2 is going to be fast and has all the big meaning for the team but if you look at how tight the seeding is for the Wave 1 group there will be some great racing there and those athletes are still some of the top in the game, many likely still up and coming so despite wishing it was one big event I am really looking forward to watching both waves and really happy it’s happening. It has seemed like it was so far away for so long….

i hope litherland gets the spot !!!