2021 U.S. Olympic Trials: Dressel and the Defenders of the 400 Freestyle Relay 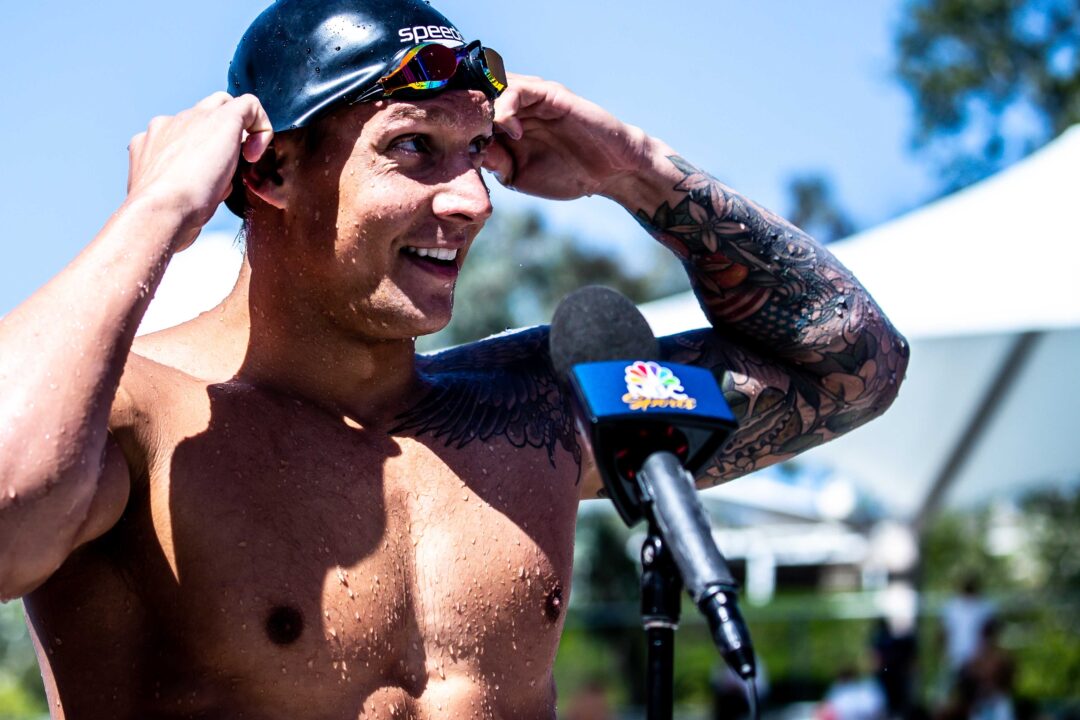 The men's 100 freestyle has become one of the most stacked events for Team USA. In 2019 alone, six American men dipped under the 48-second barrier. Archive photo via Jack Spitser/Spitser Photography

If Team USA’s 4 fastest men from 2019 replicated or improved upon their 2019 flat-start results, the United States would dip under 3:10 in the 400 freestyle relay in Tokyo. The 2008 World Record might be a little out of reach still, but a sub-3:10 performance in the 400 free relay would almost guarantee a gold medal in Tokyo. Furthermore, the United States has a very real chance of getting two men on the podium in the individual 100 freestyle–once they make it through the gauntlet that is Olympic Trials.

Dressel is the American Record holder in all three versions of the race and the two-time defending LCM World Champion. In 2019, Dressel blasted a 46.96 to win gold in Gwangju and become the only man to swim sub-47 from a flat start in a textile suit. There’s no doubt that Dressel will be pushed by the rest of the field in this race as he likely won’t be fully rested–a hallmark of Gregg Troy’s training. Even so, Dressel is the man to beat in Omaha. Will he produce a World Record at Trials? Probably not. A U.S. Open Record? Mel thinks so.

And if Dressel does slip under the US Open Record, it is Ryan Held‘s name he will be taking off the board. Speaking of, Held is our top pick to place 2nd in Omaha and earn the right to race the 100 free individually in Tokyo. In 2019, Held swam a 47.39 at US Nationals, a time that would have won bronze at the World Championships in South Korea the week prior behind only Dressel and Australia’s Kyle Chalmers. Held has kept his momentum high in 2021, and after placing 3rd in the 100 freestyle in 2016, getting an individual berth in the 100 free this year makes sense.

Indiana post-grad Zach Apple has emerged as a major player on American relays since 2017 and has been 47.69 from a flat start. At the 2019 FINA World Champs, Apple blasted a 46.86 on the 400 free relay. Apple is also a great 200 freestyler, meaning he has closing speed in addition to his front-end velocity. This is a trait he shares with fellow IU post-grad Blake Pieroni.

Pieroni placed 4th in the 100 free at the 2019 World Championships, though he took home gold at the 2018 SCM World Championships in the 200 freestyle, his signature short course race. Pieroni, Apple, and Held are all likely to focus exclusively on the 50, 100, and 200 freestyles in Omaha. Should any of them place top-6 in the 200 freestyle and punch their tickets to Tokyo early, the 100 free could be a breeze. Well, relatively speaking.

2012 Olympic gold medalist Nathan Adrian is still one of the top American performers in the 100 freestyle. Adrian has beaten testicular cancer and become a father since the Rio Olympics, where he placed 3rd in the 100 free. Adrian is a racer and is an expert at getting his hand on the wall before his competitors. While Adrian has been eclipsed by Dressel as the USA’s top male sprinter, he still gets the better of Dressel now and then, and has been as fast at 48.74 in 2021. After everything else he has overcome, Adrian only has to place 6th or better in Omaha to secure himself a spot on his fourth Olympic team.

Next up are two Austin-based athletes: Dean Farris and Maxime Rooney.

Drew Kibler and Jack Conger, two more Texas all-stars, will also be in contention for a top-6 finish in the 100 free. Conger is a 2016 Olympian via the 800 free relay and has a best time of 48.47 from 2019 Summer Nationals. The big question for Conger is whether he’s going to prioritize the 200 fly, where he finished 5th at Worlds in 2017. Now 26, Conger has focused a little more on the sprints later in his career, but that focus will be tested by the Trials scheduled, which has the 100 free semifinal just two events before the 200 fly final.

Kibler, meanwhile, has been 49.28 on three separate occasions, including just recently at the 2021 Longhorn Invite. His best yards time from the 2021 NCAA Championships is 41.45, which he compliments with a 1:30.39 in the 200 yard freestyle, both promising signs for his 100 in long course.

Middle-distance star Kieran Smith has a lot of momentum going into Trials, though his best shot of making the Olympic team will be in the 200 free. Smith is the American Record holder in the 500 yard freestyle and the only man to break 1:30 in the 200 yard freestyle more than once. He will need more speed to make the top-8 in the 100, though his short course times might suggest he already has it and just needs a break from Florida’s notorious heavy training regimen for the speed to show.

Andrew Seliskar burst onto the 2018 Pan Pacs team with a national championship in the 200 freestyle, later winning silver in Tokyo behind Haas. Seliskar is one of the most versatile swimmers on the National Team and will likely also swim the 200 IM at Olympic Trials, with semifinals coming just two events after this 100 free final.

Ryan Hoffer has been one of Cal’s most valuable swimmers over the past four years and captured three individual NCAA titles in 2021. Hoffer has yet to really break through in long course, but he’s one we’ll keep on our radar. Another college standout is LSU’s Brooks Curry, who went 41.7 in yards this year. Curry was 48.4 in meters at meet back in March, though that time doesn’t appear in USA Swimming’s database. More recently, Curry went 49.0 in a local meet at LSU and should be in line for some big drops this summer.

Justin Ress and Michael Chadwick have both been 49-low this season, and Chadwick was a member of both the 2017 and 2019 World Championships team in the 400 free relay. Both could be in the mix for an Olympic berth as one of the top-6 finishers in the 100 free.

Tate Jackson (47.88), Robert Howard (48.37), and Daniel Krueger (48.55) are three more that put up big swims at the 2019 U.S. National Championships to throw their hats in the ring for the 100 free. Jackson will have recently finished a 1-month suspension from competition, given to him by USADA for testing positive for THC from a sample collected on March 4th at the Pro Swim Series meet in San Antonio. Nonetheless, Jackson’s training should not have been majorly impacted. Krueger, meanwhile, is coming off a successful NCAA season that included a tie for 2nd in the 100 free at the NCAA Championships, though he was faster at the Big 12 Championships, where he posted a 41.26.

Dark Horse: Adam Chaney. (Lifetime best: 49.27. Season best: 50.15.) Chaney had a remarkable NCAA freshman season at the University of Florida. Chaney placed 3rd in the 50 free at NCAAs, swam the lead-off legs for the Gators’ 200 and 400 medley relays, which both placed 2nd, and swam backstroke on Florida’s 2nd and 3rd-place 200 and 400 medley relays. Chaney produced a 41.74 at the leading off Florida’s 400 freestyle relay, which is on-par with most of our other top-12 picks’ yards times. Chaney’s best time of 49.27 was notched at the 2019 FINA World Junior Championships, which gives him crucial racing experience at the international level.

What about Bowe Becker? He hasn’t fully proved himself long course, but his 40.83 (SCY) is saying something.

He definitely looked better in Indy, 49.6 is a better swim. I think he’ll be a semi-finalist. I don’t think he’ll make the final.

I think he’s got a better chance to final in the 50. If he can lose the breath, I think he’ll do it.

Here’s hoping he surprises you then!

I know this is a weird question and really off topic, but I’m struggling to find the information online. Does anyone happen to know if swimming a relay out of order at a California high school section meet that follows NFHS rules is against the rules?

So long as the leadoff leg is right (can be changed up until athletes are called to the blocks), the order of the remaining swimmers doesn’t matter.

For 2021-2022, the four members of the relay must be declared, but you don’t actually have to declare a leadoff leg.

In other words: no, no penalty for swimming out of order, except the leadoff leg, if the coach so chooses, and they don’t have to so choose if they don’t care about the swimmer getting credit for their swim.

Thank you very much Braden for the response, it is greatly appreciated. I was just worried about my school’s relay but it turns out it was for nothing. I think the 2018 Pan Pacs 400 free relay DQ has made paranoid, haha. 🙂

I Hope Maxime Rooney will prove everyone wrong.

I hate to say it as Adrian is such an inspiring person, but if he makes it to top 4, US 4×1 relay would be in some trouble. US needs at least four 47 swimmers to beat Russians. I can’t see Adrian breaking 48 this year.

Right. This is the most compelling 400 free relay race since 2009. People here keep underestimating the Kolesnikov/Minakov/Grinev/Morozov team, even though it’s the best squad assembled since Leveaux/Gilot/Bousquet/Bernard. Team USA has to be Dressel+Held+Apple+Pieroni or Rooney.

I think Russia should pick 4 guys out of Zhilkin, Girev, Vekovishchev, Rylov, and Shchegolev and put them on the prelims for the 400 free relay so that in the end 8 guys get gold medals.

Russians get the WR.

4
-38
Reply
He said what?
Reply to  Notanyswimmer

Where’d you get the numbers from, Comrade?

7
0
Reply
ERVINFORTHEWIN
Reply to  He said what?

from a false dream

It was Zach Apple’s 46.86 on the third leg that gave the USA the lead over Russia going into the anchor leg at 2019 worlds. It was the fastest split of all swimmers.

Kolsenikov: my powers have doubled since the last time we met.

26
-3
Reply
He said what?
Reply to  There's no doubt that he's tightening up

Zapple: Mine have tripled.

With the current depth of the 100 free it makes zero sense that Dressel won’t taper. Of course he will rest!! It may not be a full taper but you can guarantee he will rest, stop lifting heavy weights and drop yardage. No taper and unrested and he could easily end up third or fourth.