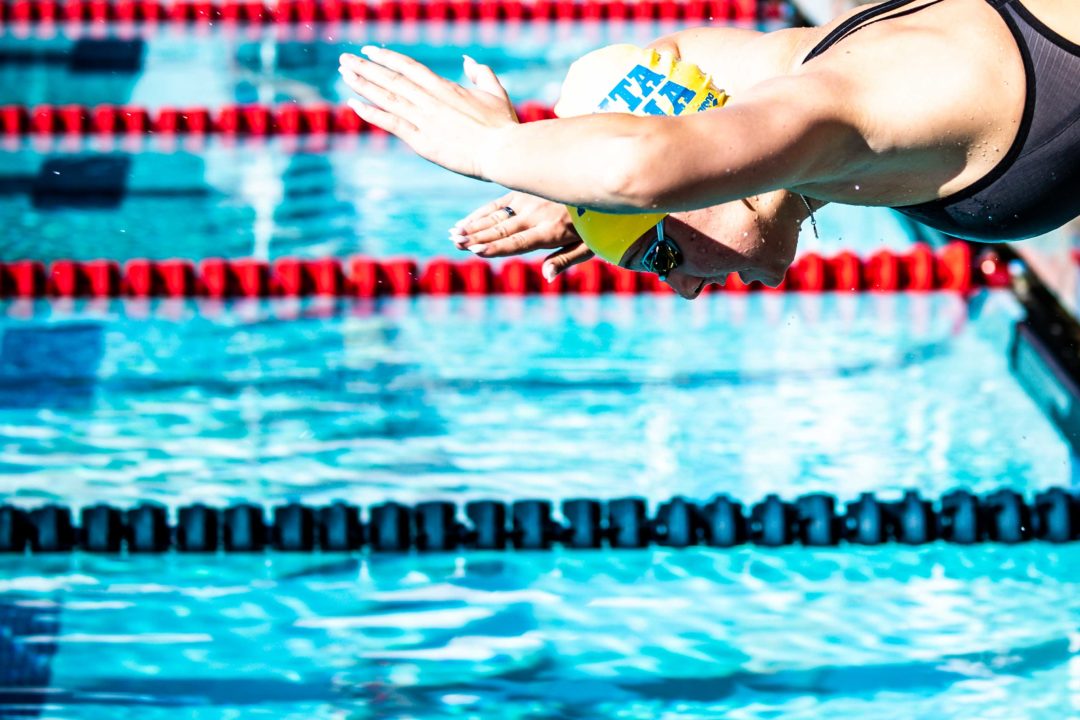 The first day of the meet featured event wins from Claire Tuggle and Matthew Chai, as well as a big-time drop from 12-year old Kayla Han. Current photo via Jack Spitser/Spitser Photography

The USA Swimming 2021 18 & Under Spring Cup started yesterday with competition taking place in four different sites across the country. At the Irvine site, due to the state’s current regulation’s regarding the pandemic, only swimmers based in California competed. The first day of competition featured just two races, the women’s 800 free and the men’s 1500 free. Both events were swum as timed finals.

In the women’s 800 free, it was USA Junior National Team member Claire Tuggle who came away with the fastest time. Tuggle led the field by nearly 12 seconds, touching in 8:43.97. While she finished far ahead of her competitors, she was still well off of her best time, an 8:38.55 that won the event at the 2019 Junior National Championships.

The rest of the field behind Tuggle was much closer in times, with four seconds separating the next two finishers, Mattea Sokolow and Abigail O’Sullivan. Sokolow touched in 8:55.42, while O’Sullivan stopped the clock in 8:59.88.

Finishing just off in the podium in the race was the youngest competitor in the field, 12-year old Kayla Han. Han shaved almost 4-seconds off of her best in the event, touching in 9:02.82. Despite the time drop, she is still ranked as the 11th fastest performer in the 11-12 age group ever. Only four girls have dipped below the 9:00 barrier in 11-12 age group history, including Claire Tuggle, who ranks 3rd.

In the men’s 1500 free it was Matthew Chai of the Fullerton Aquatic Sports Team who came away with the fastest time. The 17-year old won by a margin of over 18 seconds, touching in 15:47.11. While Chai was the only competitor who finishing below 16:00 in the race, he was still well off of his best time of 15:39.65 from earlier this year. That time currently ranks Chai within the top-20 American performers in the event this year.

Leah Smith??? I think Paige could drop a good bit if Simone isn’t “on” she could get second. Also forgetting Emma Weyant.

That’s why I said if she swims it. She has improved quickly in it and with a big, tight race, there is more improvement sitting there. Nice choice.

Because they take 6 people from the 200 free for the 800 free relay. In the IM, you have to be top 2 or you’re out. She may be better at the IM, but she’s not top 2 better. Not to mention a spot on that relay almost guarantees a medal.

So your predictions is saying that Cynthia Woodhead would almost make the Olympic team when she was 13 14. I think people should realize that the 200 freestyle has not improved that much in the United States. But everybody on this thread would probably know that anyway

A National Olympic Committee (NOC) may enter a maximum of two qualified athletes in each individual event, but only if both athletes have attained the Olympic Qualifying Time (OQT)

I’m following with some interest the progress of young Erin Gemmell. Not that she shows spectacular promising times and not that she looks impressive athletically but she has the father who does miracles. His son was an Olympian, not to mention the dedication and job he did with Katie Ledecky. If Erin makes on the team I’ll have some satisfaction. She is currently #14. Too far from the dream? Maybe. But if you check that currently Americans have 16(!) 1:58-1:59 swimmers after Ledecky and McLaughlin then who knows what will happen in 7 weeks.

Let’s all hope she doesn’t disappoint you.

Exactly 10 years ago there was a story about 13 years old girl who broke all NAG long distance records for her age group and was among 10 strongest US swimmers at long distances.
No, it wasn’t a story about young Katie Ledecky who was 14 by the way at this time.
It was Becca Mann.

And she’s still swimming long distances in open water and being an amazing ambassador for the sport of open water swimming.

Sure she does. Great swimming career.

Is she still swimming? She didn’t swim at US Open Water Nationals a few weeks ago…