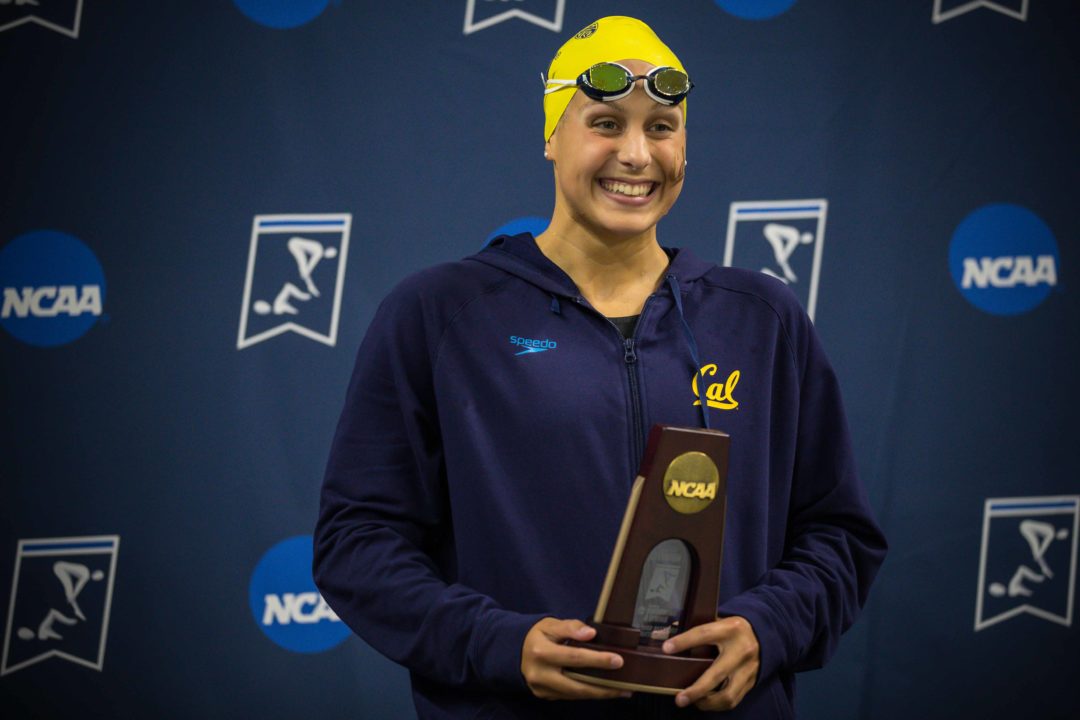 The Cal Golden Bears look very strong this year, favored to put a stop to the Stanford win streak and compete for the NCAA title in March. Current photo via Jack Spitser/Spitser Photography

This year, due to COVID-19 restrictions, the 2021 Pac-12 Swimming & Diving Championships will take to the University of Houston natatorium in Texas instead of the typical host, the King County Aquatic Center in Federal Way, Wash. Diving will be held the same week as the women’s swim meet, though divers are set to compete at the University of Arizona.

The Cal Golden Bears look very strong this year, favored to put a stop to the Stanford win streak and then go up against the Cardinal and Virginia for the NCAA title in March. Meanwhile, USC and UCLA will tussle for third after the Bruins upset the Trojans in their annual crosstown dual meet, while Arizona State is out of the meet entirely as they’re redshirting their roster this season.

NOTE: Arizona State redshirted their entire roster for this season, so they will not be racing at the 2021 Pac-12 Championships

Arizona – Aria Bernal (junior backstroker), Axana Merckx (sophomore IMer), Delaney Schnell (junior diver), — The Wildcats are figuring out their rebuild after losing a senior core that included NCAA-scoring distance swimmers Hannah Cox and Kirsten Jacobsen. Merckx and Bernal were the Wildcats #2 and #3 scorers last season, both contributing more than 50 individual points, while Schnell is an NCAA All-American diver who is back after a redshirt year.

Stanford – Brooke Forde (senior multi), Allie Raab (junior multi), Morgan Tankersley (junior freestyler), Alexandra Crisera (sophomore sprinter/backstroker), Lauren Pitzer (senior freestyler), Mia Paulsen (senior diver), Anya Goeders (junior sprinter) — Even without key members, due to gap year or otherwise, there are plenty of great swimmers on this roster. Forde, Raab and Tankersley lead the way, but there are several freshmen who have been quiet this season that might become overnight stars at this meet. Paulsen, meanwhile, is one of several top divers expected to bring in massive points for the Cardinal.

Utah – Audrey Reimer (sophomore backstroker), Emma Broome (senior butterflier), Emma Lawless (junior butterflier/backstroker), Charity Pittard (sophomore IMer/breaststroker) — Reimer is a dangerous backstroker; she was fourth at this meet last year, hitting a 1:52.51 in her freshman campaign with the Utes. Broome and Lawless are both strong butterfly/backstrokers, while Pittard is another returning scorer, this time in the 200 breast and both IMs.

The Stanford breaststroke group is strongest in the 200, led by the Allie Raab/Zoe Bartel duo.

This year, Forde is doing the 500 free on day two, followed by a grueling 400 IM/200 free double, with no individual events on the final day.

Meanwhile, Cal junior Ema Rajic threw down a lifetime best 2:07.16 at the Stanford Invitational in November, losing to Raab by a mere hundredth. She was just tenth in this race at the 2020 Pac-12s, unable to crack 2:11, but she looks much-improved this season.

Cal has one of the most mythical backstroke legacies in the country, and since 2011, only Cal or Stanford swimmers have won this event at the Pac-12 Championships. Amy Bilquist took the victory for the Golden Bears in 2019, ending a three-year Stanford streak, and Isabel Ivey continued for Cal with a 2020 win (51.06).

This year, no other teams pose much of a threat to Cal’s backstroke group. Instead, it’ll be an intra-Bear, same-name (ish) showdown between defending champ Ivey and freshman Isabelle Stadden.

Ivey has been 51.5/51.8/51.1 in the 100 back in her three performances this season, remarkably consistent between November, January and February meets. She holds a lifetime best of 50.42 from a fourth-place effort at the 2019 NCAA Championships, a meet that came shortly after she graduated high school a semester early to join the Bears that spring. Ivey was 51.73 in November 2018, so her drops from one semester at Cal were pretty dramatic.

Stadden hit a lifetime best 1:49.77 in the 200 back at the Stanford Invitational in November, while she hit a best in the 200 free (1:49.12) at Cal’s dual meet with UCLA in January. Ivey’s the favorite, but Stadden’s newness is on her side, and her experience to-date suggests she can make things interesting.

This season, no Pac-12 woman has been under 22 seconds yet in the flat-start 50 free. Cal freshman Emily Gantriis and Cal sophomore Eloise Riley are 1-2 in the event, though, at 22.14 and 22.22, respectively. Cal also leads the conference with a 1:27.57 from their dual meet with UCLA.

Between Gantriis, Riley, Elise Garcia (#4 in the conference right now at 22.33) and some fourth swimmer (Ivey might be on the other four relays, but she was 21.5 anchoring the relay against UCLA), Cal looks really strong. Stadden has already split a 21.8 this season, too, while a freestyler like Ayla Spitz or Robin Neumann, or a versatile talent like Alicia Wilson, might also slot in. Cal will likely have four legs under 22 here, although they don’t have the hammer of an Abbey Weitzeil or Amy Bilquist this year.

USC, meanwhile, returns at least two names from their third-place relay: Marta Ciesla and Jemma Schlicht. Ciesla has been under 22 before, and a sub-22 lead-off could give the Trojans clear water on the first leg. Schlicht has a best of 22.30, and while 21-high split Laticia Transom appears on the USC roster, she hasn’t yet raced this season. Transom is the defending conference champ in the 100 free and 200 free, so her appearance (or lack thereof) will be huge either way for the Trojans. Meanwhile, freshmen could still keep USC in this battle; breaststroke star Kaitlyn Dobler has been 22.6 this year, and has a 22.01 best from high school, while Anicka Delgado has also been 22.6 this season, hundredths away from a best.

If Ivey does stick with the other four relays, this could be an interesting race; with Ivey in, though, Stanford and USC don’t have that kind of a hammer split right now (Ivey anchored Cal to the win with a 21.4 last season), and Cal will be favored.

Cal looks to have this in the bag with their Swimulator projection, and we can’t argue with that. The Golden Bears have certainly been the best Pac-12 team this year, and they look to be in the NCAA title hunt with Virginia in March.

Cal has all of its bases covered, individually, and a strong sprint core means their relays will be formidable, too. Stanford is never a team to show their whole hand until the very end of the season, but several major redshirts hits at their depth and keep this team from posing too serious a threat. The Cardinal have plenty of swims to be excited about, though, and their stable of divers should keep the Cal win margin more down-to-earth.

Meanwhile, UCLA is very hot right now, coming off of their first victory over USC in a dual meet in 13 years. That, of course, led to a comment section squabble about roster sizes, resting for the meet and so on. It’s true that we have not seen several big names for the Trojans this season, but UCLA also has seven more women on their roster (32 as compared to USC’s 25). It’s no surprise that depth (at least, scoring depth) goes a long way at conference meets.

Both teams, LA rivals, have young coaches in their first years leading programs. While UCLA looks to be deeper, USC has more star power, and this will likely end up being the team race to key in on this week.

Isabel Ivey (Everything)
lol I love it

Back during the conference re-alignments in 2010, there was talk of a pac 16 with Texas, A&M, Oklahoma & OK State. As a swimming fan, that would’ve been a hell of a conference meet. So maybe not as crazy as you think.

I always wonder why Rachel Klinker is never mention in Cal’s section. She’s been posting top 10 times all season.

Cause Cal tryna keep her a dark horse. 😎

Swimswam – do you know why Hanna Henderson isn’t competing for USC this year? She seems to be in LA per her social media, but she’s not on the psych sheets and hasn’t competed, and she would probably be a huge boost to the Trojans.

Transom doesn’t seem to be on the psych sheets either. Same question for her too.