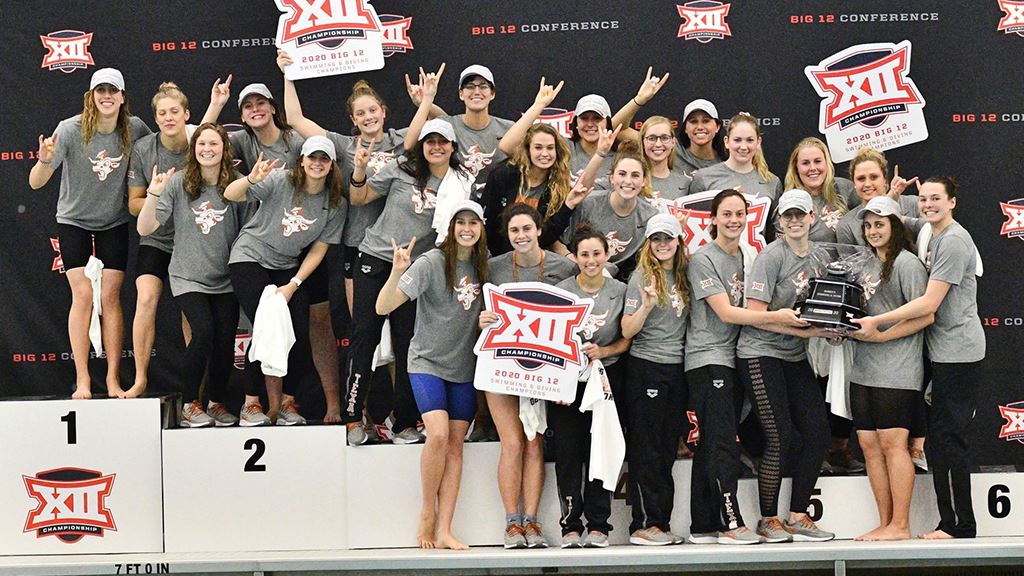 Texas senior Evie Pfeifer wrapped up her final Big 12 Championship with a conference, meet, and school record in the 1650 freestyle.

Texas won their 8th-straight Big 12 title last year, continuing their perfect conference streak since Texas A&M left the conference. The Longhorns are poised yet again to win the title, which isn’t terribly surprising, given that Texas has one of its fastest rosters in recent memory, complete with a stellar freshmen class.

Texas is likely to win all the swimming events, despite losing Claire Adams and Alison Gibson, who each won events last year. The Longhorns also graduated 2020 A finalists Lauren Case, Kennedy Lohman, and Jordan Wheeler. However, Texas brought in a deep freshmen class, which is filled with stars, and covers every discipline, including diving. Leading the Longhorn freshmen is Olivia Bray, who is currently 2nd in the NCAA this season in both fly events, and 3rd in the 100 back, despite the SEC, ACC, and a handful of mid-major conferences already having held their championships.

2020 runner-up Kansas lost a few of their heaviest hitters, including Haley Downey, Jenny Nusbaum, and Elizabeth Amato-Hanner, each of whom posted 3 top-5 finishes. That being said, the Jayhawks still have a deep roster with plenty of probable A finalists. They also return star diver Jiayu Chen, who very well could be the top diver in the Big 12 this year.

Iowa State – Emily Haan (junior backstroker), Lucia Rizzo (junior butterflier), Thorson Lehr (senior breaststroker), Martha Haas (senior breaststroker) – Iowa State returns a number of A finalists. Lehr finished 2nd and 3rd in the 100 and 200 breast respectively last year, and will look for similar finishes this year. The Cyclones have a deep breast group, as Haas also was an A finalist in both breaststroke events last year. Haan was an A finalist in both backstroke events last year, and Rizzo was a 200 fly A finalist.

Kansas – Dannie Dilsaver (junior IMer/breaststroker), Manon Manning (senior backstroker/sprinter), Dewi Blose (junior backstroker/sprinter) Jiayu Chen (sophomore diver), Kate Steward (junior breaststroker) –Chen may be the best diver in the conference, and will be a significant scorer for the Jayhawks. Kansas has a very competitive backstroke group with A finalists Dewi Blose and Manon Manning returning, both of whom also scored in the 50 free last year. Blose was the runner-up in the 200 back last year. Kate Steward swept the breaststroke events last year and finished 2nd in the 200 IM. Although the emergence of Anna Elendt for Texas will make Stewart’s job of defending her breaststroke titles challenging, she’s still a top breaststroker in the conference without any doubt.

Texas – Olivia Bray (freshman butterflier/backstroker), Evie Pfeifer (Senior IM’er/distance freestyler), Emma Sticklen (freshman sprinter/flyer), Anna Elendt (freshman breaststroker), Kelly Pash (sophomore butterflier/IM’er), Bridget Semenuk (sophomore sprinter), Julia Cook (junior sprint freestyler/backstroker) – Bray has been nothing short of phenomenal in her first season with the Longhorns.The same goes for Anna Elendt, who has been one of the top breaststrokers in the NCAA so far this season. Cook’s backstroke looks like its fully back in form, but we could see her swim any number of events at these championships. Evie Pfeifer is chasing an NCAA title in her final season with the Longhorns, and she’s the favorite in the 500 free and 400 IM this week. The Longhorns are also able to put together some of the top relays in the NCAA this year.

West Virginia – Jordan Buechler (freshman sprinter/flyer), Emily Haimes (sophomore sprinter), Ally Vannetta (senior backstroker)  – Vannetta is in excellent position heading into these championships, as she’s already swum significantly faster in the backstroke events this season than she did at last year’s champs. Haimes is looking at 3 A finals in the sprint free events, and will be pivotal on the Mountaineers relays. Freshman Buechler is looking to contribute a large amount of points in her first conference championships.

This could turn out to be a great race between Longhorn teammates, as Emma Sticklen, Bridget Semenuk, and Grace Cooper have incredibly close season bests. If all 3 swimmers race the event at this meet, Sticklen will be seeded 1st with a 22.50, Semenuk will be 2nd with a 22.54, and Cooper 3rd with a 22.55. Sticklen’s time is also her lifetime best, while Semenuk has the fastest best time (22.23), and Cooper has been as fast as 22.36. There’s also the possibility of Julia Cook racing the 50, where she has a personal best of 22.19. However it shakes out, the 50 should be an exciting race this year.

Anna Elendt is the heavy favorite in both breaststrokes heading into the meet. The NCAA breaststroke rankings got a complete makeover this past weekend, thanks to the ACC and SEC championships, so Elendt may have a little extra motivation to lower her season bests. Kansas’ Kate Steward is the defending champ in both breaststrokes.

This isn’t exactly a typical showdown, but it will be a race of interest. That’s because Olivia Bray is currently 2nd in the NCAA this year with her season best of 50.37. The reason this race is so interesting is because the top 100 flyer in the NCAA this year, UVA’s Kate Douglass, appears to have a stranglehold on the event right now. Douglass leads the NCAA with a 49.73, 0.64 seconds ahead of Bray. If Bray can swim her top time of the season in the 100 fly, she’ll be bring herself closer to Douglass heading into NCAAs. Bray has been as fast as 50.17.

Texas has had a stranglehold on the Big 12 since Texas A&M left the conference, and given they have the top swimming and diving squads in the conference, they’re our pick to win the title.

We depart with the Swimulator after Texas, though, as we think Kansas looks like they’ll remain #2 this year. The Jayhawks have a handful of events where they look set to haul in large amounts of points, including the diving, breaststroke and backstroke events. TCU looks to be on the rise, and could finish closer to Kansas this year than last, but we think Kansas will ultimately still finish 2nd.

The reason we’re rolling with the Jayhawks for 2nd instead of TCU, even with TCU’s massive lead in the Swimulator, is because we think the changes in each team’s meet schedules this year due to COVID-19 is causing the Swimulator to over-project TCU by a little bit. Driving that suspicion is mainly that TCU went to a mid season invite this fall, while Kansas did not. That matters because most of TCU’s top times this season came from mid season, as is the case for most teams in a normal season. For example, only 3 swimmers in the Big 12 this season (including a pair of TCU swimmers) have raced the mile. It’s likely that all teams will score some points in that event.

Also, looking back at last year’s results, and specifically what Kansas lost in points from last year to this year, it seems improbable that the Jayhawks will score significantly less points this year than they did last year.

Where is the psych sheet?

Bray could also spice up the 50, but the 100 back could also be a great race between her, Sticklen and Cook

Will Grace Ariola compete for Texas? I hope she is not injured.

No, Grace isn’t racing this season.