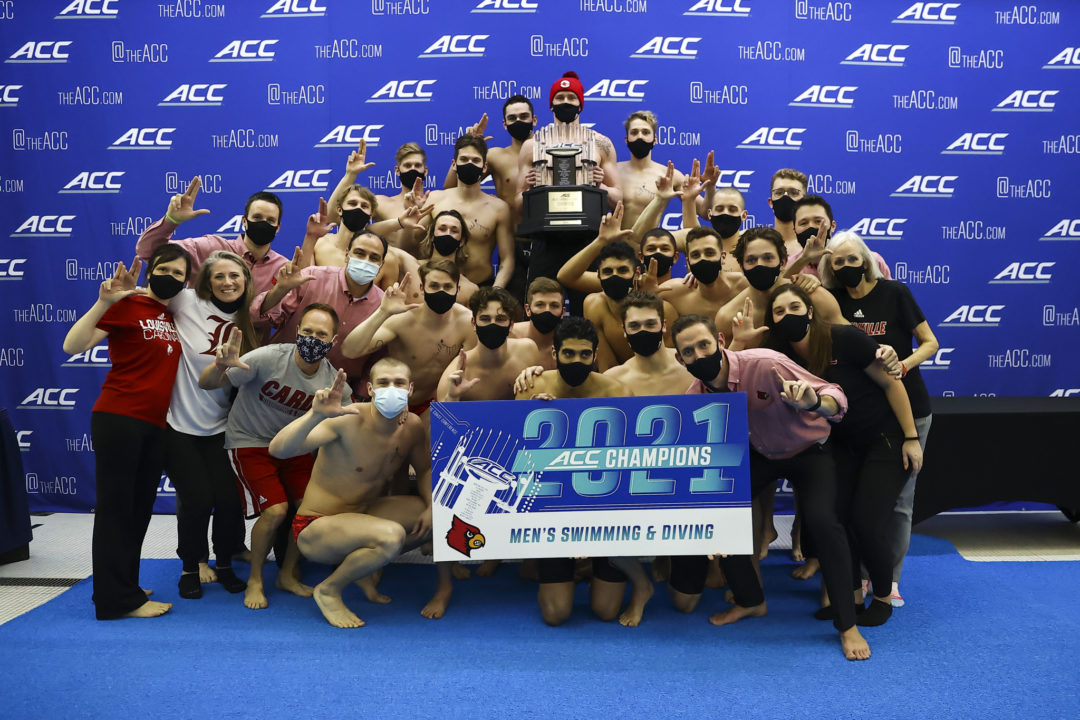 The SEC wrapped up on Friday, but there were still 7 other NCAA Division I Conference Championship meets happening on Saturday evening.

This leaves the Big Ten men’s and Pac-12 men’s championship meets, next week, as the only remaining events on the D1 conference schedule prior to nationals (there will be another round in late March and into April, because of COVID delays).

Here’s your cliff’s notes for what happened on Friday night around the country.

The Houston women took their 5th-straight AAC conference title on Saturday, running away from runners-up SMU and the rest of the four-team field. The Cougars won 4 events on the final day of competition, including senior Mykenzie Leehy taking her maximum 3rd title of the championship, winning the 100 free in 48.61.

A 7-for-7 performance this week gives Leehy 17 career AAC titles, including relays, with the possibility of that extra year of eligibility looming. That 100 free time ranks her 29th in the nation, which will likely earn an NCAA Championship invite.

At the two-team men’s meet, SMU and Cincinnati each landed solid punches, but the overwhelming Mustang depth, especially in diving (1-2-3-4 finish on platform on Saturday) helped them cruise to the title.

In a meet that came down to the final race, the Louisville Cardinals pulled off an upset by just 2 points to not only end NC State’s 6-year conference title streak, but to win their own first conference championship since joining the conference in the 2014-2015 season. The Cardinals nailed down their run to the title by winning the last two individual events of the meet: senior Evgenii Somov took the 200 breast in a new Meet Record of 1:51.26, while senior Nicolas Albiero swam 1:39.08 to win the 200 fly.

Notre Dame sophomore Jack Hoagland finished his meet 3-for-3 in individual events, adding a mile win to earlier victories in the 500 free and 400 IM, stepping up to fill a huge role after Zach Yeadon’s transfer to Cal. Matt Brownstead, an 18-year old Virginia freshman, swam 41.87 in the 100 free to take a sprint sweep.

The Ohio State women won their 2nd-straight Big Ten Championship, scoring the most points in championship history (the conference switched to C-final scoring for the 2016 meet). The Buckeyes took the title in spite of no wins on the final day of competition. The Indiana women went 1-2-4 in the women’s 200 breaststroke, reaffirming their status as a breaststroker powerhouse in the post-Lilly King era. The runner-up Michigan Wolverines took 3 of the 6 event wins on Saturday.

Up just 4 points into the final day of competition, Florida International stretched their final-day lead over Rice to 51 points to win their 7th-straight conference title. The FIU diving crew made the difference – they swept the top two spots in all three disciplines, while Rice doesn’t have divers.

FIU sophomore Jasmine Nocentini finished her meet with a 2nd win, topping the 100 free in 49.07. That’s a big recovery after being disqualified in the 50 free on day 1 in the A-final, where she was a heavy favorite to win.

Stanford made this meet closer than anyone expected, but ultimately Cal was too deep and took their first Pac-12 title since 2015, winning by 74.5 points.

Cal junior Izzy Ivey won the 100 free in 47.54 for her 3rd individual event win of the meet, and then anchored the Golden Bears’ winning 400 free relay in 46.81 to take a moderate margin over USC and turn it into a blowout.

Speaking of blowouts, Cal sophomore Rachel Klinker, 3rd in the 200 fly at this meet last year, won this year’s race in 1:52.82. That put her three-and-a-half seconds ahead of the field.

UNLV matched their women’s performance from a week earlier to take their first WAC team title since 2015. Their 907 points were the most by a WAC conference champion in the history of the championship, which dates back to 1963, outside of 2000, when only 3 teams competed.