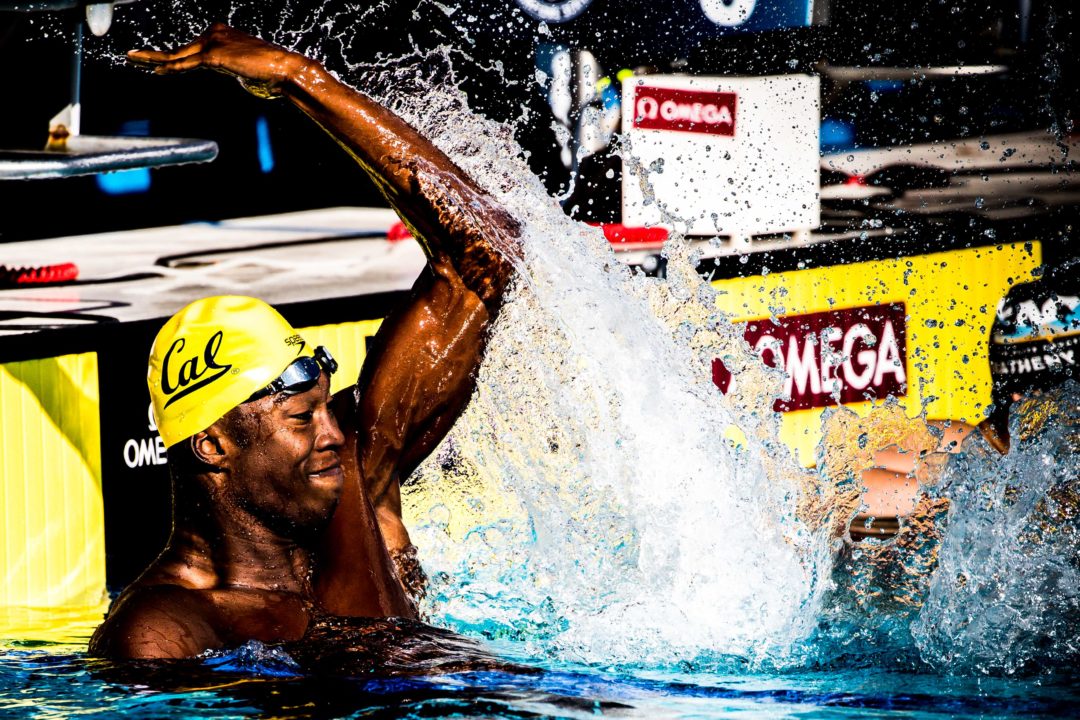 Cal is going up against Texas at the NCAA Championships in March, but first, they'll take on the rest of the Pac-12 at the conference championships. Archive photo via Jack Spitser/Spitser Photography

Cal senior Daniel Carr will take on teammates Destin Lasco, Bryce Mefford and Hugo Gonzalez as he aims to repeat as the Pac-12 champion in the men’s 200 back.

Gonzalez time-trialed a 200 breaststroke early in the meet, and opted to focus on the 200 back for points on Wednesday in Houston.

The Cal men are going to go up against Texas at the NCAA Championships for the national title, but first, they’ll take on the rest of the Pac-12 at the conference championships. Cal won easily last year, though Stanford is arguably a good deal stronger this time around (but not yet deep enough to pose a serious title threat).

USC and Arizona will tangle for third, as Arizona State is redshirting this season due to the pandemic.

Diving already concluded, with Arizona and Stanford jumping out to the lead with over 100 points each.

NOTE: Arizona State redshirted their entire roster for this season, so they will not be racing at the 2021 Pac-12 Championships

Meanwhile, Arizona’s Brooks Fail could crash the Bay Area party. Fail was third in this race in 2020, but his mid-season time of 4:11.79 wound up being the best Pac-12 performance of the season. This year, he’s been 4:15.35 to rank third in the conference, behind the two Cal boys and ahead of Shoults.

Arizona getting David Schlicht back from a redshirt year is huge. At the 2019 Pac-12 Championships, Schlicht was runner-up in this event, nearly beating Cal’s Michael Thomas at the wall.

Cal sophomore Jason Louser, meanwhile, was 3:41 in the 400 IM at 2020 Pac-12s as a freshman, and Cal’s swiss army knife Hugo Gonzalez is actually the favorite. Gonzalez hasn’t raced this event this season, but he won the 2020 conference title with a big-time 3:36.60.

This race is one of Cal’s strongest, with seniors Daniel Carr and Bryce Mefford joined this season by freshman star Destin Lasco. The rookie Lasco dropped a 1:39.60 already this season, while Carr and Mefford have been 1:40-lows.

For a dark horse candidate, look no further than Arizona’s Ogi Maric or USC’s Harry Homans. They’re both transfers, Maric from UNLV and Homans from UGA, and Maric’s lifetime best 1:41.82 ranks fifth in the conference this season. Homans has been 1:43.68 this year, but was 1:41.88 at the 2020 SEC Championships.

Reece Whitley of Cal is the favorite here, bringing in a 1:48.53 from one of Cal’s duals with Stanford. That time is also the nation’s quickest time, and it ranks him #2 in history, not far off of Will Licon’s American record of 1:47.91.

Whitley will be challenged by Stanford’s Daniel Roy, whose 1:51.64 has him second in the nation by over a second. Roy’s season best is also a lifetime best, and his first lifetime best since March 2018, before he got to Stanford. During that same meet, Roy threw down a lifetime best in long course, too, dropping a 2:08.89 to increase his odds as an Olympic team contender in the event.

While this is Whitley’s race to lose, Roy seems primed for more drops in yards, and these two could be the top seeds going into NCAAs when the conference meet dust settles.

The Swimulator has Cal on top by about 300 points, and while it might not be that big a blowout, Cal is far too strong for this meet to be very close. Stanford is projected to finish squarely in second, while Arizona and USC could have a battle on their hands.

This one is pretty easy to pick; Cal is way too deep, and it’s in the ballpark of reality that they win every individual event (aside from diving).

Stanford looks a lot stronger this year, though, largely due to their incredible freshman class. Like we’ve seen with the Pac-12 Women’s Championships, the real battle will be for third; Arizona is projected to do about 100 points better than USC with the Swimulator, though they only put about 20 points on the Trojans with diving concluded.

With Arizona State out, there will only be five teams competing this year. Last year, the swimmer total left some C-finals almost empty, and we could see several events with sparse numbers.

I absolutely love the fact that there’s no break between Saturday night’s conclusion of the women’s meet and the first night of men’s relays today. Can we do this every year? Please?