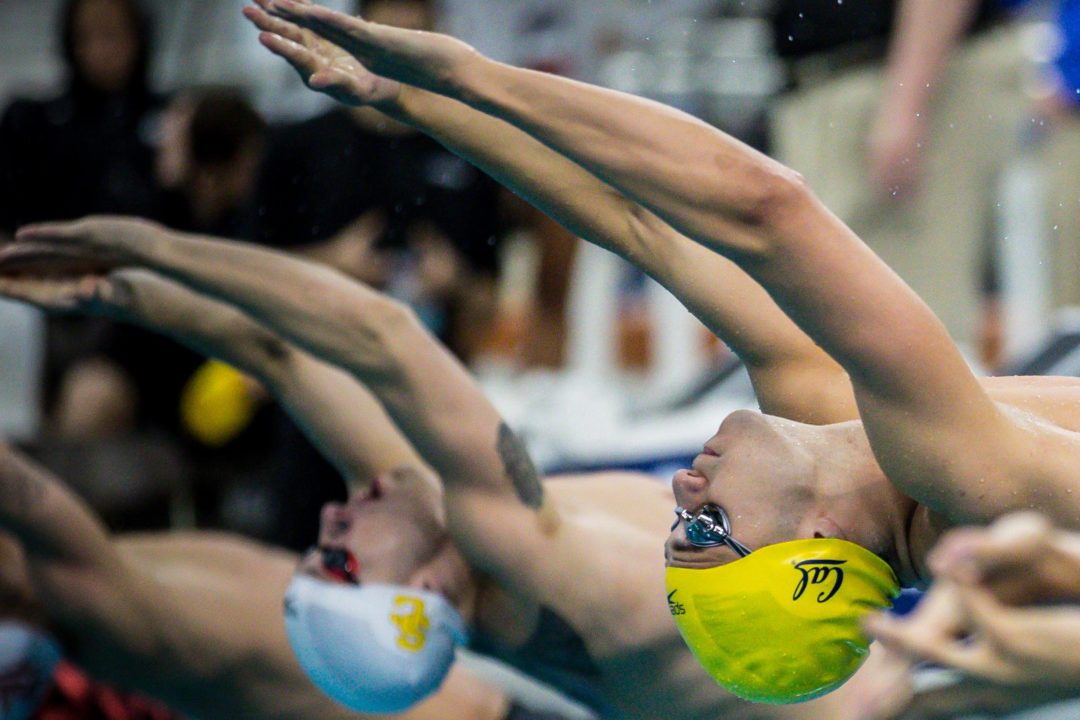 Bryce Mefford was one of six Cal swimmers to advance into the 'A' final of the 200 back on the final day of the Men's Pac-12 Championships in Houston. Archive photo via Jack Spitser/Spitser Photography

Cal had another dominant prelim showing on Wednesday as the men’s team cruises to a fourth consecutive Pac-12 title, putting 14 swimmers through to ‘A’ finals in just four events. This included a dynamite performance in the 200 back, where the Bears put six men into the championship heat, including earning the top-five spots. This included personal best swims from sophomores Colby Mefford and Sebastian Somerset.

Stanford was solid once again with 10 total ‘A’ final swims, including three in both the 100 free and 200 breast. The Cardinal should also have a good performance in the 1650 free later today, with the team holding four of the top-five seeds (2020 ACC champion Zach Yeadon is only seeded sixth for Cal, but was the second-fastest man in the NCAA last season).

Arizona was locked out of the 200 back, but put two swimmers into the other three heats, and USC will make a charge to catch Utah for fourth, going 2/8 compared to the Utes’ 0/6. The Trojans currently sit 43 points back of Utah, and if everyone finished in the same position as they did in the prelims in finals, USC would move ahead by 26.5 points (excluding any 1650 or 400 free relay points).

Since the Utes entered the conference in 2012, last season marked the only time USC was beaten by them at the conference championships, as the teams placed fifth and sixth. It was also the first time the Trojans finished in last place since the first Pac-12 Championship meet in 1961.

Note that this does not include any scoring from either the 1650 free or 400 free relay.

Kopp from Cal with a 14:58.0, putting him 21st in the country with the Pac 12 A final and the Big 10 yet to swim (and only one of those swimmers already has a time better than him). Right on the bubble.

Anyone else getting Big 12 vibes

Is there a heat schedule/whatever it’s called for finals yet? There was a pdf yesterday with times for every event and awards ceremony. I found that very useful.
Edit: I looked it up and it’s called a “heat sheet”. The more I know.

yeah–looks from the heat sheet again that we’re SOL if we want to watch the mile, and probably any C or B finals again. The coverage also dropped out yesterday before the 2 medley relay. Pretty disappointing. You’d think the least you could ask for would be to just have a live feed even without announcers.

They relay will air tonight. They are taking a 45 min break after the last individual event, and we can’t fill enough to stay on air for that. No worries…you will see that and all the events from tonight.

thanks for the response!

Hey, Amy, thanks. Hey it is not scheduled to air live in the Bay Area on the PAC12 Network but will stream on pac12.com. I hope they show some of the B/C finals every now and again. Good work on the commentary BTW.

Backstroke lane at Cal must be insane

Can anyone provide insight into the selection of seed times for the 1650? It appears that at least one goes back to 2016….

I’m guessing the pac 12 coaches agreed to allow that since many of the schools were unable to compete until recently and thus they have no times for the 1650 this season as it is rarely swam in dual meets. Would be dumb to have every single entry be a no time.

Yes it would be dumb but a harmonized approach would provide a more equitable method to lane assignment.

I’m not sure the best way to describe this, but, by and large, Pac-12 swimming culture has become…well…I’ll put it this way: the Pac-12 Championships don’t carry the same intensity as, say, the SEC or Big Ten Championships.

I think the grandest evidence of this is when Cal sent their top swimmers to a Pro Swim over Pac 12s a few years ago.

The coaches just have a different attitude. Most of them are really focused on NCAAs and international competition, and so they’re a little more laissez faire about their conference championship meet than a lot of parts of the country.

Not that they totally don’t care, or don’t want to win, but it’s just treated more with the… Read more »

Thanks Braden. Appreciate that insight.