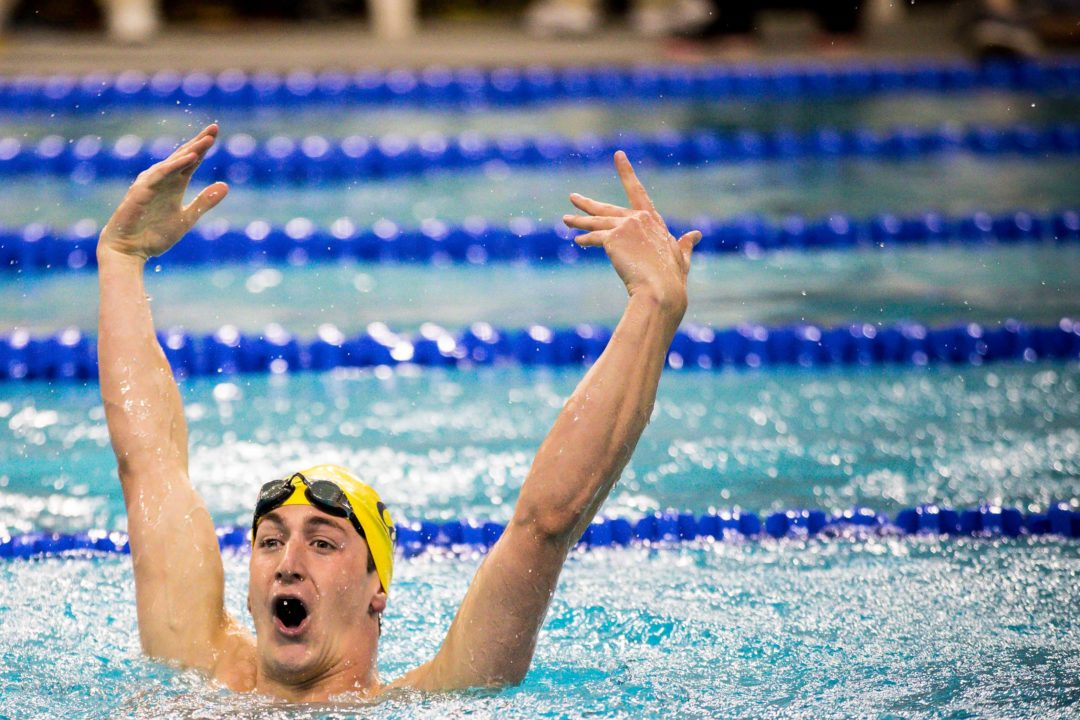 The Cal Bears put on a dominant display in the pool to win a fourth consecutive men’s Pac-12 title in Houston on Wednesday, topping the runner-up Stanford Cardinal by 182 points. This is the Bears’ eighth conference title in program history and sixth under head coach Dave Durden.

After sitting in fifth after the meet’s diving portion, Cal gradually erased the deficit by winning every swimming event over the first two days of competition, ultimately going 17/18 in the pool, including sweeping all five relays.

Hoffer was named Swimmer of the Meet by sweeping his individual events for the second straight year, winning the 50 free, 100 free and 100 fly for 60 points.

You know the deal. 😏 @hoffer_ryan has been named #Pac12Swim Swimmer of the Meet for the second straight year! pic.twitter.com/u6vArsSvLp

Also winning multiple individual events in his senior season was Julian, who set a new program record in the 500 free and then a new conference mark in the 200 fly, becoming the third-fastest performer in history.

Juniors Hugo Gonzalez, Reece Whitley and freshman Destin Lasco were also double-winners, each earning a sweep in their respective events. Gonzalez won the 200 and 400 IM, Whitley repeated as champion in the 100 and 200 breaststroke, and Lasco earned Pac-12 titles in the 100 and 200 backstroke.

Yeadon, who transferred over from Notre Dame this past summer, was the other individual champion on the roster, winning the 1650 free on the final night.

Below, check out all of Cal’s individual scorers:

Seeliger in particular was a star on the relays, producing the fastest 50 free split in the nation this season at 18.38, and going 41-point on two occasions in the 100 free with a rolling start.

For as much of a stud as Hoffer is, it’s hard to believe he still hasn’t surpassed the 100 free time he did as a 17-year old.

Let’s revisit that point in about 3 weeks time.

Great point, and I hope you’re right. I’m not trying to throw shade on Hoffer or Cal; that 41.23 was a swim for the ages.

Do pool bulkheads like the old one at Long Beach Belmont Plaza or the one where Hoffer swam 41.23 make you swim faster? I feel like they can behave like a springboard.

And remember he never got to swim it shaved last season

How does Cal have over 18 scoring competitors?

Teams are allowed to have 24 scoring entrants, including divers. Each diver counts as 1/2 an official entry.

So, in theory, a team could have 48 scorers, if they entered 48 divers in the meet, each only dove in one event, and they took 1-16 in all three disciplines.

University of Miami is taking notes

Miami’s real problem is that men’s diving is held with women’s swimming. Otherwise, if I’m the coach I put my divers in relays and tell them to “just finish legally” and take the points.

Probably not worth the separate trip just for that.

How many points would that score?

In a 16-place scoring meet like Pac-12 men, each event awards a total of 155 points, barring DQs.

So that would score 465. Which this week would’ve been enough for 4th place.

Could score another 140 points by putting them all in relays and finishing legally. Add in those 140 points and you’re still in 4th place though.

Most College Conferences in the country, including the NCAA championships is 18 scoring competitors (even with divers as 1/3 or 1/2 depending on the inclusion of tower diving). Is the PAC-12 different in this way?

Most conferences are not in fact 18 scoring competitors.

Some are, but not most, and every conference is a little different.

Maybe I have a short memory but this is the strongest Cal men’s team I can remember. They have a legitimate contender for national champion in every single event. Maybe not the favorite, but a contender. Balanced with no glaring holes at all which might have happened in previous years. And behind them is some depth in almost every event. 5 top tier relays. Contributions across all the classes. No real LCM international superstars but boy do they swim fast in the short pool.
Yeah I know Texas is strong, loaded, unreal, blah blah blah but I am going to bet they fold like a power grid run by libertarian cowboys come late March.
This might be the… Read more »

Whats good with Cal’s divers tho? Will they be able to compete without those events?

6
-1
Reply
BearlyBreathing
Reply to  Murphy is my dad

16
0
Reply
Austinpoolboy
Reply to  Murphy is my dad

Jordan Windle may be the difference maker for Texas. Who knows: 60-80 pts?

Unless they put him on a relay, it’d be hard for him to get over 60 points…

Who knows, maybe he has great underwater‘s

I gotta say, maybe it’s been the lack of swimming over the past yearish, but I feel like this might be one of the closest meets between the two teams in a while. It just seems like a lot of the relay tems have similar times and both teams are pretty loaded in their respective events.

Starting to wish Willenbring, Vines and Park were swimming haha.

I have felt that Texas was the favorite all year long, but damn if Cal didn’t just change my mind. Cal has more top and talent but Texas is deeper.

I think Texas will get a lot more B finalist then Cal, so the question will then become how well they maximize those B finalists. And diving

Sorry if I missed it, but what was the J Louser explanation?