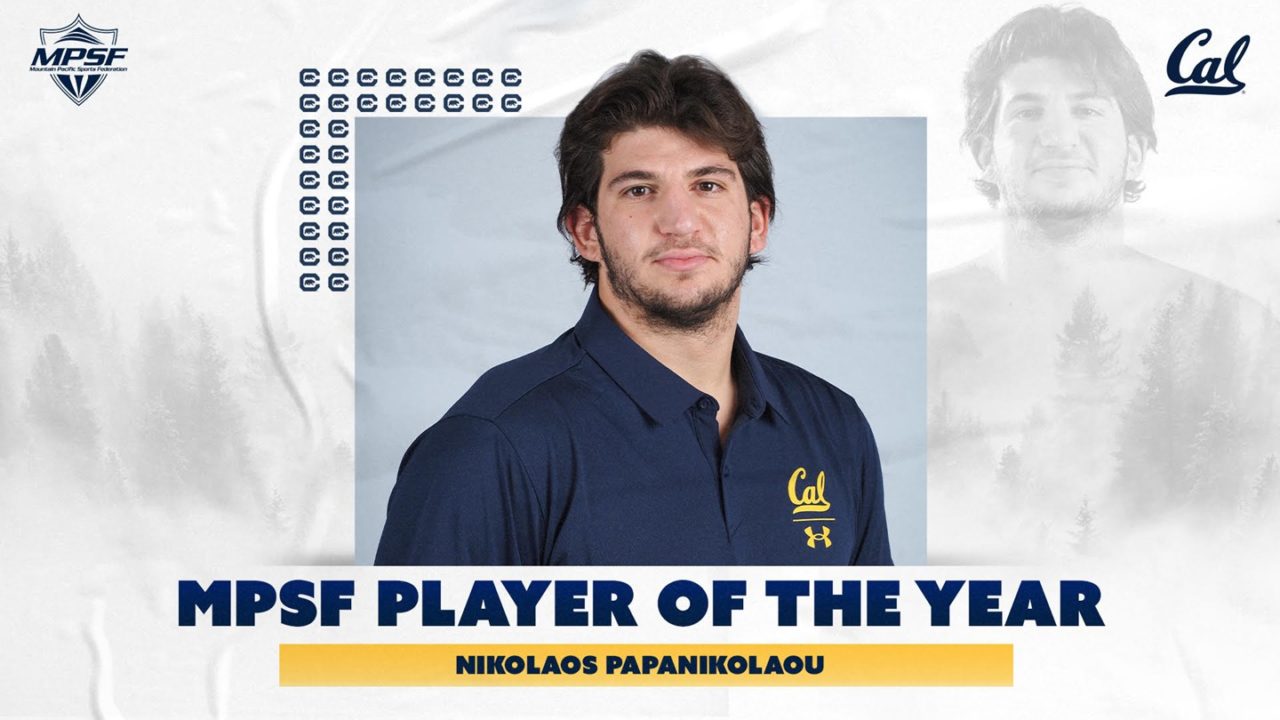 Papanikolaou ranks third in the MPSF with 25 goals and fourth with 26 points and 14 steals through the regular season, scoring in all 10 of the Bears' games. Current photo via Cal Athletics

Papanikolaou ranks third in the MPSF with 25 goals and fourth with 26 points and 14 steals through the regular season, scoring in all 10 of the Bears’ regular season games. He earned 44 ejections (15 penalty shots) and is the only player in the MPSF this season to draw six exclusions against a conference opponent, having done so twice. Papanikolaou was one of three players in the MPSF to collect four steals in a single game, also doing so twice during the season.

Everist guided the Golden Bears to a 7-3 regular season record, the MPSF’s top tournament seed and the CWPA’s No. 1 ranking. All seven of Cal’s wins came against MPSF competition and top-four opponents. Cal was the only MPSF team this season to complete a weekend sweep, winning all three games at USC (Feb. 6-7). Everist is 390-121 overall (.763) since taking over the California program in 2002. This is his second MPSF Coach of the Year award and his first since his initial season.

Senior 2-meter Nikos Delagrammatikas and junior utility Jack Deely joined Papanikolaou on the All-MPSF First Team. California shared the conference-high with three players as first team selections. Team captain Delagrammatikas tallied 14 points, 10 goals, four assists and five steals through the regular season. He finished the regular season with two hat tricks, scoring three goals each in two wins over UCLA. This is the third All-MPSF selection of Delagrammatikas’ career. Deely finished the regular season with a team-high 29 points (17 goals, 12 assists). The junior had a season-high five goals against UCLA on Feb. 21 and joined Papanikolaou as the only Bears to score five goals in a single game this season. This is Deely’s first career All-MPSF honor.

Earning Second Team selections for the Golden Bears were sophomore attacker Garrett Dunn, sophomore goalkeeper Adrian Weinberg and freshman attacker Alika Naone. Dunn totaled 13 points (six goals, seven assists) and seven steals through the regular season, scoring a season-high three goals and adding three assists to finish with six points in a win over No. 1 Stanford on Feb. 7. It is the sophomore’s first All-MPSF selection. Naone had an impressive freshman campaign for the Bears, finishing the season tied for second on the team with 26 points (16 goals, 10 assists) and adding nine steals. Naone scored in all but one game this season and had at least one point in every contest. His season-high five points came in a 16-15 win over UCLA on Feb. 21, when he finished with two goals and three assists. Weinberg finished the regular season with a 7-1 record in the cage, 104 total saves and averaged 13.87 saves per game. He collected a season-high 15 saves in the Bears’ Feb. 7 win over then-No. 1 Stanford, holding the Cardinal to 11 goals, its second-lowest score of the season. Weinberg had at least 13 saves in six of the eight contests he played. This is the second career All-MPSF honor for the sophomore.

Rounding out the conference honors for the Golden Bears was sophomore 2-meter Warren Loth, who earned All-MPSF Honorable Mention recognition. Loth totaled seven goals, five drawn exclusions and five steals through the regular season and appeared in all 10 contests for the Bears. He scored two goals each in two wins over UCLA, including the season opener on Jan. 23 and the penultimate regular season contest on Feb. 21, when he also collected two steals. This is the first All-MPSF selection for the sophomore.

The Bears head down south this weekend for the MPSF Championship at UCLA. As the No. 1 seed, Cal will open the tournament in the semifinals Saturday at 11 a.m., taking on the winner of Friday’s contest between. USC and Austin/Penn St. Behrend. For complete coverage of Cal men’s water polo, follow the Bears on Twitter (@CalWaterPolo), Instagram (@CalMWaterPolo) and Facebook (Facebook.com/Cal-Mens-Water-Polo-Fan-Page).