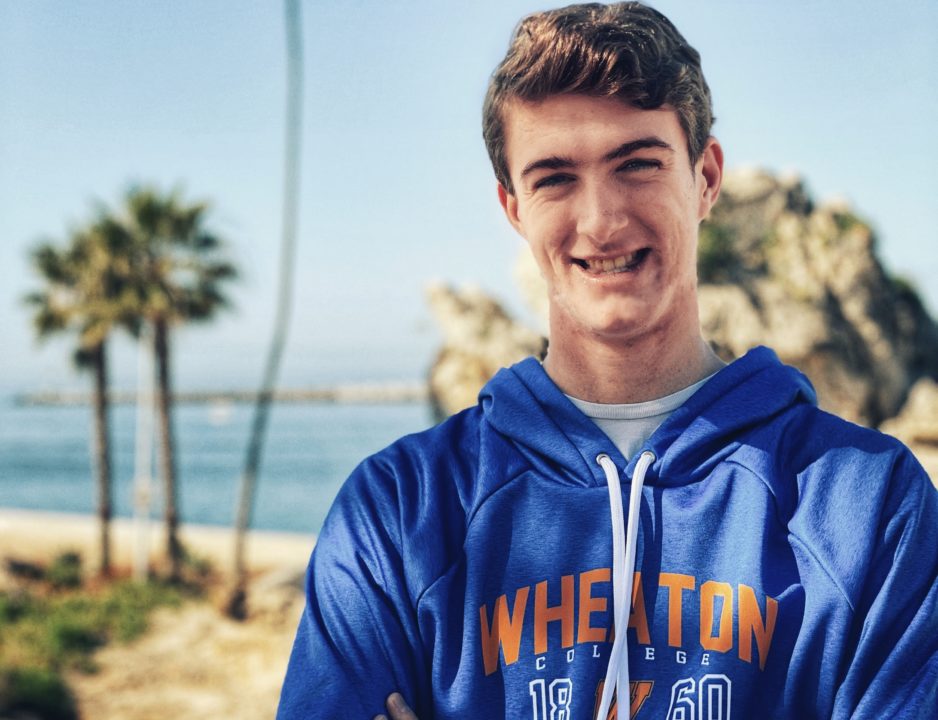 At Brother Rice High School, Schumacher was an IHSA State Qualifier in the 50 and 100 free as a sophomore in 2019 and junior in 2020

Backstroke specialist Bryce Grover has verbally committed to swim for Chapman University beginning in the fall of 2021.

The Grizzlies led from wire-to-wire, accumulating 879 total points over the three-day event to finish a full 470 points ahead of second place Transylvania.

Andrew Boggus will join the Wasps in the 2021-2022 season with three times that are already faster than school records, as Emory & Henry transitions to DII.

The Thunder swimming programs completed a busy weekend on Saturday by hosting a portion of the 2021 CCIW Cup event. The CCIW Cup was hosted on Saturday at Wheaton (Wheaton, Illinois Wesleyan and North Central) and Carthage (Carthage and Augustana). On Friday Millikin and Carroll competed at Carthage. Results from each event have been merged to compile results. While not a true CCIW Championship, and it will not appear in the CCIW record books, the event was held to give student-athletes the opportunity for a culminating experience this season. Prior to today’s event in Lederhouse Natatorium, the Thunder swimming programs held intrasquad events on Thursday and Friday, named the Thundercup.

Sophomore Abby Pardridge posted the top CCIW Cup time in the women’s 200-yard backstroke with an effort of 2:05.86, currently the second fastest time in Division III. Emily Hahn had the fifth-fastest time in the same event with an effort of 2:11.46. Abby Rutledge was third among the participants in the women’s 200-yard butterfly with a time of 2:13.57.

Freshman Sophia Pelling’s time of 24.51-seconds in the women’s 50-yard freestyle was second overall, and her relay lead off of 24.38 was 12th in team history. Senior Kirsten Peters recorded a time of 24.67-seconds that was fourth overall. Pelling was also second in the women’s 200-yard freestyle with a time of 1:58.17. Peters was second among the competitors in the 100-yard freestyle in 53.77-seconds and Pelling was fourth in 53.84-seconds.Freshman Connor Davis posted a top time of 52.49-seconds in the 100-yard backstroke that was more than a second faster than the second-place time of 53.61-seconds that was posted by Augustana’s Aidan McConkey. Davis recorded the second-fastest time in the 200-yard backstroke with an effort of 1:55.54. Teammate Ethan Kile was third in the same event in 1:56.40.

The Wheaton men’s 200-yard medley relay of Davis, Fitzgerald, Cameron and Griffith had the fastest time in the event with an effort of 1:32.50. The quartet finished just ahead of the second-place time of 1:32.80 that was recorded by Carthage’s relay.

The foursome of Rutledge, Rogers, Pardridge and Peters had the top performance in the women’s 200-yard medley relay with a time of 1:47.92. Wheaton took second in the women’s 400-medley relay as Pardridge, Min, Rutledge and Shepherd posted an effort of 3:59.64.
Note Worthy: In addition to his school record in the 100-yard breaststroke and his mark in the 200-yard breaststroke, Fitzgerald also set some new school marks in other events in Thundercup events earlier in the weekend with the fourth-fastest 200 individual medley in program history and the seventh-fastest 100-yard butterfly in the team record books…Smith swam a time of 51.09 in the 100-yard butterfly earlier in the weekend in the Thundercup that was the 12th-fastest in program history.