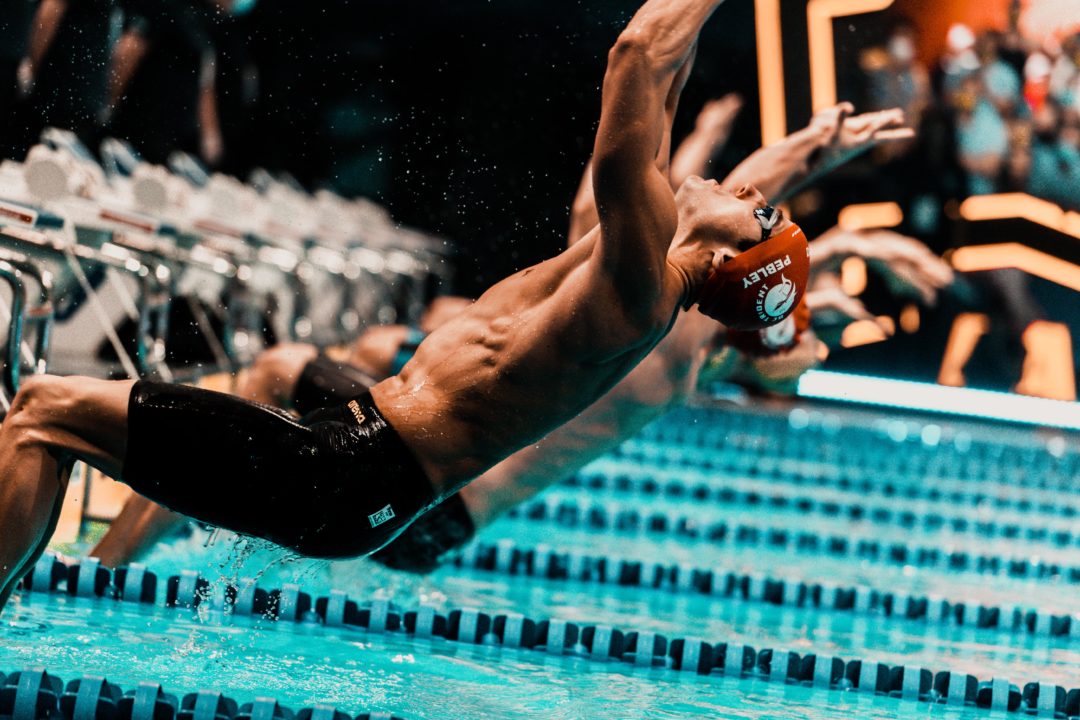 200 back champ Jacob Pebley will take on the 200 free for the DC Trident while butterfly powerhouse Tom Shields is in the 50 free skins for the LA Current. Stock photo via Mike Lewis/Ola Vista Photography

Yesterday’s men’s 200 back champ, Jacob Pebley of the DC Trident, is entered in the 200 free today along with the 100 back. Aleksandr Shchegolev will tag-team with Pebley for the Trident in the 200 free, along with the 100 free and 50 free skins. During yesterday’s relays, Shchegolev split 46.45 during the 4×100 free relay before turning around and hitting 46.23 in the medley relays. Meanwhile, Pebley only swam 47.22 during the free relays.

After placing fourth during yesterday’s 400 free event, Zane Grothe is not entered for day two’s events. Also, Zach Apple will only swim the 100 free today. Yesterday, Apple placed 8th in the individual 50 free, but later swam a flying 100 free split of 46.39 in the medley relays.

DC’s Cody Miller is in for the 100 breast on day two following his 3rd-place finish in the 200 breast. This will be Miller’s only swim for the day. During match four, Tommy Cope placed 7th in this event behind 5th-place teammate Felipe Franca Silva. Today, Cope will swim both the 100 IM and 400 IM alongside yesterday’s 200 IM champ Andreas Vazaios. Cope will also swim breaststroke for the mixed 4×100 medley relays as well was Franca Silva. Vazaios will also take on the 50 fly over the 200 fly today. In match four, Vazaios took second to LA’s Tom Shields in the 200 fly, but finished 8th in the 50 fly.

Shields, who is favored to win the 200 fly and potentially the 50 fly, is entered in the men’s 50 free skins event today as well. Shields placed 5th during yesterday’s individual 50 free event as well as split 47.97 on the free relays, one of the faster splits on the Current’s relays.

Known free/fly sprinter Maxime Rooney has tried out a bunch of different events for the LA Current, including the 200 back, where has has proven top-3 scoring ability. Today, Rooney will be entered in the 100 IM and 50 fly. In previous matches, Rooney has swum the 100 back and/or 100 free for day two events. This will be Rooney’s first 100 IM in his ISL career while his best finish in the 50 fly was 6th during match two.

LA’s Beryl Gastaldello will swim the 50 fly skins for the second time this season. During match four, Gastaldello picked up nine points in the first round with the top time, yet faded to third in the second round and failing to advance to the third round. She will be joined by New Zealand record-holder Helena Gasson to go up against the likes of Toronto’s Louise Hansson and Michelle Coleman as well as versatile Iron sprinter Ranomi Kromowidjojo.

Kromowidjojo placed second in the 50 fly during match three and then was entered in the 50 free skins, where she placed third in the second round of the skins event.

Rooney is swimming what the coaches are telling him to swim to get points. Backstroke was a hidden talent.