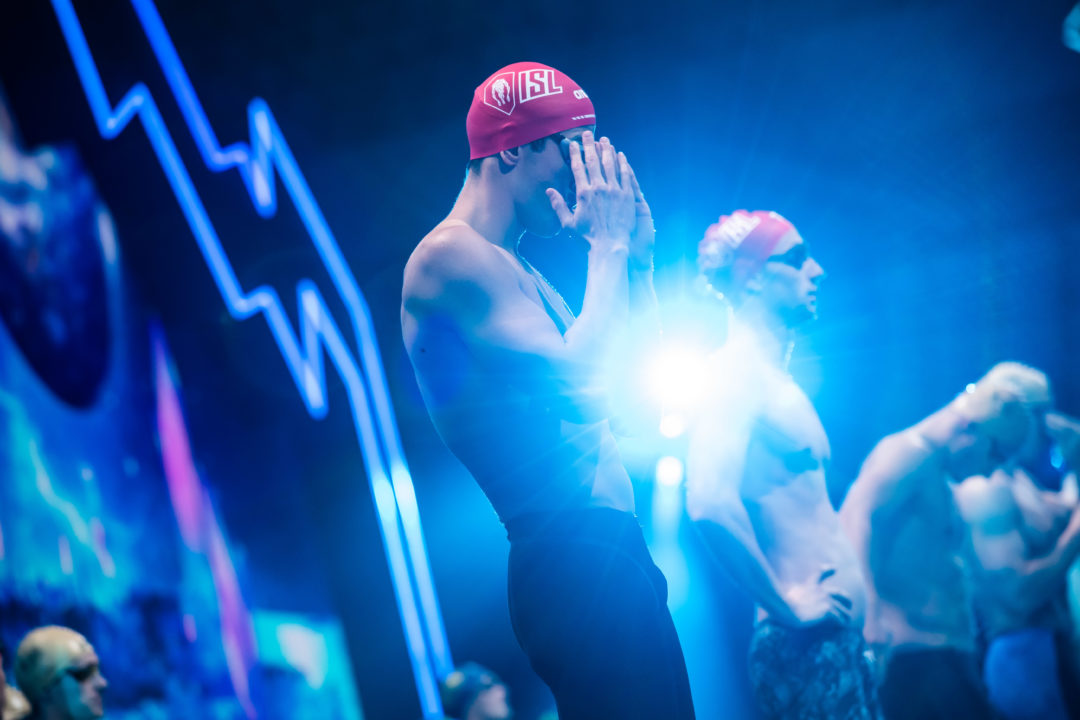 With only days to go until the first meet of the 2021 ISL season, the DC Trident have confirmed list of the athletes they will send to Naples, Italy. Stock photo via Mike Lewis/Ola Vista Photography

With only days to go until the first meet of the 2021 International Swimming League season, the DC Trident have confirmed list of the athletes they will send to Naples, Italy for their first 4 matches. DC will send the following 32 swimmers to Naples:

*Note: Maddie Groves is expected to be on the Naples roster, however, it hasn’t been fully confirmed yet.

As a reminder, despite the fact that DC will send 32 swimmers to Naples, each team is only permitted to enter 28 swimmers per meet. DC will be among the first ISL teams to race in 2021 as they are scheduled to race at Match 1 along with Energy Standard, Toronto Titans, and Aqua Centurions.

Men’s sprinting is looking to be DC’s strongest area this season. The 100 free in particular looks to be in excellent shape heading into the season. In the 100, DC has Zach Apple and rookie Ryan Hoffer at the top. Apple was the second-fastest 100 freestyler in the ISL last season, behind only Caeleb Dressel. Hoffer excels most at short course swimming as a product of his turns and underwaters. In SCY swimming, Hoffer has been a 40.9 100 freestyle, which could very well put him in the 45-second range for SCM. It’s entirely possible Apple and Hoffer could both be top-5 100 freestylers in the league this year, certainly top 10 at the least.

Next up for DC’s 100 freestylers is Sergii Shevtsov, who was the seventh-fastest ISL performer in Season 1, back in 2019. His personal best of 46.38, which was from ISL season 1, would have put him 11th in the league last year for season 2. Trident could be a very real force in the 400 free relay, as Apple, Hoffer, and Shevtsov may be the best trio of 100 freestylers on any roster in the league this year. For the fourth spot on that relay, DC has plenty of options. Aleksandr Shchegolev swam a 47.10 in the 100 free in December of 2020, so he’ll be a top contender for the relay. Swimmers who could also be tabbed for that relay include Andreas Vazaios, Drew Loy, and Mark Nikolaev.

With DC’s women’s roster, sprint backstroke is going to be another strong point. Linnea Mack and Ali DeLoof were top-10 50 backstrokers in the league last year and will be heading up the 50 back for DC this year. After Mack had an explosive LCM season this spring, we’ll be watching out to see if she swim SCM lifetime bests this fall as well. If Mack can drop time in the 50 back, and get down towards — or even under — 26.0, she’ll be right at the top of the league’s 50 backstrokers this year. DeLoof swam season bests of 26.4 and 26.3 in season 1 and season 2 respectively, both of which made her a consistent scoring threat.

In the 100 back, DeLoof was also top 10 in the league last year. Mack was just outside the top 20, but again, if her LCM success from earlier this year translates into her SCM racing this fall, we should see her move up significantly.

Other bright areas of DC’s roster include women’s freestyle and men’s IMs. While DC might not end up with any women’s freestyle champions this season, they have quality depth in each of the 4 individual free events. Anna Hopkin will likely lead Trident in both the 50 and 100 free. Hopkin spent several years at the University of Arkansas, where she was a historically fast sprinter in the NCAA. Hopkin has been 23.7 in the SCM 50 free, and 51.9 in the 100 free, both of which should be towards the top of the ISL this season.

In the sprint events, DC has a great duo behind Hopkin, in Linnea Mack and Ting Wen Quah. Mack is coming off an excellent LCM season, particularly in freestyle events, where she dropped to 24.49 in the LCM 50 free, and 53.78 in the 100 free. Notably, Mack’s LCM 50 free is now faster than her best in the SCM 50, which indicates she’ll likely drop time this fall. Quah swam a 24.03 during the last ISL season, which put her just outside the top 10.

Neale is a 3:58 400 freestyler, which she posted during last year’s ISL season. Szuszanna Jakabos, Joanna Evans, and Annika Bruhn will also be able to provide depth in the event if called upon.

Tommy Cope, Cody Miller, and Drew Loy are also slated to compete in IMs for trident.

DC Trident’s women’s roster does have a bit of a weak spot in the women’s breaststroke events. Trident has solid depth in the breast events, they just don’t have the most top-end speed in the league this year. Maria Temnikova leads the breaststroke squad, after swimming a lifetime best of 1:04.69 in the 100 breast in December of 2020. Temnikova’s time, however, still would have put her outside the top 10 in the ISL last season. Behind Temnikova are Tatiana Belonogoff and Bailey Andison, however, Andison is primarily an IMer.

On the men’s side, the 400 free is fairly thin. Zane Grothe and Velimir Stjepanovic are a nice duo in the 400, but that may be all Trident has. Jay Litherland could be called upon at times to race the 400, but outside of Litherland, DC doesn’t have many other options.

DC Trident didn’t make it out of the qualification stage last year, and they lost some key pieces. Season 2 members Ian Finnerty, Bethany Galat, Margo Geer, Amy Bilquist, and Robert Howard are just a few of the names who are no longer with the team. However, there’s a strong argument to be made that their offseason pickups outweigh the losses.

Ryan Hoffer could turn out to be a star in the ISL, and will be a major help to Trident’s relays. The additions they’ve made have filled gaps and added depth. They’ve completely reworked their sprint squads, and ultimately made them faster at the top, and deeper. Also, Linnea Mack‘s surge in LCM racing earlier this year provides hope that a returning member from last year will be coming back even faster this year.

DC has improved their relay potential, and they’ve worked to shore up their skins events. All things considered, this DC Trident squad appears to be much better positioned to make it out of the regular season than last year’s team.

I think DC’s slightly less glamorous roster puts them in a fairly strong position compared to the teams that are more Tokyo swimmer heavy and will have a lot more swimmers opting out of parts of the season. I don’t think they’ll be up with Cali or Energy but will be a lot closer to the others than last year

So, every team is a sprint team?

Maddie Groves is one of many swimmers on the roster who didn’t go to Tokyo. While she used the idea of a boycott of Trials to gain attention for her cause (I’m not here to say if that cause was right or wrong), she didn’t actually boycott Tokyo – she boycotted the Olympic Trials.

That’s an important distinction, because it was super unlikely that, had she gone to those Trials, she was going to qualify for the Olympics.

The narrative has been twisted because “boycotting the Olympics” sure is a bigger statement than “boycotting Trials,” but it is very, very unlikely that had she raced Trials in June, she was going to swim.

I was just stating a fact that the writer is wrong as the article states she went to Tokyo. Just surprised the writer thought she had gone to Tokyo