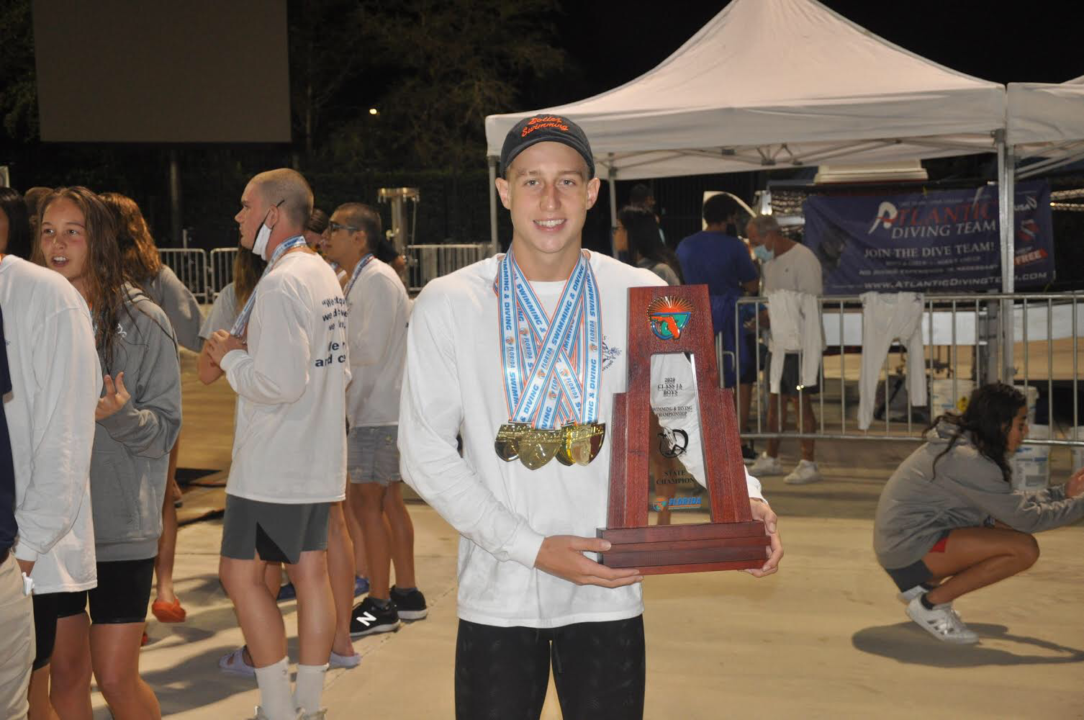 Dean Farris, as always, did his part, winning both his individual events and both relays he was on.

The Cal women will be in action twice this week, visiting USC on Friday and UCLA on Saturday.

The Mids outscored the Lions by 44 points over the last four events to rally for the 169-131 victory.

In all, the Buff and Blue claimed 23 of 32 events on the day, including all four relays contested.

However, there are still several notable athletes who have yet to announce their commitment to any school. Although several factors may be contributing to this, it is impossible to know when they’ll officially announce which college they are going to.

On the boy’s side, there are currently 4 top-20 recruits who have not committed to a college yet, they are #6 Sebastien Sergile, #9 Sam Powe, #11 Zhier Fan, and #15 Andres Dupont Cabrera.

All four swimmers currently reside in states that are home to some of the top NCAA programs in the country, Sergile is from Georgia, Powe is from Tennessee, Fan is from Texas, and Dupont Cabrera is from Florida. With this, it seems likely that at least one of these swimmers will remain in-state.

Sergile, who competes for Swim Atlanta is an incredibly versatile swimmer, who focuses primarily on the mid-distance freestyle and butterfly events. Since early 2020, Sergile has quickly evolved into one of the top talents in this entire recruiting class, dropping over 3 seconds off of his 200 freestyle time, 5 seconds off of his 200 butterfly, and 3 seconds off of his best time in the 200 IM since the end of the pandemic lockdown. Sergile is also coming off of a strong summer in the long course pool, where he placed 3rd overall in the 200 butterfly at Wave I of US Olympic Trials, just missing Wave II.

Powe is another swimmer who saw huge drops last year. When the rankings for the High School Class of 2022 originally dropped in 2020, Powe wasn’t even mentioned on the list. However, he rose all the way to the #9 ranked recruit in 2021 after dropping over 6 seconds in the 200 backstroke (1:48.4 to 1:42.3), putting himself on the cusp of an NCAA-invite time. Powe also has decent range in the 100 and 200 freestyle, giving him value as a relay swimmer in the NCAA format.

Cabrera represents Mexico internationally, but like quite of few of our top class of 2022 swimmers with international roots, he trains out of the U.S. and competes at the club and high school level within the United States. Although he focused more on long course for the 2021 season, attempting to qualify for Mexico’s Olympic  Team, Cabrera still made big strides in the short course pool. Like Powe, he was unranked in the initial rankings for the class of 2022, but managed to drop times of 20.28, 43.91, and 1:35.60 in the freestyle events to slot himself into the conversation.

Several other “Best of the Rest” recruits are also still uncommitted, including

Hunter Lund committed to UNC back in July.

My boy Tom Caps is goated Every coach needs to hit the bro up!

Keep Indiana University, lead by GOAT Coach and Hall of Famer, Ray Looze, and Cory Chitwood and staff. They are taking kids and making them great!

How many of these kids are waiting for Stanford admissions? Anyone knows?

maybe some of the top 20 ones but the rest are probably waiting for an Ivy.

Not sure how accurate this is, but I heard Zhier Fan is committed, but is waiting to get official acceptance to the university before announcing it.

I thought I heard somewhere (perhaps on some recruiting twitter) that Gissendaner verballed to USC. He’s on the same Scottsdale Aquatic Club as current 2021 Trojan recruit Daniel Matheson.