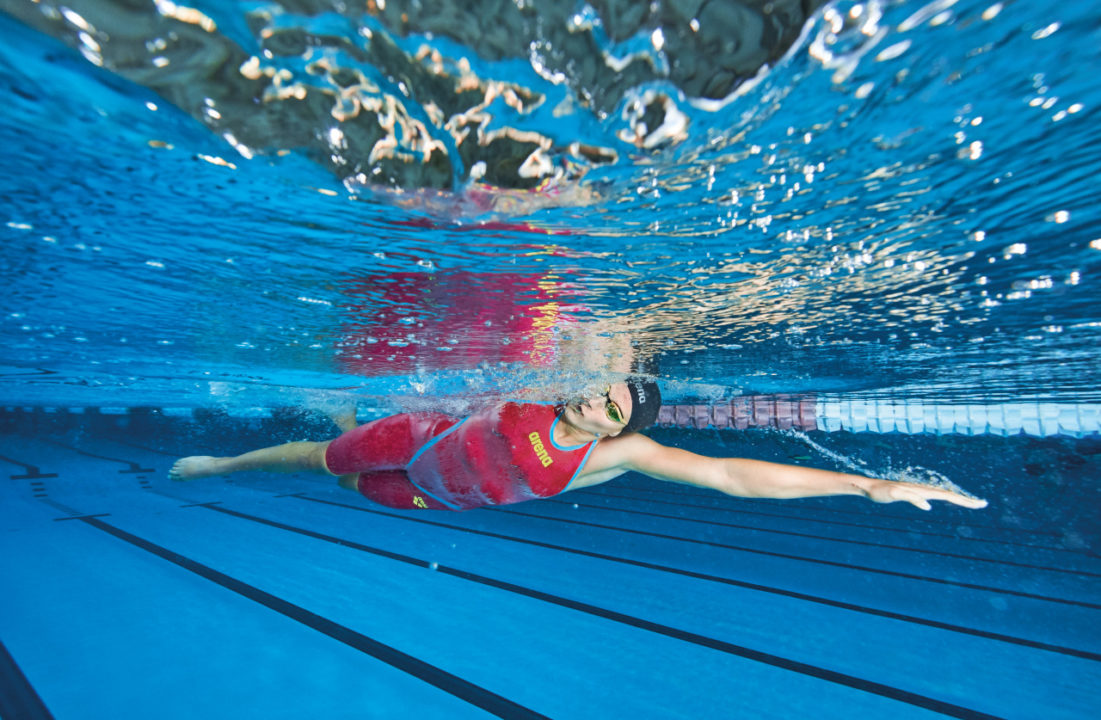 Tonight's finals session will feature the women's 50 breast, 200 free, and 400 IM along with the men's 200 free and 200 butterfly. Archive photo via Stephane Kempinaire

It’s time for day 3 finals at the 2021 French Elite Swimming Championships and there will be another 5 events in which swimmers will be hoping to qualify for the Olympic Games.

In the men’s 800 freestyle there were 3 men under the necessary prelims standard on day 2 who will be in contention to join David Aubry who has already qualified for Tokyo in the event. Marc-Antoine Olivier led the pack in the prelims with a 7:54.80, ahead of Joris Bouchaut‘s 7:56.82. A little bit further out but not out yet was Tommy-Lee Camblong who was an 8:03.42 during the heats.

The 200 freestyle prelims were led on the men’s side by Jordan Ponthain and on the women’s side Charlotte Bonnet. Both have yet to qualify for the Games. They will be back tonight to try and clinch an Olympic-qualifying standard and victory but will need to fend off some solid fields.

Leon Marchand and Fantine Lesaffre are among those who qualified for Tokyo earlier on in the 400 IM and 200 IM respectively. Both will be in the running to add a second Olympic event to their roster this summer as they head into the men’s 200 fly and women’s 400 IM A finals.

It was Tunisia’s Ayoub Hafnaoui who delivered the quickest time in the men’s 800 freestyle final, swimming a 7:45.24 which is an improvement upon his PB heading into the meet of 7:49.09. Hafnaoui also got within 10 seconds of the current Tunisian record in the event of 7:35.27 which is held by Tunisian freestyle legend Oussama Mellouli, set back in 2009.

The French title, however, went to the fastest French man in the heat Logan Fontaine who hit a 7:52.31 to improve upon his 7:57.25 PB in the event from a few weeks ago at the Canet stop of the 2021 Mare Nostrum Swim Series.

While he took the gold medal, Fontaine was a little bit slower than what he needed to auto-qualify for Tokyo which sits at a 7:50.28. That means that no men were successful in their goal of joining David Aubry who has already qualified for Tokyo in the event.

Joris Bouchaut followed in the final with a 7:54.67 for the silver medal while 2020 Olympic-qualified 10 km open water swimmer Marc-Antoine Olivier took the bronze in a 7:59.18.

Fanny Deberghes managed to pick up a second straight national title in the breatstroke here, adding to her 100 breaststroke victory earlier in the week. Desberghes jumped up from her 4th place finish during the prelims to swim a 31.80 for the gold. That was nearly a second faster than her morning swim of 32.36.

Justine Delmas also matched her finish from the 100 breast here, picking up silver in the 50 with a 32.17. That swim for Delmas was actually the exact same time that she swam during the prelims.

Delmas couldn’t quite crack 32 in the event but managed to hold off third-place finisher Auréane Devaluez who posted a 32.24 to nab the bronze medal. Solène Gallego and Maghan Foruin followed the leading trio with a 32.30 and a 32.32 for 4th and 5th, respectively.

It was absolutely down to the wire here as Jordan Ponthain and Jonathan Atsu battled it out, stroke for stroke, until the very last second. Ultimately, Ponthain pulled out the win with a 1:46.93, just 0.04 seconds ahead of Atsu’s silver medal-winning 1:46.97.

It looks like both men will be heading to Tokyo this summer to race the event individually as they both got under the FINA A and French qualifying standard of 1:47.02.

The duo will be taking over for 2 of France’s greatest swimmers over the past few Olympic cycles. Jeremy Stravius and Yannick Agnel swam the 200 for France at the most recent Olympic games, placing 11th and 19th place, respectively. Agnel is known for his incredible performance at the 2012 Olympics where he won gold in the 200 freestyle with a 1:43.14, setting a new French record that still stands today.

Considering that France is qualified to race the men’s 4×200 freestyle at the Olympics this summer, it is likely that they will also take 3rd and 4th place finishers to swim that race for them.

Fantine Lesaffre managed to get to the wall first with a 4:41.97 in the women’s 400 IM, picking up her first French title of the meet. While she won gold, Lesaffre was a bit slower than the French Olympic qualifying standard of 4:38.53.

Considering that Leasaffre has already qualified for the 200 IM and posted a 4:38.40 at the 2019 World Championships which was within the Olympic qualifying standard, there is a case to be made for her to contest the event in Tokyo. That decision will, however, at the discretion of the selection committee.

Lara Grangeon was a close second, finishing just over a second after Lesaffre with a 4:43.00 to take the silver medal. Grangeon, also slower than the Olympic cut, has not yet qualified for Tokyo in pool swimming, having missed the cut by a few seconds in the women’s 1500 freestyle earlier on in the meet. She has, however, qualified to race the 10 km open water event due to her 4th place finish in the event in 2019.

Leon Marchand got it done here in the men’s 200 butterfly and swam an Olympic-qualifying 1:55.40 for the French title. That was a big improvement for Marchand upon his prelim swim in the event of 2:00.51. Marchand has now qualified to race both the 400 IM and 200 butterfly at the Tokyo Olympics this summer.

Marchand’s swim was nearly a second faster than his previous PB in the event of 1:56.33 which he set earlier this year. Marchand continues to get closer to one of France’s oldest national record which sits at a 1:54.62 from Franck Esposito back in 2002.

Following Marchand, Swiss swimmer Jeremy Desplanches posted a 1:58.20 to shave a little bit of time off his 1:58.89 in the prelims. That’s still a bit slower than the 1:55.18 Swiss record that Noè Ponti recorded earlier this year at the 2021 European Championships.

Neither of the 2nd or 3rd place French men in the A final were able to crack the 1:56.48 Olympic cut. Matthias Marsau was the closest with his silver medal-winning 1:58.25 while Moyan Taylan wasn’t too far behind with a 1:58.64 for bronze.

Just as Marchand did in the 200 fly, Charlotte Bonnet was able to get her hand on the wall in a time fast enough to win a national title and qualify for the Tokyo Olympics. Bonnet swam a 1:56.67 which was under the 1:57.28 that she needed in order to make the trip to Japan this summer.

Bonnet did, however, contribute to the bronze medal-winning 4×200 freestyle relay back in 2012 and contributed a 1:57.78 in the final.

Assia Touati got just under 2 minutes in the final, hitting a 1:59.70 for the silver medal while Russia’s Anna Egorova notches a 2:00.31 for third place. Since Egorova is from Russia, the bronze medal will go to Lucile Tessariol who swam a 2:00.41.

Will Paris 2023 be too early for the next generation of the Manaudou dynasty?

I think that it will be a little fair for Paris 2024 for the French team. A result similar to that of Athens 2004 with an olympic title would be satisfactory(except if there are very good surprises in Tokyo).

Cool, completely unrealistic, but if it helps you to keep your hopes up …

Too crazy for me..

In every event there are at least 5 other guys with the same (or better) chance of winning the event in 2024 and that doesn’t include all the guys who will very likely emerge in the next couple of years.

Brouard and Marchand certainly seems possible, let’s see what the latter can do in the 200IM here. Grousset I think is optimistic: he’s developing nicely, and it was great to see him go under 48 at Euros. However, there are lots of very fast young guys in the 100 free with faster times: Minakov, Kolesnikov, Miressi, etc.; Dressel and Chalmers aren’t exactly ancient either. And that’s before you get to the even younger generation: Whittle, Popovici, the Korean guy (can’t remember the name, sorry), and so on.

Léon Marchand wins the 200 fly in 1.55.40. New PB.
Great rebound after slow prelims this morning.
He needs to be awake in Tokyo. Finals are in the morning.
Closer and closer to the national record of Esposito in 1.54.62 back in 2002!

It’s a little bit unfair to compare. No semifinals here. Very slow prelims. And no pressure in final like in USA.

I know perfectly, it was just a comparison. In early 2019 every comparison among Urlando (1.53.8) and Marchand in the 200 fly would have been impossible. Things in Swimming can change rapidly.

Swimmers develop later in France. Same in tennis.
There are some exceptions but it’s rare.

@Bobo: your obvious sentence about the impossible of make a real (homogeneous) comparison, reminded me when Phelps, at Nats 2015 (without semi) swam in the 100 fly final faster than LeClos had made a few days before at Worlds. LeClos pointed out the differences exactly like you made lol

I just don’t like compare 2 different formats.
It’s a fact that you are less fresh in final if you swim 2 rounds before.
That’s why it’s also a little bit unfair to Americans to compare Australian olympic trials with US olympic trials. Unless there’s a huge margin of difference that can’t be explained by semis or not. Example : the current women’s 200 free overall level in Australia compared to USA. Australian girls are just better. Semis or not.

All that you’ve written is extremely obvious and known, like I wrote before.. I just gave a reference between two results of the last 24 hours. I don’t think that Marchand is stronger than Urlando in the 200 fly: the French swimmer has just swum a time a little bit faster and I noticed that.

In some cases not having semis makes it harder. For example, middle distance freestyle in Australia is very strong. Elijah Winnington had to swim a hard 400FS in the morning followed by a hard 400FS that evening. The next day he had to do exactly the same in the 200FS. Would Keiran Smith in the USA have gone 1.45.29 if it was his fourth swim in two days?

I don’t know if France will follow the qualification procedure strictly, so is there any chance for Marchand to swim 200 fly in Tokyo, if he gets the finals standard tonight? Considering he’s already qualified.

Good question. I’m not aware of that.
Let’s see if he wakes up tonight and swims 1.55.

He is already qualified for tokyo so he can swim it I think, 1.55.4 is solid comparing to the us and aus