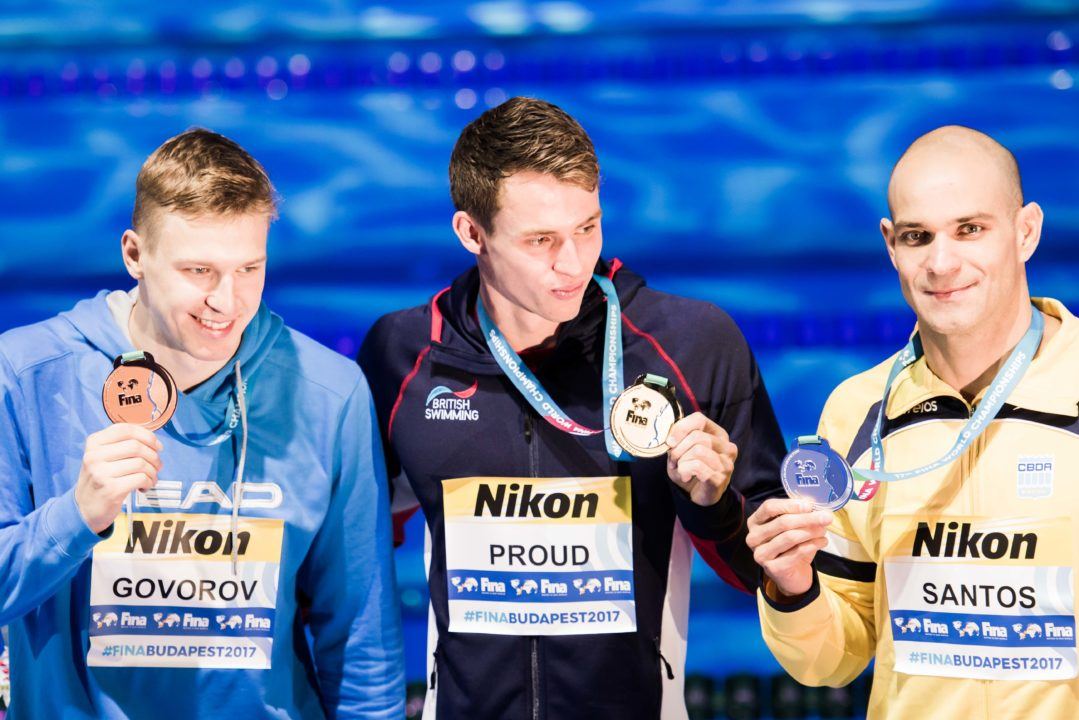 This year’s Worlds edition of the men’s 50 fly features many of the top 8 returning from 2017, with many new faces looking to contend for a medal. With the event progressively getting faster each year, Milorad Cavic‘s 2009 championship record will be in jeopardy with the epic battle to come later this month.

One veteran that was originally appeared missing from this year’s meet is 39-year-old Brazilian Nicholas Santos. However, on June 8th FINA sent a special invitation to Santos to attend this year’s meet. Since Brazil’s selection was based off Olympic events, Santos missed the cut since his primary specialty is the 50 fly. Yet FINA recognized his exceptional performance at the FINA Champions Series, where he swept all 3 stops in the event. The Brazilian federation accepted this invitation, verifying Santos will swim in Gwangju later this month.

Santos has performed very well in this event in past Worlds appearances. Santos won silver two meets in a row in 2015 and 2017, along with just missing the top 3 in 2013. At the 2018 SC World Championships, Santos became a world champion in the 50 fly for the first time since 2012.

Two months before that, Santos broke the SC world record at the Budapest World Cup with a 21.75. Santos currently holds the top time in the world this year with a lifetime best of 22.60, from the Budapest stop of the FINA Champions Series. That time is also the second-fastest time in history.

Making this year’s race even faster than before is current LC world record-holder Andrii Govorov of Ukraine. In 2018, Govorov broke the 2009 super-suit world record with a 22.27 at the Sette Colli Trophy meet. He later backed up his world record with a gold medal performance at the 2018 European Championships, where he won with a 22.48. Govorov’s best finish at Worlds was a 2017 bronze medal after previously finishing 5th twice in 2013 and 2015. This year, Govorov’s season best sits at 22.82, which is third in the world.

Returning as the reigning 2017 world champion is Great Britain’s Ben Proud, who beat out Santos by 0.04s in the Budapest World final. Proud has progressed a lot in this event at Worlds, starting from 11th in 2013, then finishing 8th in the 2015 final all the way to winning in 2017. As of 2018, however, Govorov appears to challenge Proud’s chances of defending his title. At the 2018 European Championships, Proud was runner-up to Govorov by three-tenths of a second. This year, Proud is 6th in the world with a 23.09 with his lifetime best standing at 22.75. However, Proud holds the second-fastest 50 free in the world at 21.48.

Russian teammates Oleg Kostin and Andrey Zhilkin could be potential forces to break up the 2017 top 3 finishers. Both swimmers were the top 2 finishers at the Russian Championships back in April. Kostin comes as the 2nd-fastest time this year, swimming a lifetime best of 22.74, 0.14s behind Santos’ LTB. In 2017, Kostin missed semi-finals and finished in 17th place. However, Kostin bounced back and earned a bronze medal at the 2018 European Championships behind Govorov and Proud. Zhilkin, on a similar note, has begun to build a name for himself for Team Russia. At the 2017 World University Games, Zhilkin took a silver medal at the meet. This year, Zhilkin is the 5th-fastest swimmer in the world with his national runner-up performance time of 23.06.

Representing the American squad this year is 7-time World champion Caeleb Dressel and LC Worlds newcomer 20-year-old Michael Andrew. At the 2018 US Nationals, Andrew upset Dressel not once, but twice in both the 50 fly and the 50 free. In the world rankings, Andrew ranks 7th at 23.11 while Dressel sits in 9th with a 23.24. Looking at their lifetime bests, Dressel’s 22.76 is nearly two-tenths faster than Andrew’s 22.93.

The difference between Andrew and Dressel are their Worlds championships successes and event versatility styles. Andrew is still relatively new to the senior international level after his many successes as a junior with his 4 world junior titles. At the senior level, Andrew has won just one individual world title, which came in the 100 IM at the 2016 SC World Championships.

Dressel, on the other hand, exploded onto the senior international level in 2016 with his two relay golds at the Rio Olympics. After his massively successful NCAA career, Dressel continued his momentum into the 2017 Worlds Championships. There, Dressel won an impressive 7 golds, three of them individual titles. At the 2017 Worlds meet, the 50 fly was the one event that stopped Dressel from hitting 8 golds when he finished 4th in the final.

But what may give Andrew the upper-hand in the 50 fly over Dressel is their event styles. Since going pro, Andrew’s specialty lies within the 50s, arguably making the 50 free/breast/fly his best events. Dressel, on the other hand, has expanded his repertoire from the 50/100 free and 100 fly to reach the 200 IM/free/fly and even breaststroke.

The Americans have not medalled in the 50 fly since Eugene Godsoe‘s silver medal performance in 2013. Dressel and Andrew this year have the opportunity to rejuvenate the American streak in this event. While two different swimmers, Andrew and Dressel each have their own talent that makes them equal in opportunity. Andrew’s incredible sprint endurance should aid him to success in all his individuals. Meanwhile, Dressel’s 2019 performances, including his world-leading 50.36 100 fly, could propel him to another successful Worlds bout.

Speaking of 2016 Olympians and successful NCAA swimmers, Singapore native Joseph Schooling certainly has an opportunity for himself to bounce back from staying quiet after his Olympic title in the 100 fly. In his most recent international appearance at the 2017 Worlds meet, Schooling placed 5th in the 50 fly after finishing 7th in 2015. At the same meet, Schooling earned a bronze in the 100 fly.

However, the 2018 Asian Games proved Schooling had unfinished business by going on to win the 50 and 100 fly at the meet. This year, Schooling’s 50 fly is only ranked 23rd in the world at 23.48. Yet his personal best is tied with Michael Andrew‘s LTB of 22.93.

It would be hard to forget Hungarian Laszlo Cseh, still swimming strong at 33 years old. Cseh is best known for being runner-up behind his American IM/FL counter-part Michael Phelps. However, since Phelps’ retirement, Cseh has begun to truly exhibit his dominant butterfly talent. At the 2015 Worlds meet, Cseh earned his second-ever world title in the 200 fly in 2015, alongside his 2005 title in the 400 IM. The 50 fly, on the contrary, has not been a strong-suit of his. In 2015, arguably his most successful Worlds meet, Cseh earned bronze in the 50 fly. Later in 2017, Cseh fell to 11th in the 50 fly semi-finals while earning a silver in the 200 fly.

Dark Horse: Frenchman Mehdy Metella is a well-rounded sprinter, becoming a great relay asset for Team France. Although just ranked outside the world top 25 in the 50 fly, Metella comes with great Worlds experience. Alongside his 400 free relay gold from 2015, Metella earned bronze in the 100 free during the 2017 edition of the Worlds meet. At the 2018 European Championships, Metella earned bronze in the 100 free while bumping up to silver in the 100 fly. With his individual events moving up in this Olympic quad, Metella certainly has an equal shot at earning a finals spot in the 50 fly.

Wouldn’t be surprised to see Dressel win; for some reason, maybe because he doesn’t swim this event often, he doesn’t seem to have shown his full potential yet. If you extrapolate from his best 50 free and 100 fly times, he really ought to be at least 22.5-ish.

Also, not sure why you characterized Andrew as a “50 free/breast/fly” specialist. I’m pretty sure his best 50 back is closer to the WR than his other 50’s are.

Govorov’s a little bit of a question mark. Last year he was a force of nature; this year he may be a little distracted by the new baby, and who knows, it’s possible that after getting the WR he took his foot off… Read more »

The 50 fly is such a different event than the 100 fly. It’s so shoulder-driven by these brutes like Santos, Govorov, and Santos. And it’s a no-breath 50. Dressel is terrific at the every other breath fly (I realize he no-breathes at the end) he uses on the 100, but the undulation and body dolphin whip is something he relies on to make his 100 fly so special. He’s got the start, but so do the other three. It’s the opposite of MA in freestyle — he’s so much better when he doesn’t have to breathe in a 50 than when he does in a 100. I’d be surprised if Dressel won, but not if he medaled.

Good observation – the stroke being raced in the 50 fly is almost unrecognizable from the one in the 100 fly.

Exactly why it’s frowned upon by many swimming traditionalists

Sarah Sjostrom is a good example of this.

She has great upper thoracic mobility though. She can get a chest press in even when looking like she’s swimming flat. https://www.youtube.com/watch?v=o1cwH4EDlsY

With Santos being so dominant you had to mention him twice 😀

I agree with Dressel too. in 2017 final, he came up short on his breakout, he was 1/2 body behind leaders and still managed to get his hand on the wall in the leader pack. No doubt Dressel has more to his 50 Fly should he nail his start and breakout.

Troy said at a recent ASCA talk that Dressel’s hand slipped on grease under the block. He relies on the “grip it and rip it” arm pull, so it affected him in the final.

Yeah it was weird to see his time go from 22.76 to 22.89 in Finals when he dropped time in all of his other events from semis to finals

Govorov has been shaky this summer. I don’t see him medaling!

Old man power for the win

Honestly, because I forgot about him haha.

LeClos, great off the blocks, should be a finalist. Weird his picture is in the “In This Story” part, but not mentioned in the article.

Good thing for all of them Manaudou won’t be at worlds. I’d say this could be Andrew’s best shot at individual gold.

Our sources are telling us that Le Clos isn’t expected to swim this race.

He might do it as a split request going out for one of his insane fly-or-die 200 frees.

Manaudou ever have a good LCM 50 fly? I can’t recall one. A beast at SCM 50 fly though.