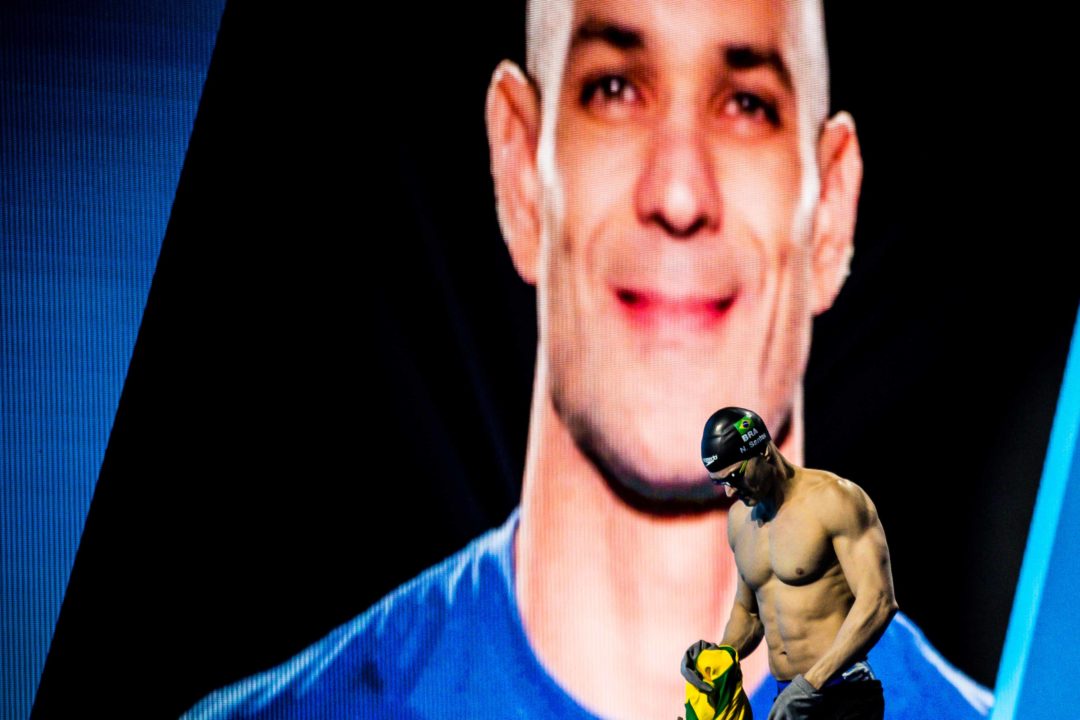 The 39-year old Santos will swim at the World Championships after all, in spite of being left off Brazil's initial roster announced in April. Current photo via Jack Spitser/Spitser Photography

Brazilian swimmer Nicholas Santos has received a special FINA invite to participate in the 2019 World Aquatics Championships that will take place this summer in Gwangju, South Korea. In a letter sent to the presidents of the country’s regional federations, the Brazilian Confederation of Aquatic Sports (CBDA) informed the country’s swimming community that they had accepted the invite, and that Santos would be added to the team.

Brazil selected its World Championship team of 20 based only on results of Olympic events, and the 39-year old Santos, who specializes in the 50 meter fly, was not chosen in those events. That’s in spite of swimming a 22.77 at the Brazilian Championships (Maria Lenk Trophy) that ranked him 2nd in the world at the time (he now ranks #1).

However, in recognition of Santos’ high potential for a medal (and likely his continued and consistent participation in major FINA events like the World Cup Series and FINA Champions Series), FINA reached out to the CBDA via email to request that the CBDA add Santos to their roster.

“Following the excellent performance of the swimmer at the FINA Champions Swim Series 2019, FINA has the pleasure of inviting Mr. Santos to take part at the FINA World Championships to be held in Gwangju in July 2019.

Accordingly, we would appreciate it very much if CBDA enters Mr. Santos taking into account, of course, the FINA Rules on the numbers of swimmers with A & B times.

On the other side, we took note of the financial conditions for Mr. Santos. Still, please nonte that arrangements will be made so he stays together with the rest of the Brazilian Swimming designation.”

The letter is signed by Cornel Marculescu, the Executive Director of FINA.

The CBDA, in explaining its decision, says that it, “in condition of affiliation to FINA, has the highest regard for the decisions issued by (FINA), always seeking to be in accordance with the resolutions and determinations published by it.”

The key for the CBDA is that the full cost of Santos’ participation will be borne by FINA and Santos’ sponsors. The CBDA is under extreme financial pressure after the fallout from a massive corruption scandal that resulted in charges being filed against the long-time head of the CBDA Coarcy Nunes.

To make room for Santos, the CBDA had to adjust their roster: specifically, Gabriel Santos (no relation) withdrew from the 50 fly, in which he had been entered. The CBDA says that this withdrawal was coincidental: Gabriel Santos will instead focus on the prelims of the 400 free relay, which falls in the same session as prelims of the 50 fly. The semi-finals of the 50 fly also falls in the same session as finals of the 400 free, and the Brazilian men have a chance at medaling in the 400 free relay.

Nicholas Santos has proven ageless, swimming his best times in the 50 fly late into his 30s. He won silver medals in the event at both the 2015 and 2017 editions of the World Championships, and adds to that a total of 10 Short Course World Championship medals.

He also won the 50 fly at all 3 stops of the 2019 FINA Champions Series, which wrapped last weekend in Indianapolis. He swam a 23.01 in Guanzhou, China; a 22.60 in Budapest, Hungary; and a 22.94 in Indianapolis. The 22.60 is the South American Record in the event, and ranks him as the 3rd-fastest swimmer in the history of the event.

This is the first announced instance of the governing body attempting to sway a national selection, though in 2015 Marculescu said that “we can do whatever” with regards to extending Michael Phelps a special invitation to compete at the World Championships even without qualifying for the team.

ATHLETES (events where their qualification was earned)

Sadly, while I think we all want to see Lazor and Urlando compete, FINA can’t force the USA kick people off the roster to make room for them. That’s unfair to the swimmers already competing. You notice they specifically mentioned that Brazil barely had to adjust their roster at all.

just one year to wait to see them both on the Usa Olympic Team …..

I wouldn’t be surprised if FINA gave the US permission to sub them in like they did with Phelps in 2015. But the US will (or already did) decline out of a sense of fairness to the athletes who would be bumped after properly making the team. Personally, I think it’d be pretty cool if they kept the Worlds team open for anyone who can post a top 3 time.

It would be cool but it would so take out the element of swimmers having to get it done when it counts.

….and it would mean changing the rules of the game after the game has already been played. (Which is not to say that those rules are ideal.)

In the US it would actually be illegal to bump people in that manner. That’s part of the Ted Stevens Amateur Sports Act – they have to follow the stated selection procedures.

Happy to see him, but very strange.

Leader of the World ranking and winner of every 50 fly in this season. It would have been quite bizarre if Nicholas Santos, because of financial issues, could’t swim at Worlds, so: well done Fina.

Exactly. I don’t care about the mixed relays. I want the pure sprinters to get some love.

Interesting to see the votes here. Most people want the stroke 50s. I don’t agree but it seems likely to happen. Are we dropping the 200s to make room?

We don t get to type that very often!….Both a great and odd decision..

Confused why adding a swimmer to the 50 fly meant a swimmer had to be removed from the 50 free?

FINA made a decision I actually agree with. Now I’m going to have to check the skies all day for four horsemen…