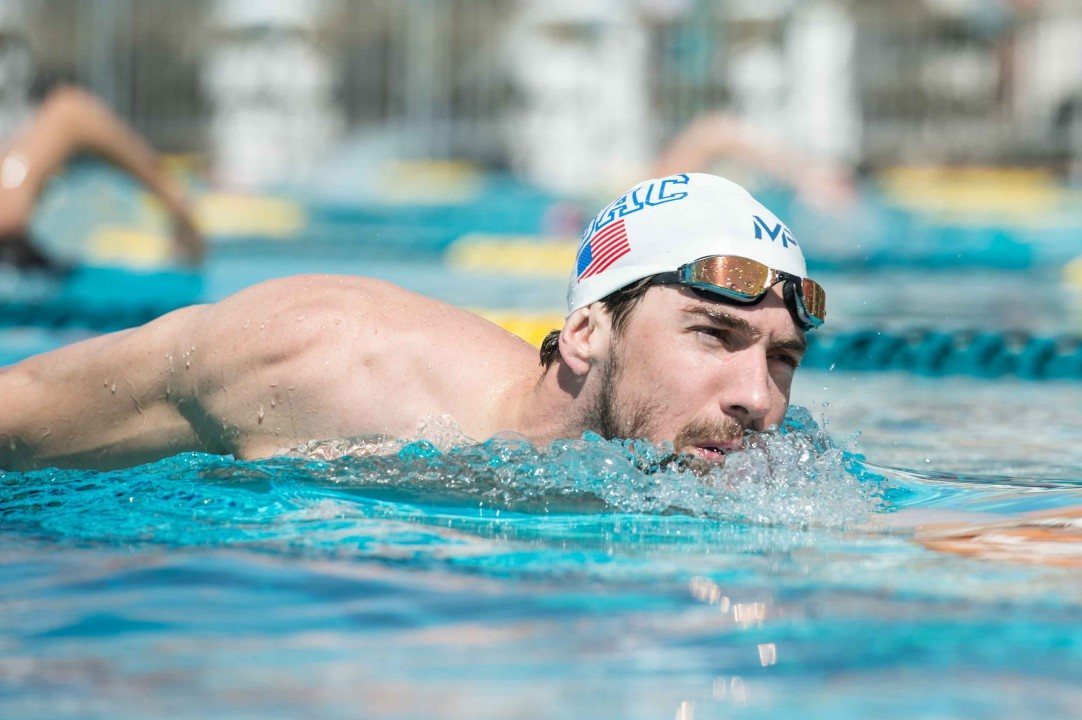 Phelps says he will not be swimming at Worlds, but FINA has other ideas. Current photo via Mike Lewis/Ola Vista Photography

Just a day after Michael Phelps’ press conference in Mesa, Arizona where confirmed he would not be competing at the 2015 FINA World Championships in Kazan, Russia, the world’s swimming governing body inserts its own line of thinking on the greatest Olympian’s participation.

On Wednesday of this week, Phelps reiterated that he would not be competing in Kazan, Russia, avoiding the displacement of swimmers selected in his absence due to a USA Swimming-imposed competition suspension. However, FINA Executive Director, Cornel Marculescu, told the Associated Press today that “it would be no problem for us to offer Phelps an extra place [at worlds]”

And how exactly would this transpire?  “We may give him another status because he’s the greatest athlete (in) history,” Marculescu said. “We can do whatever. He is the No. 1. He doesn’t need the accreditation.”  (ABC News)

Marculescu indicated that FINA has not yet discussed the notion with USA Swimming and one would be hard-pressed to find precedent on a similar situation.  Thus, it is yet to be seen if any action will indeed be taken by FINA to enable the greatest Olympian of all time magically eligible to swim at the event.

Even if the matter of adding Phelps is impractical and would take a very special case, these comments, rather, are more a referendum on the attitude of the FINA Executive Director and his opinions on the value of Phelps to the swimming brand as a whole.

I just imagined a scenario in which Phelps was given the ability to draft his own team of swimmers from varying countries around the world. He somehow gets all the fastest swimmers to defect loyalty from their country and they sweep every event as members of “Team Phelps” or perhaps some other creative team name like “The Dragon Sharks.” I feel like this FINA guy would actually enjoy that very much.

I hate FINA as much as everyone else and can’t imagine MP accepting an arbitrary slot for all the reasons above. It’s just not the way we do things. However, what could Phelps command for an appearance fee from FINA/Russia? Remember that they’re hoping for a 4.5 billion TV audience (not a typo) and are holding this thing in a soccer stadium in a Russian city that isn’t Moscow or St. Petersburg. The Phelps effect would be massive to Russia’s equivalent of NBC. In his prime Tiger Woods made $3 to 5 million for an appearance fee…..MP would be worth that to them, wouldn’t he? I hope they don’t go doing any backroom dealing but with FINA it wouldn’t surprise… Read more »

I normally don’t agree with FINA, but this is an interesting idea. Don’t see it happening, but wouldn’t totally mind if it happened. Come on guys, lighten up.

Personally I’d like to see MP swim — but this isn’t a FINA issue. FINA can’t place him on Team USA. If FINA invited him individually, would he be unattached?!

I have a different theory on this — perhaps FINA released this statement as a way to ease the way for USAS to reinstate MP b/c that’s what would have to happen for MP to swim Worlds.

Props to the guy a few comments up who referred to FINA’s Cornel Marceluscu as “corny”. Hope that sticks.

Also- it’s the job of the international federation to come up with minimum standards for participation in their World Championship/World Cup/Olympic competitions. From there, it should be up to individual federations to determine who to send to those events.

As long as the civil rights provisions of the Olympic charter are met, each individual member nation should retain the right to select their international teams in the manner they choose without interference from the international governing body. Even if that member nation seems to have confusing, arbitrary (Oh, Canada!) or just plain stupid ways of coming up with that team.

If you haven’t already read the comment by “Hulk” under the article “Welcome Back…Michael Phelps Warms Up in Mesa”, it’s very funny, and I’m sure he could do this better, but I’ll try:

Hello, this is Michael Phelps reporting from the World Michael Phelps Championship in Michael Phelps, Russia. As you know, Michael Phelps was invited to participate here, despite his punishment by USA Swimming, by the President of FINA, Michael Phelps. It’s now time for the Men’s 4×100 Medley Relay. Michael Phelps, who has won 8 individual gold medals, is the top seed in lane 9, the special “Michael Phelps” lane added to the pool so he can swim any event he chooses. He is representing the nation, Michael… Read more »

I agree with poster above that said MP would not want to swim under some special FINA invite. From all I’ve ever heard, Michael is a great TEAM player on Team USA. The only way he would swim at Worlds is if Team USA chooses to reinstate him.

What was slightly unclear to me yesterday was whether MP was saying emphatically that he won’t swim Worlds under any circumstance (even if eam USA wants him back) . . . or was he simply saying “I’m not SEEKING a spot on the team” — i.e., I’m not going to lobby for it, but if Team USA puts me back on, then I’ll swim for the team.

Phelps made a public statement yesterday. If he went back on that- he’d get way more criticism for going back on his word. Regardless of whether he knew about FINA’s stance- he shouldnt swim in Kazan anyways. Also- the punishment seems like something USAswimming is reinforcing-fina isn’t really involved.