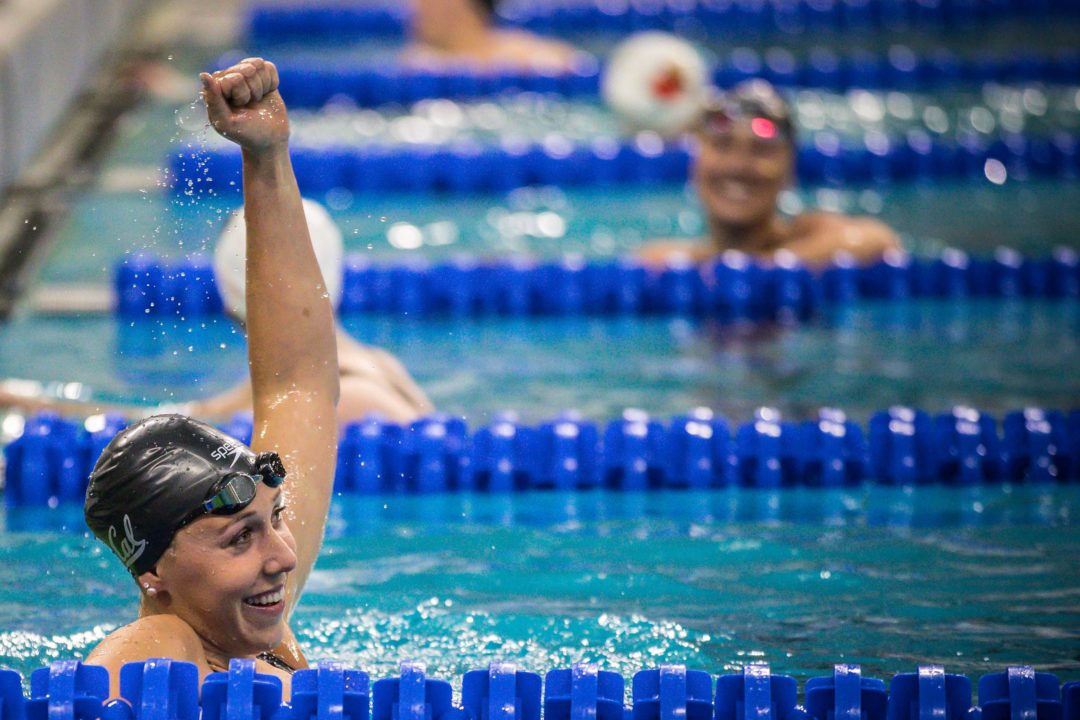 Cal was under Stanford's American record, but Abbey Weitzeil was swimming with her armed wrapped, so the record is not official under USA Swimming rules. Current photo via Jack Spitser/Spitser Photography

Bolstered by a 46.07 anchor split from junior Abbey Weitzeil, sporting a wrapped arm as a result of an “awkward” finish to her fastest ever 50 free relay split on the 200 medley relay Friday night, the Cal Bears broke the NCAA record in the 400 free relay Saturday night.

Because of Weitzeil’s arm tape, however, Rowdy Gaines reported on ESPN that this is not an official American record – we’re still waiting on confirmation as to whether or not it is an American record.

What a gutsy swim for Weitzeil

any word on what tape has to do with an American record?

Exactly. If tape has something to do with the American Record, then it shouldn’t even be a NCAA record also.

I’m not 100% sure, but I would imagine that USA Swimming and the NCAA may have different rules on what sort of wraps are permissible. I know that’s always a “fun” topic of conversation in high school swimming.

Indiana high school doesn’t allow “jewelry.” It made a bit of a story when a diver was dq’ed at state for wearing a scrunchy. There are too many silly rules with stuff like this.

When did that happen? This rule has since been changed nationally, though I’m not sure if Indiana has hung on to it.

I guess they’re afraid of shark skin medical wraps and a sudden influx of injuries. Not accusing Abbey, in fact I thought she did an incredible job.

Any type of Elastic Therapeutic Tape
Any type of Kinesio Tape
Any other type of taping that may support the muscles, ligaments, or tendons and/or provide compression to a joint that isn’t explicitly stated.

I’m guessing this isn’t an American record as the relay would have been disqualified. I don’t know enough about NCAA rules to comment.

Here is a SwimSwam article about it:

We actually asked USA Swimming this morning in anticipation of just this issue. They’re still working on getting us an official answer.

USA Swimming says that “the rules allow for tape if the referee allows it,” indicating that the record would count. We’ll provide an update when it’s officially ratified, but that’s the word for now.

I think it might have been ruled as an American record this afternoon: https://www.usaswimming.org/news-landing-page/2019/03/24/stanford-wins-third-consecutive-title-in-record-setting-final-day-at-ncaa-championships