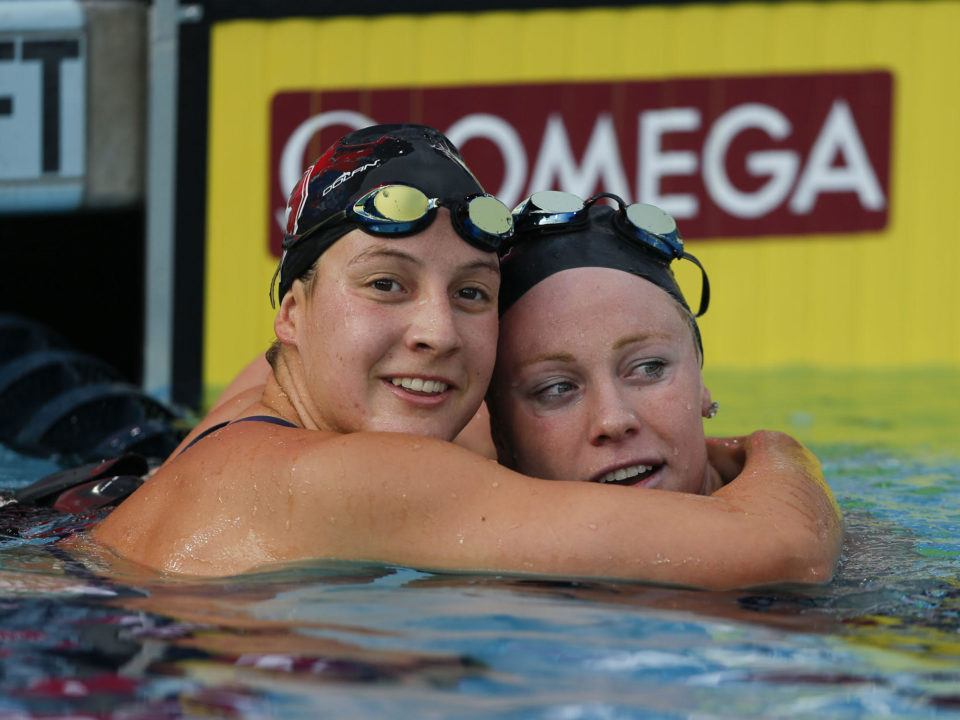 Ella Eastin's 2018 400 IM performance at this meet last year was perhaps one of the most stunning in college swimming history – from breaking every record in the books by multiple seconds to handing Katie Ledecky what's likely the biggest loss margin of her career.

Ella Eastin‘s 2018 400 IM performance at this meet last year was perhaps one of the most stunning in college swimming history – from breaking every record in the books by multiple seconds to handing Katie Ledecky what’s likely the biggest loss margin of her career. It’ll be hard to top this year, but Eastin has continued her stellar run this season, fully taking over the spotlight as Stanford’s star.

South Carolina’s Emma Barksdale is the next-fastest seed with her season- and lifetime-best of 4:01.52. She came into the 2019 SEC Championships with a PR of 4:05.43, then went 4:03.96 in prelims and 4:01.52 in finals. Last year, she gained a few tenths between SECs and NCAAs. Indiana’s Bailey Andison also touts a best time swum this season, going 4:02.37 at Big Tens last month. Andison is in her first year with IU after transferring from Denver, so it’s hard to project exactly how she’ll hold up that taper between Big Tens and NCAAs in a new training program.

We’ve picked Stanford junior Allie Szekely, the No. 14 seed, to round out the A-final. No one else entered has been sub-4:05, and even a relatively off performance would keep her in the top eight. Yes, we’re banking on her bouncing back from last year’s sophomore slump, but her upside is too strong to ignore.

Dark horse: Northwestern sophomore Calypso Sheridan. She was 22nd at last year’s NCAA Championships, but is the No. 12 seed this year. She swum a lifetime best 4:05.93 at Big Tens last month, as well as in her 200 IM, 200 breast and 100 back; she also went a 100 breast best in a March 1 last chance swim. For what it’s worth, she dropped half a second between conference and NCAAs last season, and seems to be in great shape, judging by a five-second drop in the 400-long-course-meter IM at the Des Moines Pro Swim Series between Big Tens and NCAAs.

No love for McHugh? Maybe this will be her big year in the SCY 400 IM

With the caveat that she was clearly not tapered for Big Tens, she was only 10th at that meet. I personally would’ve put her top 5, but I think that swim scared me off her. She’s definitely got a chance at an A final, she’s certainly a talented enough swimmer for it, but just couldn’t make a better case for her than the swimmers listed ahead of her who all have lifetime bests in the 4:03 range.

Sheridan may be top 4 if she can hold off Barksdale.

Andison will be close to breaking 4:00 if not under. I think she’ll be 4th at worst

I bet Forde and Pickrem don’t love this headline.

See I would love this headline. Makes me want to be an underdog and try to beat them

They probably don’t read these