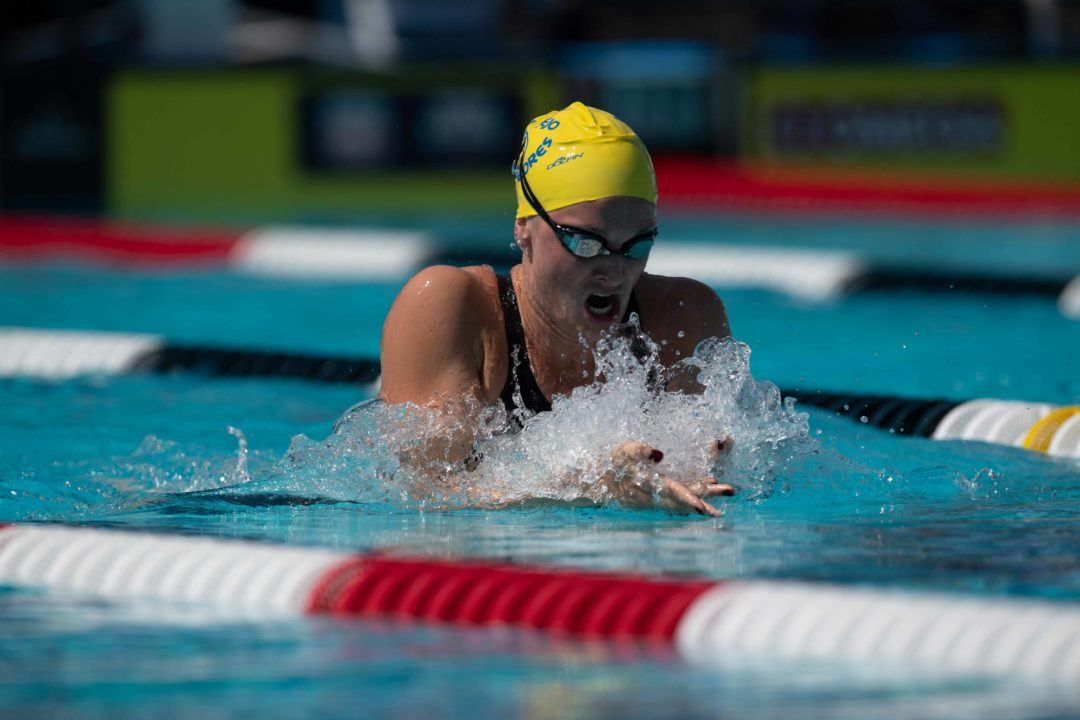 Annie Lazor picked up her 2nd personal best as in many days with a 2:23.51 victory in the 200 breast on the third night of the 2019 PSS - Knoxville stop. Current photo via Mike Lewis/Ola Vista Photography

Annie Lazor, who had a surprise 3rd-place finish at last summer’s Summer Nationals and won gold at Short Course Worlds, has been showing some new year’s speed. Last night, she recorded a personal best in the 100 breast,  and tonight she knocked almost a second off her lifetime best in the 200 breast as she won with a time of 2:33.51. That’s the 2nd-fastest time in the world since last summer’s big meets, coming in only behind Runa Imai‘s 2:33.50 from last September.

She won by almost exactly three seconds over a field that included Micah Sumrall, last summer’s national champion in the event, who touched in 2:26.50.

Lazor’s career has taken on new life after she took a break following the 2016 Olympic Trials. Since then she has trained briefly with John Hargis, her former coach at Auburn, but has settled in as part of the growing post-grad group at Indiana, under Ray Looze. That groups includes fellow breaststroker Cody Miller, and Indiana also current undergraduates Lilly King, who holds multiple world records and has gone 6-for-6 in NCAA breaststroke evens, and Ian Finnerty who won last year’s NCAA title in the 100 breast with the fastest time ever.

With tonight’s swim, Lazor now becomes the 6th US woman to break 2:24 since the Rio Olympics, solidifying her spot as one of the top contenders for the 2020 Olympic team.