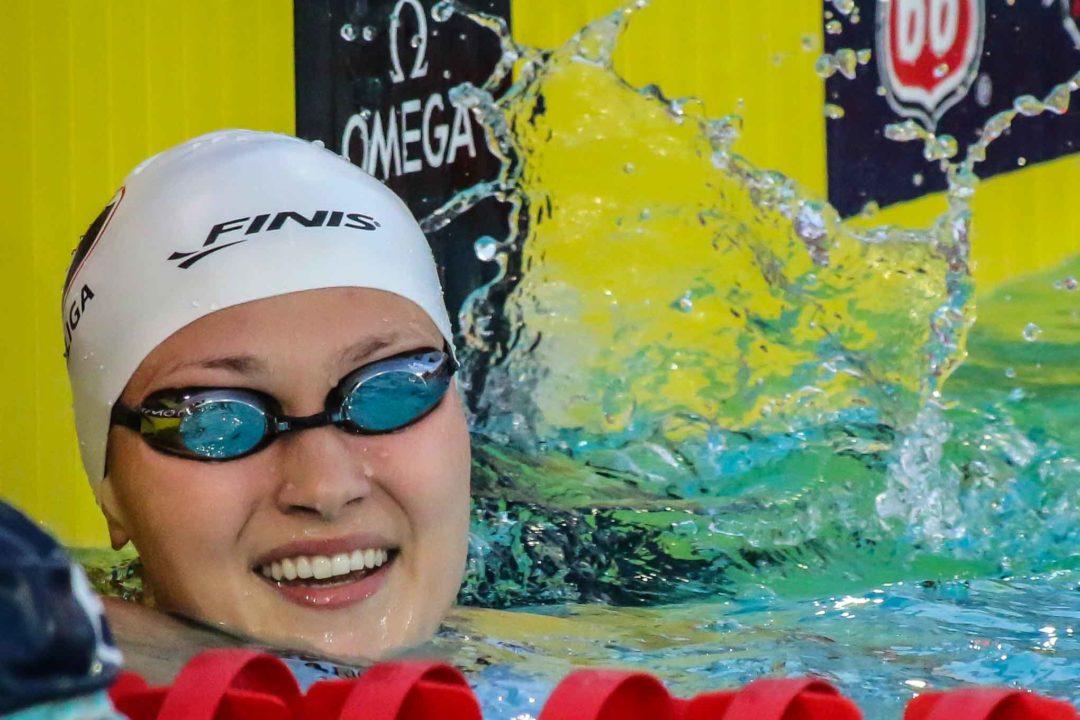 It was a fast start for Cammile Adams's team in USA Swimming's SwimSquad Battles. The Adams Family outscored the other three teams by 10 points to take an early SwimSquads lead. Archive photo via Jack Spitser/Spitser Photography

It was a fast start for Cammile Adams‘s team in USA Swimming’s SwimSquad Battles. The Adams Family outscored the other three teams by 10 points to take an early SwimSquads lead.

In our pre-meet projection, we noted that Adams moved from perhaps the lowest post-draft stock to having the best starting lineup in Knoxville, and that held true. She scored 101 points, with DiRado running second after a strong Knoxville effort:

Adams had no 20-point starters, but there were only three 20-point swimmers in the entire field. Adams’ team was deep, though, each earning at least 16 points – that means every one of her swimmers averaged two second-place finishes or better.

DiRado had two of the three 20-point swimmers in the field, and would have had three if Chase Kalisz had swum the 400 IM. That makes us stand by our post-draft analysis that the DiRadSquad is the team to beat across the series as a whole. Those 20-pointers (Ryan Murphy and Simone Manuel) made up for relatively weak points performances from Kalisz in the IM slot and DiRado’s flex play.

Jaeger got the other 20 from Katie Ledecky (shocker, we know). But he only scraped out 6 butterfly points thanks to an 8th-place finish from Tom Shields in the 50 fly. That may have been partially caused by the meet’s lineup, which put the 50 fly in the same session as the 200 fly, where Shields was 6th.

Beisel brings up the rear early in the series, mostly due to a big miss on Kevin Cordes‘ 200 breast. We had projected Cordes as a starter in the 50 and 100 breast, where he scored 13 points. But Beisel started him in the 100 and 200, perhaps looking towards a weaker 200 field. Cordes scratched the event and only wound up with 5 total points. Hali Flickinger and Michael Chadwick each won races, but an eighth-place finish from Kathleen Baker in the 100 back doomed the backstroke spot to just eight points. Hard to fault Beisel for that, as you can’t exactly leave the world record-holder on your bench.