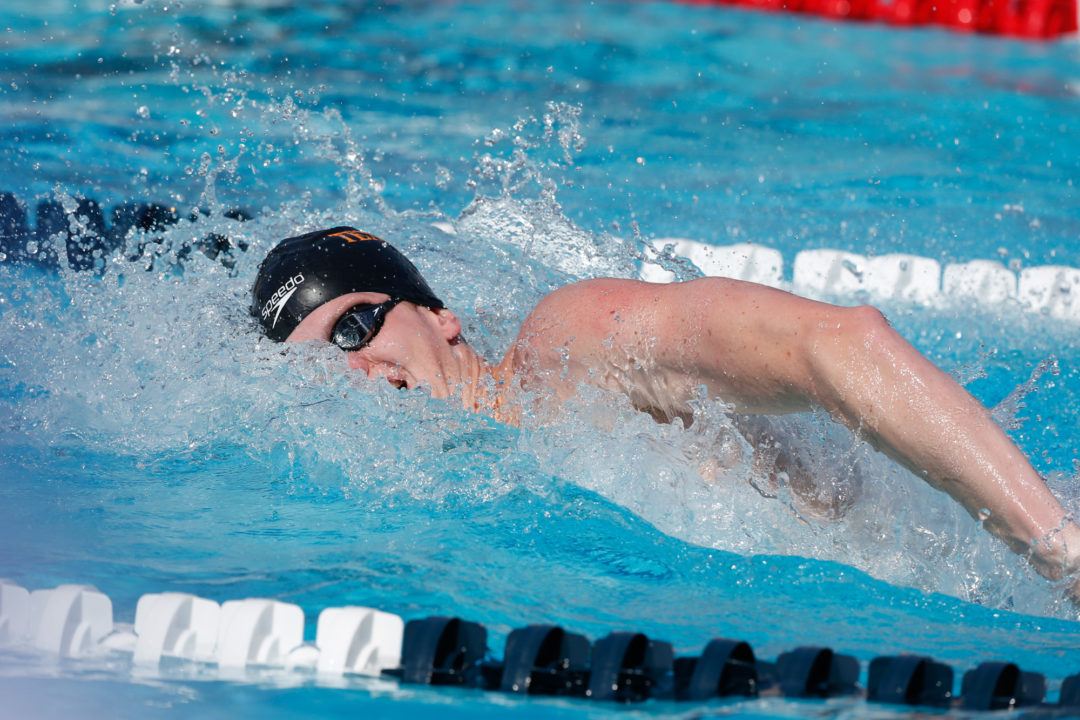 The official psych sheets for the 2019 Men’s NCAA Swimming & Diving Championships have been released. The cut line is in the middle of line 31, meaning all of the 30th-ranked athletes got in, while a handful of 31st ranks made the invite cut as well.

A few key changes have shaken up our invite projections a bit. First of all, Texas has already culled its swimming entries down a bit. We had 20 Texas swimmers projected to make the invite cut, which would go over the NCAA roster cap of 18. It appears Texas has cut freshman Andrew Koustik and junior Josh Artmann. We had Koustik projected to make the invite cut in the 200 fly, but he was the team’s lowest invited seed at 28th. Artmann was projected 25th in the 200 back. Texas did choose to keep 27th-seeded 500 freestyler JohnThomas Larson on the roster, along with 24th-seeded 200 flyer Max Holter and 24th-seeded miler Jack Collins.

Texas will have to make more cuts in the coming weeks, though. They’ve qualified 3 divers for NCAAs already through the Zone D Championships. Divers count as half a roster spot, so Texas will need to either cut 2 more swimmers or 1 swimmer and 1 diver.

The other factor shaking up our projections is the addition of Penn State sophomore Gabriel Castano to the psych sheet in the 50 free. He wasn’t included in an earlier draft of the psych sheet, but is ranked 12th with a time put up at the Big Ten Championships. His inclusion bumped out Alabama’s Sam Disette and Harvard’s Raphael Marcoux, who were tied for 30th but are now tied for 31st. Those two are the second and third alternates, behind Alabama’s Nicholas Perera, whom we had projected as an alternate.

Here’s a simplified look at what the last minute switchups (Texas’s two scratches and the addition of Castano) did to our invite projections:

Alabama’s Perera is almost a lock to get in as an alternate, with two more Texas cuts likely coming to make room for divers. The second alternate spot is a tie between Marcoux and Disette. The NCAA pre-championships manual says that a tie-break would come down to each swimmer’s second-highest-ranked event on the pre-cut psych sheets – using that time, the NCAA will calculate the percentage of that time to the “A” standard, with the swimmer closest to the A standard getting the invite.

Marcoux has two more swims on the precut psych sheets, a 42.9 in the 100 free and 46.4 in the 100 fly. Disette has no other entry times listed, and his 100 free and 100 fly times are slower than Marcoux. That would suggest that Marcoux is the second alternate, and very likely to be called up to the NCAA meet when Texas makes their scratches.

You can see our full psych sheet scoring breakdown here.

45 teams had athletes get invited in swimming. Texas leads with 18 (currently). Florida has 15 swimming invitees, Cal has 14, Missouri, Virginia and Stanford 12 each and Michigan and NC State 11 each. Indiana is the other double-digit invite team with 10.

I wondered why Castano wasn’t on a first sheet. 19.2 is legit scoring chance.

19.2 is real close to get into a final and then maybe even top 5

19.2 wont even make B-final…not sure what year you’re living in

you’re about 15 years to late with your expectations 19.2 barely b finals anymore

Who are you talking about? The only two PSU guys that look like they should have gotten an invite are Castano and Daly and they’re both invited…

Braden, thank you for the explanation.

What decides the tiebreak between Disette and Marcoux when it inevitably comes to that?

Reid – I did some digging myself and added the info to the story. In short, it comes down to how close each swimmer’s second-best event is to the NCAA “A” cut. Marcoux is much better at the 100 free, so he would be the second alternate selected, with Disette third.

Interesting how Indiana has less swimming invitees than like 5 teams they are expected to vastly outscore in swimming.

Didn’t one of the Dolan-era Michigan teams win with a 7-man squad? What’s the next smallest team to win?

PREDICTION: all NCAA A finalists will qualify with 18.xx swims

Could be. Howard, Jackson, Sendyk, Decoursey all under so far this year. Becker, Ress, Hoffer, Apple, Sendyk have been before. Borges and Sorensen’s 19.1 bests were from midseason. I don’t feel like Dobbs was fully tapped out for Pac-12s. And of course there in the Dean.

16
0
Reply
Swammer
Reply to  JP input is too short

Then there’s Ress who’s been 18 and Nyls who may be just a freshman but should drop and molacek. I know there all state people but they are fast sprinters and you didn’t mention them. DONT call me DIEHARD NCState fan.

5
-7
Reply
JP input is too short
Reply to  Swammer

I did mention Ress.

But what about Ress? He’s been 18 before.

but why male models?

3
0
Reply
Swammer
Reply to  JP input is too short

Not entirely. It will give context after the meet when comparing which teams performed well against their seed and which didn’t, what impact diving had, etc. Certainly relevant information.

I mean obviously that’s not how it’s actually gonna look. But I just did it for fun and thought someone else might find it interesting.

Waaayyyy too much free time on your hands.

Eh, took me like 15 minutes. I just copy/pasted in excel.

Ignore the haters, ACC. Thank you for allocating your time to this. 🙂

Noticed USC’s Alexei Sancov is no longer on the list, despite being right near the cutoff line. Harbinger of more bad news to come?

No, he just didn’t make the cut.

It seems that USC didn’t have a good year, for some reason.

a little biased, but most of the big names have gone nice PRs this year – Vissering, Grissom, Miljenic, Valente, Koenigsberger. Mulcare hasn’t but was a fast 1:38 mid-season. Johannson (freshman) had a nice 500 at Pac-12s. I’d say the only big name who hasn’t looked good is Sancov.

The problem is they lost 4 A-final sprinter types from last season – impossible to replace.

I wonder if a swimmer on Texas ever questions if it was worth it being a qualifier who still gets cut from going to the NCAA’s?

Texas is going on a 5-peat (and has been good way longer than that), so it’s kinda been the deal there for awhile now. On one hand it would be intense and probably really fun to train with a team that deep on a daily basis, but the flip side is you potentially get cut from NC’s even with an invite.

It is what it is. At Texas (or similarly stacked teams) the only way for a swimmer to guarantee an NCAA spot is to swim fast enough to seed a scoring position. Everybody knows the deal. I’m sure it drives some healthy inter-team competition.

There are no “similarly stacked teams.” There’s not another team in the country leaving home qualifiers. It’s entirely unique to Texas (at least this year — and most years)

Maybe wouldn’t have made it if they went somewhere else

Despite the pursuit of consecutive title #5, this is the first time they’ve overqualified during that run.

6
-8
Reply
JP input is too short
Reply to  Wethorn

I thought they had to drop somebody last year for divers?

It happend more than once actually

I learned Texas had to leave 1 qualified swimmer in 2016 during the current run.

They left home a breaststroke’s one year when they were over qualified. The guy from Israel. Can’t remember his name.

John Cann in the dinosaur era was a welcome addition to UVa. Thanks Longhorns.

They especially hate it when one of the qualifiers bombs — Schooling’s 200 fly of misery or Clark Smith’s disaster 500/1650 the one year.

I don’t know how others feel about this, but it seems to me that the A-cuts are so hard that they don’t really mean much. I think the maximum number of A-cuts is in the 200 breast, with 10, and then there’s the other extreme, the 400 IM, where there are no swimmers entered with A-cuts. Most events have around 5-6. In an ideal world, I would imagine the A-cut time to be at around the 16th qualifier; in other words, all swimmers that are likely to score points.

Only thing the mean (to me), is if you’re stud enough to get them in December, you can have a committed plan to train through conference and peak at NCAAs, and not have to swim 5 200 flys in one week.

I think the intent is lower than 16th and more like 8th! Just my guess.

I think that even though the 200 breast had the most A cuts, it was still the easiest event to qualify for. 1.54.0 is over 6 seconds from the NCAA record.

I think this is an especially important point when deciding who gets in on the last line. Sprinters have an inherent advantage over distance swimmers because they can crank 5 50s in a weekend until they sneak under by a hair, while people in the 4 IM really have 3 chances max without sacrificing themselves to the swim gods.

7
0
Reply
JP input is too short
Reply to  Anonymous

And this is why time trials and last chance meets for guys that specialize in the 200s of stroke makes sense.