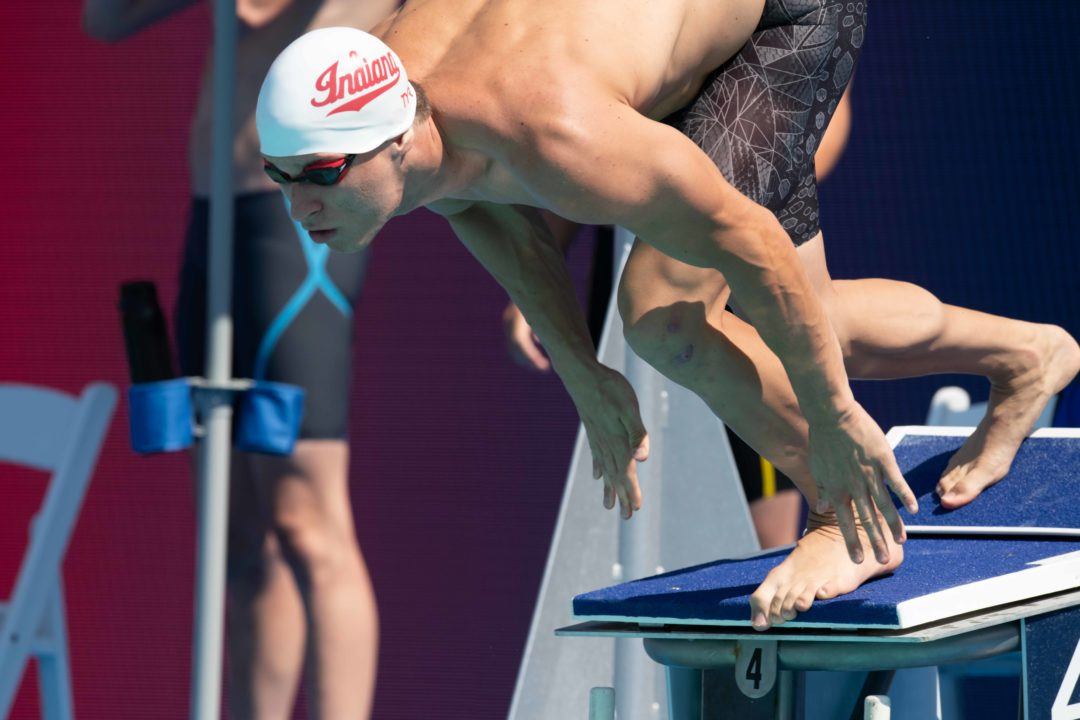 Cal leads the way in both points and individual scoring swims, but Texas and IU should both make up serious ground on diving. Adding in returning diving points from last year would have IU winning by 14 over Cal, with Texas 10 points back of California. Archive photo via Mike Lewis/Ola Vista Photography

This morning, the NCAA released its pre-cut psych sheet for the 2019 men’s Division I NCAA Championships. We’ve already projected the cut lines, and you can view them here.

While no cut lines have been made official, we can still score out the psych sheet pretty reliably – the cut line usually falls somewhere around 30, meaning the top 16 seeds should be unaffected. Our resident numbers expert Andrew Mering has already tallied up the points, setting up the true Texas-Cal-Indiana showdown we’ve all been waiting for.

The big wrinkle not included in these projections is diving. Texas scored 81 diving points last year, and should return all 81 after their top three divers qualified for NCAAs yesterday. Indiana scored 98 diving points a year ago, but did graduate 36 of them with Michael Hixon. Cal didn’t score any dive points, but did have one diver qualify for the meet – he’s booked a repeat qualification this year.

The other factors are how much each team rested for their conference meet, whether athletes are seeded at fully rested times or mid-season times, and just how well each team traditionally shows up for NCAAs.

View the psych sheets themselves here

Cal leads the way in both points and individual scoring swims, but Texas and IU should both make up serious ground on diving. Adding in returning diving points from last year would have IU winning by 14 over Cal, with Texas 10 points back of California.

Texas will also have to make some roster decisions. They’ve got 20 men invited, but the roster caps them at 18. Complicating matters is that the 20-person figure is swimmers only and doesn’t include their three divers. Since the divers are all returning scorers, it seems pretty likely all three will make the roster. Divers count as half an athlete towards the 18-person roster cap, so Texas will essentially have to cut four swimmers – leaving home four men who were invited to NCAAs, but can’t fit on Texas’s roster.

The lowest seeds of Texas’s invited swimmers are the following:

I haven’t heard Apple’s name besides Cody’s vlogs since Pan Pacs. He’s a huge threat in everything he’ll swim

If they are as comfy as my tempurpedic I would.

I’m actually gonna hibernate on them.

I use subjective ups/downs based on this year’s and last year’s times…which I think is more accurate than just scoring the psych sheet, which tends to ignore what swimmers did last year and hence what they’re capable of.

Agreed probably more accurate. How did you score diving?

Diving was a bit more guesswork since Zones aren’t done, but I scored Texas divers 4 up, 3 down, Indiana divers 4 up, 1 down, Cal divers with nothing.

Don’t forget Tenessee with 5 divers up and 3 down OH YEA we gonna rock the diving pool. Gotta love the creative outside the box thinking of coach Kreditch he is a master manipulator of the system…just a matter of time until he gets Bill Gates grandson admitted to Tennessee on a diving scholarship!

Finally got around to including NC State in this and I have them 4th with 361 points, way behind the big 3. That generously assumes 10 up and 10 down. Not sure what the “changing of the guard” that Wolf of Raleigh is claiming. Pack better watch out that Florida doesn’t knock them down to 5th.

Wolf will say something about how the team has the flu even though they got flu shots and if they fall to 5th or 6th it is because of that….

Texas definitely has some upside over seedings: For example 200 MR should out do 2 pts (16th). They don’t have to win all the relays, but there is room to move up in all.

It will be interesting to see how the Freshmen handle the pressure.

That could be an interesting conversation in the Collins family for TX.

I was thinking the same thing!

Please explain to those of us not aware –

Wyatt Collins is the assistant coach, jack collins (brother) could be left off the team

Ah, of course – thanks. Lots of family connections — I think Eddie’s grandson was ultimately fell a little short. i think he went 19.6

Uh oh… put his name in the hat for the unc job then.

Not the week to be pointing out family connections especially since Texas was named in the bribery scandal. Sounds like all it took was being given preferred walkon status as a recruit for a few of these kids to get in.

Um, except those involved in the scandal were fraudulently given “recruited athlete” status to assist with admission even if they were never a real athlete (or, at least, not a recruited athlete). But the two family members that we’re discussing here (Wyatt’s bro and Eddie’s grandson) are very real and very good swimmers. Otherwise great comparison!

Agree with both of y’all. Speed Racer, you are right, bringing up nepotism this week is a bad thing…. and SwimGeek, you are right since the athletes you speak of are super fast and would be on any other team’s NCAA squad, at least as part of a relay.

Plus, there is the other obvious thing about it being Texas… not MIT, Princeton, Cal Tech, etc.